Restaurant: Mitsitam Cafe at the National Museum of the American Indian (Washington, D.C.) 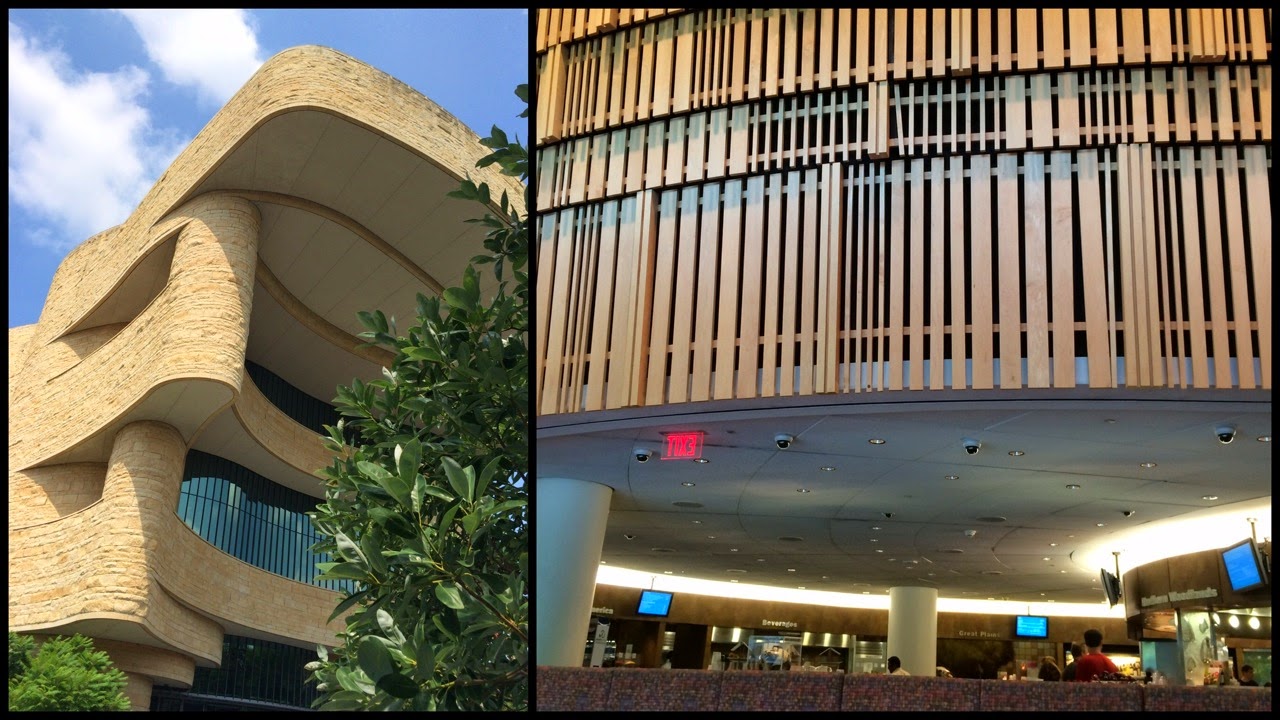 Summer is for...travel, and a great many travelers find their way to my city, Washington, D.C. The National Mall, basically D.C.'s front lawn, is D.C.'s biggest tourist magnet, surrounded by the free-admission Smithsonian museums, the National Gallery of Art, the Capitol, White House and numerous monuments. Given the influx of camera-toting, souvenir-t-shirt-wearing visitors, locals tend to avoid the area unless they are out for a midday jog or ultimate frisbee game.

But when it comes to food, we all have to eat, and there's one place on the Mall I think both tourists and locals should get to know: the Mitsitam Native Foods Cafe in the Smithsonian National Museum of the American Indian.

A museum cafeteria probably isn't where you'd go looking for haute cuisine. When I think of such places, I have a vision of a big yellow tray on which I might put a sandwich, salad and some fries--nothing particularly notable. At Mitsitam, you still get a yellow tray, but from there things get much more interesting.

Most of the larger Smithsonian museums have their own cafes, either innocuous ones serving basics or food-court-style places with name-brand vendors. In contrast, Mitsitam Cafe serves the most remarkably creative and fresh cuisine I've ever seen coming out of a museum. If you're one of the 25 million annual visitors to the National Mall and find yourself in need of lunch, this is where you should go.

The cafe is structured around five food stations serving dishes inspired by the cuisines of native cultures from five regions: the great plains, the Northern woodlands, the Northwest coast, Mesoamerica (i.e. Central America) and South America. Each station offers a few entrees, hot and cold sides and desserts. You're free to design your meal any way you like: choose selections all from one station or mix-and-match from several. The cafe's chef, Richard Hetzler, helped research and develop the restaurant's concept (that alone is a tip this a special place; how many museum cafes are run by executive chefs?).

In addition to offering regional variety, Mitsitam's menu changes seasonally. Recently, the menu shifted from spring to summer (so some of the dishes I discuss below are no longer available, but this will still give you a feel for the types of food to expect).


One of the greatest things about the offerings at Mitsitam is the variety of unusual, fresh ingredients. Fiddle heads, for example, is one of those hard-to-find ingredients you read about each spring but never see at the grocery store and rarely at the farmers market. Well, here are the little green fern tendrils, nestled within a salad caramelized pearl onions, hominy and aged sherry vinaigrette. Speaking of hominy--another not-so-common vegetable--the grain also shows up braised in a tangy side with candied bacon and wild onions (in case you're wondering, hominy is just corn soaked in an alkali solution that causes the grain to puff up).

Both the fiddle heads and hominy come from the Northwest Coast station, which features one of Mitsitam's best-known entrees, wild salmon grilled on a cedar plank. When I had it from the spring menu, it was served with a fresh horseradish relish, which complemented the nicely cooked fish without overwhelming it.

The Northern Woodlands station offers wonderful soups. On offer now is a chilled corn and heirloom tomato soup that sounds really good. The tangy-sweet pickled beet soup with cherry compote and dried corn crumble was one the best things I've had at Mitsitam. The sides from this station can be hit-and-miss though. A wild rice and watercress salad was quite good, but a grilled spring squash salad was served with corn that proved hard to eat, as the corn was served still on the cob (how does one eat such corn in a salad? pick it out with your fingers even though it's coated in dressing? try to cut the kernels off--a tricky prospect with a table knife). A recent side of roasted kohlrabi was beautifully flavored with apple and cider reduction, but struck me as undercooked, as the star vegetable was quite tough.


Another highlight are the tacos from the Mesoamerica station, which rotate with the season. On offer now are chicken with prickly pear mole and goat with plantain and poblano salsa. If you've never had goat, I say give it a try. The tender, shredded meat reminded me of braised beef and was my favorite of the two. Guacamole, crumbled cojita cheese and a selection of salsas are offered as garnish. I've never had coconut in a taco before, but the coconut-chili salsa was perfect with both meats.

The line at the Great Plains station is always the longest. Probably because this is where you can get an Indian fry bread taco or a buffalo burger. Maybe if I return during non-tourist season, I'll give this station a try.


A potential drawback of Mitsitam, especially for families, is the price. The sourcing of this array of fresh ingredients surely doesn't come cheap, and the cost of entrees generally runs in the teens with some in the twenties. So lunch for two can easily hit $40 (discounts for federal employees and Smithsonian members help a little bit). Still, if you're willing to splurge, you're in for a treat, and given the cuisine's connection to the subject-matter of the museum, it's a particularly tasty way to further experience American Indian culture.