Fajitas: From Steak to Everything 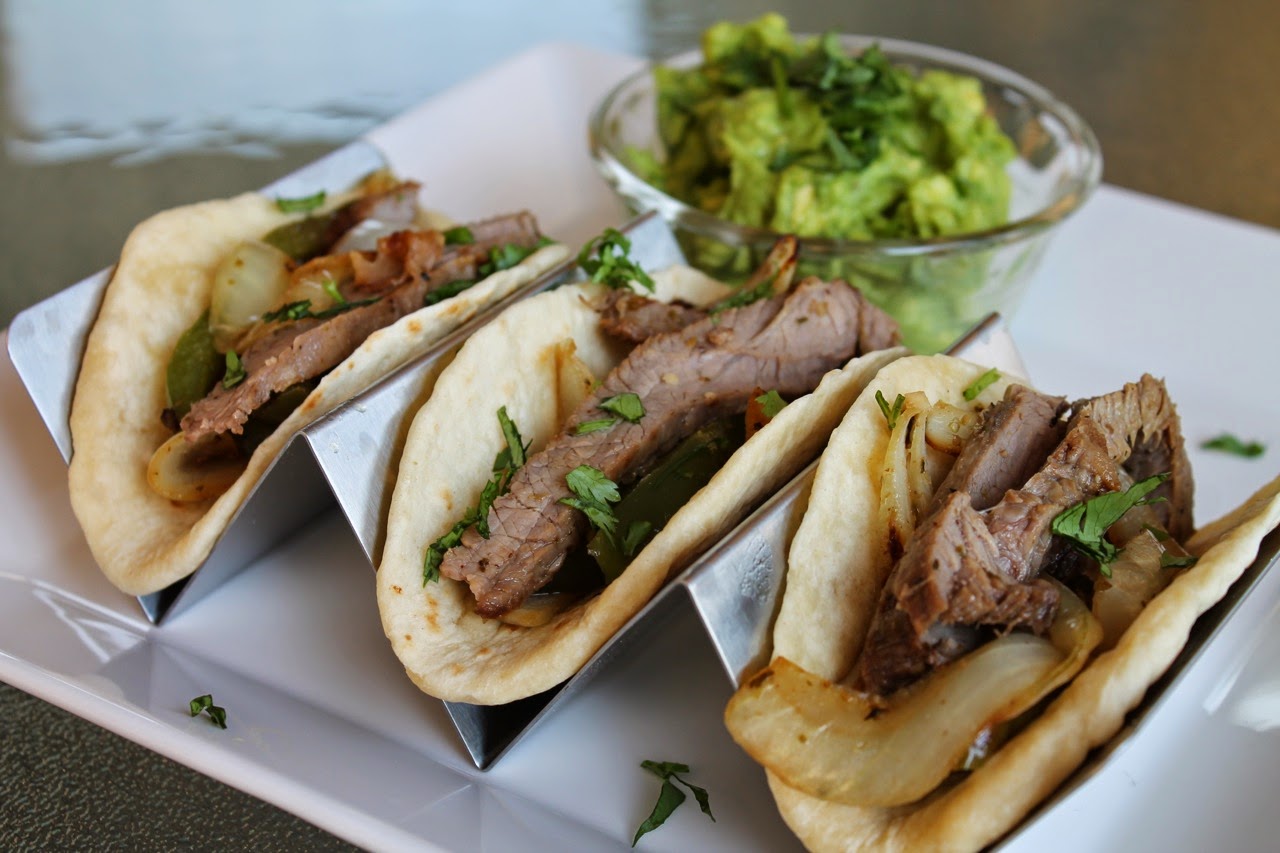 Although I haven't studied this enough to know if it's absolutely true, it seems to me that there's a greater tendency for food words of foreign origin to be misused, and thus more likely to evolve in meaning than words that have been in English a long time.

Take the French word "pommes" for example. Americans who do not speak French (me included) may be most familiar with this word from "pommes frites," which means fried potatoes. Because "frites" is obviously the fried part, they may logically assume "pommes" means potato, and thus apply it to other uses. However "Pommes" is actually the French word for "apples." "Pommes de terre" is the French term for potatoes, which literally means "apples of the earth." In the construction "pommes frites," the "de terre" has just been dropped, but without a working knowledge of French, you might not know that it needs to be put back if you want to talk about a potato and not an apple.

There are several Spanish food terms that I've noticed get appropriated for other uses. One is "queso," the Spanish word for "cheese," but which has come to mean "spicy cheese sauce" in American Tex-Mex restaurants, opening the door for potential confusion if one asks for "queso" expecting to get perhaps shredded cheese (which is, actually, what they asked for). Maybe in the not-too-distant future, "queso" could signify any type of spicy appetizer dip, including one without cheese? Vegans are already at work on this.

A Spanish term that has evolved further is "Fajita." Fajitas are one of those Tex-Mex dishes that isn't really Mexican. In The Tex-Mex Cookbook, Robb Walsh writes about the dish's Texas origins. It was originally a dish made by ranch hands from unwanted beef cuts. Restaurants began serving the dish in the 1960s, and the term "fajitas" was popularized in the 1970s.

In Monday's article on Dan Jurafsky's book, The Language of Food, I mentioned how our language around food evolves just as our food evolves. Fajitas are an excellent example of this.


Fajitas became a major food fad in the mid 1980s. Still popular today, they were everywhere at one point. I remember my introduction to the dish being a "fajita kit" you could buy at the grocery store with raw meat and vegetables to be grilled on the stove and stuffed in tortillas. Every Mexican restaurant had a version of fajitas. Even McDonald's, which obviously isn't a Mexican restaurant, began selling chicken and sometimes steak fajitas.

But wait...when did chicken enter the picture? Just as I wrote Tuesday about how "bruschetta" evolved from meaning garlic toast that might have a topping to mean garlic toast with topping, the term "fajita" evolved to mean not just the steak in the tortilla but the steak and the tortilla and garnishes, usually grilled onions and bell peppers, but also possibly salsa, cheese, beans and guacamole. Consequently, with the dish "fajita" established as meat + tortilla + garnishes, other meats could be substituted for the skirt steak and the dish was still called fajita. In fact, the meat could be dropped all together, the dish known as "vegetable fajitas." Today there are all sorts of variations on fajitas, including the original steak, but also chicken, shrimp, barbecue ribs, vegetable and combinations.


There's an even newer use of the term I've observed, possibly a further evolution, entirely divorced from meat and tortillas.

In recent years, Chipotle Mexican Grill has emerged as America's leading fast-casual restaurant, sparking a revolution in the concept, quality and expectation of what fast food means. Although the menu is different now, when I first became a Chipotle customer in the early 2000s, the menu included "burritos" and "fajita burritos," the former included beans, while the latter came with grilled onions and bell peppers. Eventually, Chipotle dropped the "fajita burrito" from the menu, but kept the vegetables, the idea being that you can order just a "burrito" and get it with beans or vegetables (or both). But guess what people starting calling the grilled onions and vegetables? Fajitas.

We go to Chipotle a lot, and I hear it all the time. A customer orders a bowl with rice, chicken, black beans and, oh, "could I have some fajitas too?" indicating the grilled vegetables. Is it possible this use will grow beyond Chipotle? Perhaps, especially given that's Chipotle's influence on our food has grown with the chain, which has 1,600 (and growing) locations, plus imitators and restaurants applying a similar concept to salad, pizza, Mediterranean, Indian and Southeast Asian cuisines.


Steak Fajitas
Marinade adapted from Marinated and Grilled or Broiled Flank Steak recipe by Mark Bittman, How to Cook Everything

1. Combine the marinade ingredients in a shallow bowl. Add the steak, turning to coat in the marinade. Marinate for about 30 minutes, up to 1 hour.

2. Heat olive oil in a large frying pan over medium-high heat. Add the onions and bell pepper. Season with oregano, cumin, salt and pepper, to taste. Sauté, stirring occasionally, until softened and browned in places, about 10 minutes.

3. Heat oven broiler. Place steak on a baking sheet or broiler pan and broil 4 to 5 minutes per side, turning once (alternatively, if you have a grill, grill the steak over hot coals). Set aside to cool a couple minutes, then slice against the grain into strips. Serve steak and vegetables with homemade flour tortillas, fresh guacamole and a sprinkle of cilantro. 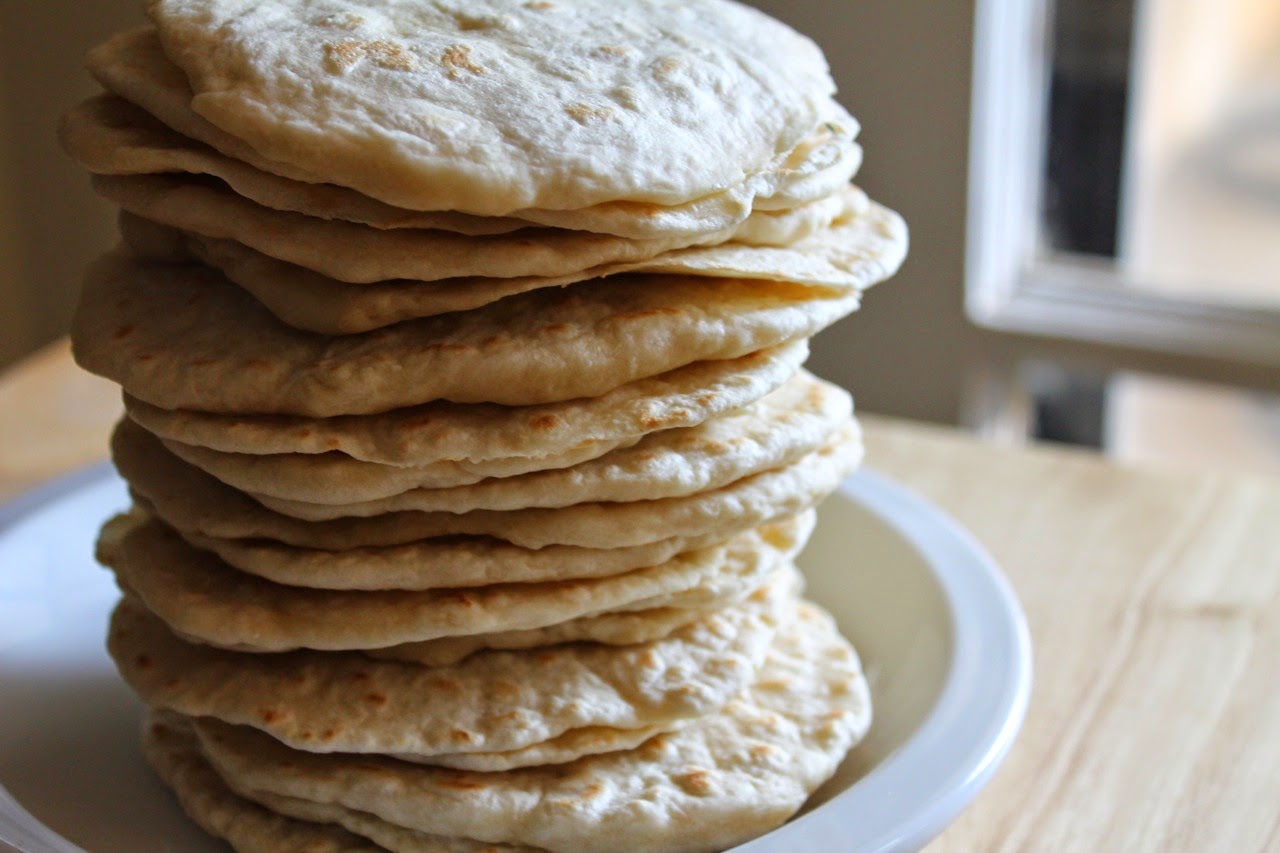 Homemade Flour Tortillas
Adapted from a recipe by How to Baker

1. In a medium bowl, whisk together flour, salt and baking powder. Add the vegetable shortening and use a pastry blender or your fingers to combine. Add the water, a little bit at a time, mixing in each addition to form the dough until it is soft and no longer sticky. Transfer dough to a lightly floured surface and knead for 2-3 minutes. Add additional flour if necessary to keep dough from being sticky. Cover the dough with a damp kitchen towel and allow to rest for 10 minutes.

2. Break off pieces of dough and roll into golf ball-size pieces. Cover with a wet towel and let the dough rest for another 10 minutes.

3. Heat a large frying pan over medium heat. Working with one piece of dough at a time, dust the dough with flour and gently press it into a small disc. Flatten the dough in a tortilla press, then

4. Heat griddle pan over medium heat. Working with one piece of dough at a time, dust the dough with flour and gently press it into a small disc, then flatten in a tortilla press. Cook the tortilla on each side for about 10 to 20 seconds. Transfer to a plate and cover with paper towels to keep warm. You should be able to cook them in batches of four.

Combine avocado and lime juice in a medium bowl. Mash with a fork or pastry blender until creamy but still a bit chunky. Add the cilantro, salt, chili powder and onion and stir to combine.
Posted by Cook In / Dine Out at 12:00 AM