Continuing this week's theme of dining in the Southwest, here is a rundown of all the great food that Chris and I enjoyed when we were in Dallas recently. For two guys who love good Mexican and barbecue, this was a great place for us.

When we go to New York, we love starting our day with a diner breakfast, so we were very excited to find a great diner in Dallas' West End. Ellen's Southern Kitchen fit the bill perfectly. The breakfast menu is short but varied, including the usual diner staples like pancakes, french toast and omelets, which we sprang for with cheddar cheese, onion and ham or bacon. There's also interesting southern dishes like Cajun shrimp & grits or poached eggs & grits ("grits rule" is the restaurant's motto). There's even a couple of Mexican choices.

Perhaps your trip to Dallas includes a spot of shopping at the Northpark Center, a varied collection of shops from the mid-range (American Apparel, Anthropologie) to the high-end (Gucci, Versace) anchored by Dillard's, Macy's, Neiman Marcus and Nordstrom. After a few laps around the square mall, you'll be ready for lunch. La Duni Latin Kitchen and Coffee Studio isn't a bad place to cool your heels. I had a really good roasted turkey sandwich on wheat bread with green apples, cherries, pecans, white cheddar and lime-mustard vinaigrette. I was good and got mine with a side salad, but I was so glad Chris sprang for the yucca fries, since they were really good.

For something a little more elegant that's also conveniently located in the Uptown shopping area of stores clustered around Travis and Knox Streets, Le Bilboquet is fine place to get lunch. If you can score a front patio seat on a nice day, the people watching can't be beat. Although they were out of the potato-crusted snapper with ratatouille and wine sauce I wanted to order, I really enjoyed the grilled salmon with bearnaise, braised endive and roasted tomatoes. The fish was perfectly grilled and I loved the vegetable accompaniments. I'd never had endive braised before and it was really good, with its bitter edge noticeably reduced by the cooking. The crumb topping on the roasted tomatoes was a nice touch.

For something on the opposite spectrum of elegance, but absolutely divine on the scale of flavor, we hit up the Lockhart Smoke House in Plano, Texas. Probably the best barbecue we'd ever had. It was so good, I gave it its own post.

We really lucked out that the weather in Dallas while we were there was gorgeous. Sunday was a perfect 70 degrees, sunny with a light breeze. Since we were there at the beginning of spring--and Dallas, like a lot of the U.S. had a cold winter--it felt like the whole city came out to play that day. While strolling through the Klyde Warren Park, we ducked into Savor for drinks. The modern glass building makes it feel like you're almost still outside. Although we were tempted by the snacks on its "gastropub" menu, we just had glasses of white wine here, but I didn't want to exclude it, since it was a cool spot. 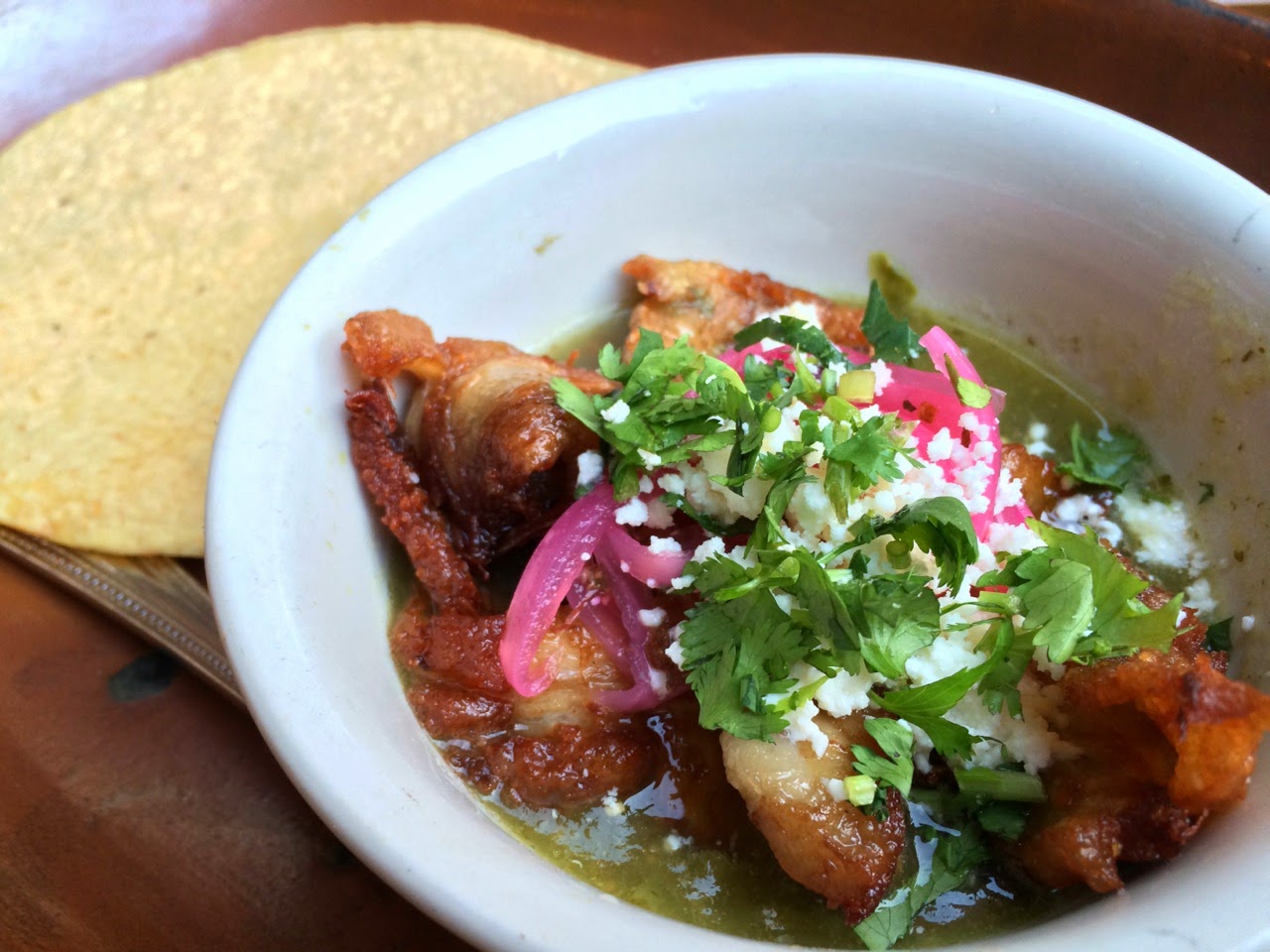 Let's not kid ourselves. When Chris and I are this close to the border, at dinner time we want Mexican. And Dallas has some great Tex-Mex establishments. We hit up Meso Maya on our first night and weren't disappointed. I'd read the chicharrones were really good, so we started with a plate of the pork dish served with salsa verde and corn tortillas. Meso Maya makes their chicharrones with pork jaw, instead of pork skin, so the results are meatier and crispy around the edges rather than crunchy all throughout. My pollo con mole was tasty, but the Chris's cochinita pibil was even better. The Yucatan-style braised pork came with an orange-anchiote sauce, pickled red onions, habanero salsa and a side of homemade corn tortillas, which made it easy to treat the dish sort of like fajitas.

At Jorge's Tex-Mex Cafe, we had simpler meals--I had chicken enchiladas and Chris sprang for the chicken Mexican mini tacos--but the food no less satisfying than at Meso Maya, as everything was well made. One of my gripes about Mexican food in D.C. is that the sides of beans and rice are rarely very interesting. Here, they were excellent, as they should be. A caution about Jorge's: they tend to close early on some nights (7 p.m. on Sundays, 8 p.m. Monday-Wednesday), so plan accordingly.


Both Meso Maya and Jorge's have a great bar menu with interesting margaritas. At Meso Maya, Chris enjoyed a refreshing cucumber margarita, while I loved the avocado margarita served on the rocks with tequila blanco, pineapple and fresh avocado. At Jorge's we enjoyed the smoky-spicy BBQ margarita, made with mezcal and barbecue sauce and garnished with a slice of bacon.