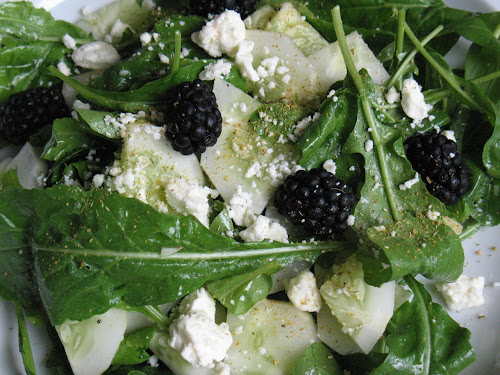 On a recent New York trip, I picked up fennel pollen at Eataly, Mario Batali's Italian mega-market just off Madison Square Park. Awhile back, I'd been making a recipe (coincidentally, one of Batali's) that called for fennel pollen and I couldn't find it anywhere. So when I saw it at Eataly, I picked some up in case I ever needed it again.

Of course, I tried a little bit to see what it was like. Unsurprisingly, a lot like fennel, although more intense than you would expect and even a little sweet. A little goes a long way. For its inaugural use in my kitchen, I opted to sprinkle it over a salad with blackberries, cucumber and arugula. Not wanting to overpower it, I kept the dressing very basic.

This salad features another unique find: lemon cucumbers. My farmers market has them sometimes. They are thicker and shorter than your regular cucumbers (so basically more spherical) and have a yellow-white skin. They don't really taste different than other cucumbers and they certainly don't taste like lemons, just resemble them.

Whisk together the olive oil, vinegar, salt and pepper to make the vinaigrette. Combine the other ingredients in a large bowl and toss with the vinaigrette. After plating, sprinkle lightly with fennel pollen.