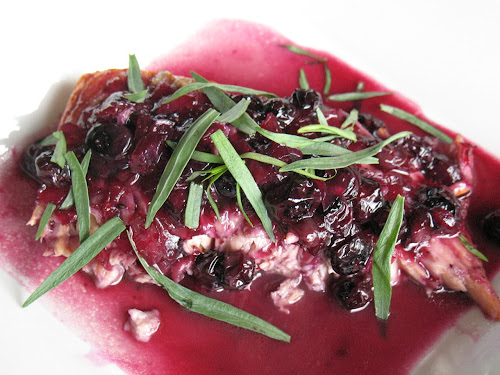 This week, I'm going to focus on a getting up a few dishes I've made recently with berries, specifically blueberries and blackberries, which are in season right now, but probably not for much longer.

This dish appeared recently in the New York Times. It strikes me as a very "Oregon" dish--salmon and blueberries are, after all, pretty abundant there.

A neighbor told me how much she liked this dish, but noted that it has a lengthy cooking time. In adapting the recipe, I was able to save some time by broiling the salmon, instead of roasting it. That I was only making half of much blueberry sauce also probably saved some time. Additionally, I brightened the dish a bit with some fresh tarragon.

1. Preheat the broiler. Position oven racks 4 and 10 inches from broiler.

2. In a medium saucepan over medium heat, combine onion, wine, vinegar, thyme, cinnamon and a pinch of salt. Simmer until most of the liquid has evaporated (about 1/4-1/3 cup liquid remains), about 15 minutes. Remove and discard thyme sprigs and cinnamon sticks. Add blueberries, butter and honey, cooking until the berries soften and the sauce turns a deep pink, about 4-5 minutes. Set aside.

3. Place salmon on oiled rimmed baking sheet, skin side down. Spray exposed flesh side with olive oil. Broil 4 inches from broiler about 5 minutes. Turn fillet over and broil another 5 minutes. Remove from oven and discard skin.