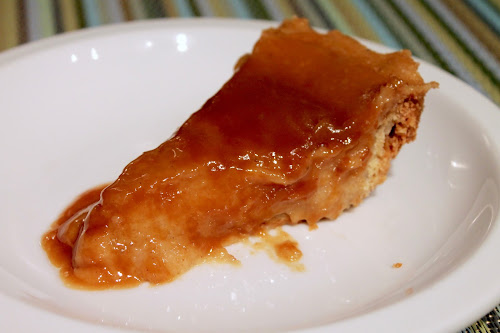 Two years ago, I shared a recipe for Apple Custard Pie with Gingersnap Crust, my attempt to make an apple pie with a texture more like pumpkin pie. The apple custard was a great discovery--it's like rich apple sauce, sweet and satisfying but still somehow "lighter" than a pumpkin filling. That pie was very good, but I wanted to revisit it and make some changes. 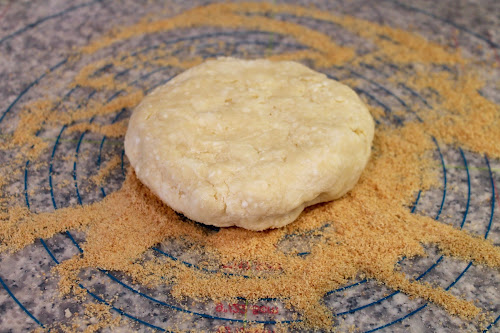 First, I wasn't fully sold on the crust. It was delicious, but it burnt a bit in the oven and was hard to cut. For this pie, I wanted to use a more traditional pie crust. When looking at options in the Cook's Illustrated book, The Science of Good Cooking, I came across the rather clever idea of rolling the crust out using graham cracker crumbs. This adds a bit of that "cookie" flavor while still having a traditionally flaky crust. I also decided to add a caramel sauce that would form layers above and below the apple-custard filling. The caramel sauce was a big plus, giving the pie a needed richness boost. I had also considered topping this with meringue, but decided it really wasn't necessary (plus meringue is difficult to deal with for Thanksgiving, as it should be done just before serving for best results). So, no meringue, but I didn't miss it. 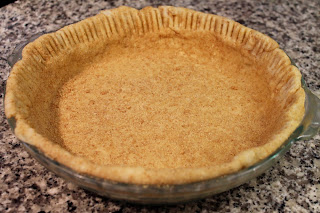 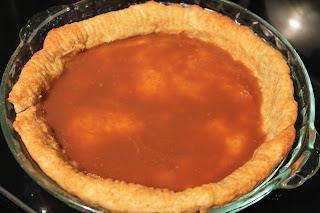 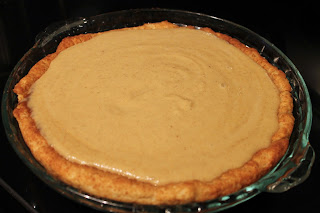 Admittedly, this dessert has a lot of steps. I cut a few corners when I made it, and I regretted this, as the pie was a bit "runny" because I hadn't allowed the custard to completely chill nor the caramel sauce. The next day though, after spending the night in the fridge, it was perfect.

If you were going to make this for Thanksgiving, I suggest making it ahead of time, given all the steps involved. For example, you could do the following the day before, then on Thanksgiving Day, just serve it: 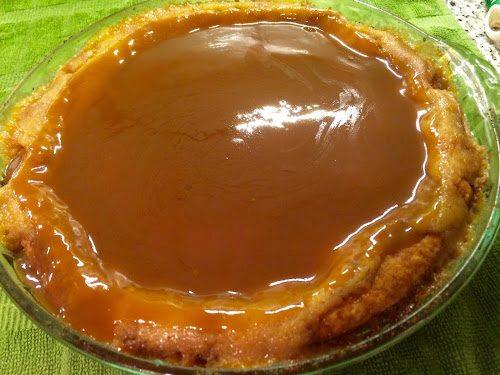 Note: Take note of the time required before making this pie, as it requires not just cooking time but chilling and cooling time too (see suggested schedule above).

1. Add 3/4 cup flour, sugar and salt to the bowl of a food processor and pulse a few times to combine. Scatter the cold butter cubes across the top of the mixture and process until the butter is incorporated and the mixture forms uneven clumps with no remaining floury bits, about 10 seconds. Scrape down the sides of the bowl with a spatula, sprinkle remaining 1/2 cup of flour over the dough and pulse until the mixture has broken up into pieces and is evenly distributed around the bowl, about 4 to 6 pulses.

2. Transfer mixture to a medium-size bowl. Sprinkle with 2 tbsp. of ice water and the vodka. With a spatula, use a folding motion to stir and press together the dough until the dough sticks together. Add a little additional ice water (no more than a tablespoon) if the dough doesn't come together. Using your fingers, form the dough into a disc about 4 inches across. Wrap the dough with plastic wrap and chill in the refrigerator for at least 1 hour.

3. Set dough on counter to warm up for about 10 minutes. Spread half the crushed graham cracker crumbs on the surface where you'll be rolling out the pastry. Place the dough in the middle of the crumbs, sprinkle with some of the crumbs and roll out, sprinkling with crumbs as you roll until the dough is a 12-inch round about 1/8 inch thick. Carefully transfer the rolled dough to a pie plate (I like to wrap the dough around the rolling pin and then carefully unroll it into the plate, gently lifting up the edges to ease the dough into the corners of the plate). Trim the overhang to about 1/2-inch evenly around the pie plate. Fold the overhang under itself to the edge of the dough is flush with the rim of the pie plate. Flute the edge of the dough or press with the tines of a fork (I always do the latter as my "fluting" skills aren't up to snuff). Chill the pie dough for at least 15 minutes.

4. Preheat oven to 425 F with oven rack in middle position (depending on how long it takes to heat your oven, you may want to start the preheating while the dough is first chilled, before rolling it out).

5. Line the top of the pie shell with aluminum foil and weight it down with pie weights or spare change (don't worry--the money won't melt at this temperature). Bake until the dough is dried out, about 15 minutes. Remove the weights and foil and continue baking until the pie shell is a golden-brown color, about 10 minutes longer. Remove from oven and allow to cool completely, about 1 hour.

7. Pour half of the caramel sauce into the baked pie shell and return pie shell to refrigerator for at least 10 minutes before adding the filling below. Refrigerate remaining caramel sauce until ready to use (you may need to gently reheat it in a microwave before pouring it over the pie below).

8. Heat a large saucepan over medium-high heat. Add apples and 1/3 cup water. Cover and cook until the mixture boils. Reduce heat to medium-low and simmer until the apples are very soft, about 15 minutes. Using an immersion blender, puree the apples until they are very smooth (alternatively, transfer to a food processor, puree until very smooth, then transfer mixture back to the saucepan). Cook apple puree over medium-low heat, stirring frequently, until mixture is thickened (it should be as thick as pumpkin puree). You should have about 2 cups (16 oz.) of puree (don't fret if you have a little less). Set aside.

9. Combine apple puree, brown sugar, cinnamon, ginger, nutmeg, salt and cornstarch in a large saucepan over medium heat. Once the mixture begins to sputter, cook, stirring constantly, for about 5 minutes. Add the milk and heavy cream and cook until the mixture simmers.

10. Add the lightly beaten egg yolks to a medium bowl. Whisk in about 1 cup of the hot apple mixture, then whisk the egg mixture into the saucepan with the apple mixture until well combined. Remove the saucepan from the heat.

12. Pour the hot apple mixture on top of the first layer of caramel in the pie shell. Bake until the filling is puffed and dried out on top, about 25 minutes. Cool on a wire rack then refrigerate about an hour. Pour the remaining caramel sauce on top of the cooked filling and chill a final 15 minutes to set the caramel before serving (or chill overnight and serve the next day).