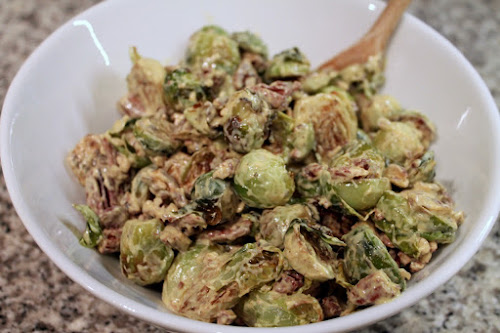 I've always liked Indian food, but I made a particular effort to get to know it better this year. In April, I wrote about D.C.'s Indian restaurant scene and, at at that time, although I didn't blog about it, I also experimented with cooking Indian dishes like Chicken Tikka Masala, Palak Paneer and Dal. I was struck by the quantity of spices that went into those dishes--tablespoons of things I've typically measured in portions of teaspoons--but that's what makes Indian food so intense.

Dial back that intensity a bit, but maintaining the flavor profile, and there's no reason Indian flavors can't make themselves at home on the Thanksgiving table. Although a lot of traditional Thanksgiving dishes can be bland, it's also an eclectic spread. And that eclecticism should make recipes flavored with curry, ginger, garlic, garam masala and the like at home with your typical stuffings, turkey and gravy. 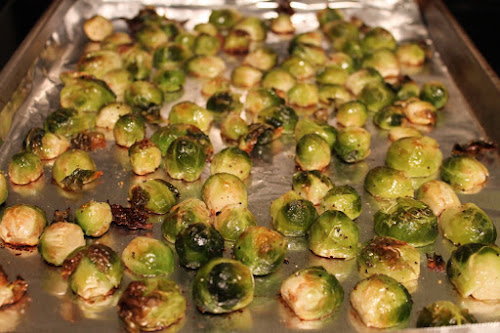 As far as what Indian cooking can be, this dish is very simple, making it an ideal Thanksgiving side. Basically, I took everybody's latest favorite vegetable, the Brussels sprout, and tossed it with yogurt flavored with honey and curry powder. It's simple, delicious and healthy. An easy vegetable side if you're looking to spice things up a bit. If you like this idea, stay tuned for another Indian-themed Thanksgiving dish coming later this month.

1. Preheat oven to 350 F. Spread pecans on a baking sheet in an even layer. Toast for 5-6 minutes until fragrant (be careful not to burn them). Remove from oven and allow to cool. Transfer to a cutting board and coarsely chop. Set aside.

2. Increase oven to 425 F. Combine Brussels sprouts, olive oil, salt and pepper in a large bowl and toss to coat. Spread sprouts in a single layer on a baking sheet, rotating any sprouts so the cut-side is down. Roast until the sprouts have softened and browned around the edges, about 20-25 minutes. Remove from the oven and allow to cool slightly.

In D.C., Indian Food Crosses Over to the Mainstream