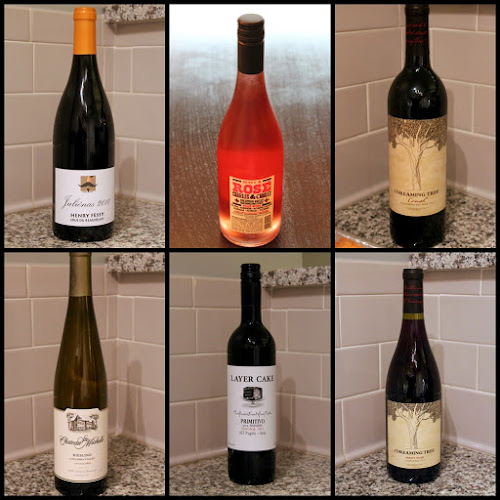 8-2-Eat is my food-focused list series. A perfect Friday distraction. This week, it's my 2015 Thanksgiving wine recommendations, all of which are under $20.

First off, I want to suggest you listen to My Poor Liver's 2014 Thanksgiving episode, in which Neil gives the best overview of Thanksgiving wine pairings that I've come across. Many of the wines listed below are because he recommended them. That's really all you need to know, but if you're still looking for ideas after that, you can check Imbibe's article on affordable holiday red wines under $25 or my wine tips from 2014 or 2012. Below then are my 8 recommendations for this year. I've included an approximate retail price based on prices I saw online, but you can often find them for less.

Charles & Charles, Rosé, Washington, 2014 Rosé has become a popular summer wine, but it's a good match for Thanksgiving dinner as well. It has a bit more heft than a white wine, but not the tannic bitterness or the level of depth of a bold red wine. This particular rose, a collaboration between Washington state winemakers Charles Smith and Charles Bieler, is mostly syrah (72%) blended with mourvèdre, cabernet sauvignon, grenache, consult and counoise. It's quite dry for a rosé. I chose this because I read that rosé is good with spicy food, such as Indian, and several of this year's Thanksgiving recipes have an Indian inspiration (Nan Bread Stuffing, Honey-Yogurt Brussels Sprouts). ($13)

Dreaming Tree, Crush Red Wine, California, 2013. Dreaming Tree has become like my guilty pleasure lately. Don't let the fact that it's Dave Matthews' winery stop you. Their wines are affordable and very tasty. This is the sort of red wine for bold red wine fans (like me) that could also work with a meal like Thanksgiving with a diversity of complex flavors. The key here is that the wine is more of a fruity-bold than a tannic-bold, which helps it pair better with foods, especially those with sugars (like Roasted Sweet Potatoes with Mole and Queso Fresco). Crush is mostly merlot (59%), with petite sirah (16%), zinfandel (15%), syrah (4%) and other (6%). ($15)

Dreaming Tree, Pinot Noir, California, 2013. Yeah, it's Dreaming Tree again, and I'm not apologizing for it. This pinot noir is also really good and a nice exception to the general rule that you have to spend over $25 on pinot noir for it to be worthwhile. A wonderfully fruity on-the-bold-side pinot. ($15)

Chateau Ste. Michelle, Riesling, Washington, 2014. From one of Washington State's best-known wineries comes this wonderfully balanced riesling. Riesling gets a bad rap sometimes for being too sweet, but the wine actually runs the spectrum from sweet to dry, and many winemakers are including a chart on the back of their riesling bottles to show where on the spectrum a particular wine may fall. This one is pretty much in the middle (sometimes referred to as "off dry"), giving a nice balance of fruit, sweetness and mineral flavors. It's also quite affordable. ($9)

Henry Fessy, Juliénas Crus du Beaujolais, 2011. I've long maintained that I don't like beaujolais. But when I, and many others, say that, we're actually referring to beaujolais nouveau, a red wine made from gamay grapes that is bottled, sold and consumed very young. I don't really like young wines. A cru beaujolais, on the other hand, while still a lighter red, is significantly bolder than beaujolais nouveau, more like a pinot noir. Not necessarily my favorite, but I can see this making a good pairing with Thanksgiving dinner. ($18)

Layer Cake, Primitivo, Italy, 2012. Although officially primitivo, an Italian grape, and zinfandel, a California grape, are classified as separate grapes, DNA analysis has shown they are the same. According to Layer Caker, their Primitivo wine is the first to officially make this connection on their bottle label. Interesting fact, but how does it taste? Bold and spicy as a zinfandel should. ($14)

M. Plouzeau, Chinon Rive Gauche, 2011. Cabernet sauvignon is my favorite red wine, but as I've probably mentioned before, it's big flavors and tannins are too overwhelming for Thanksgiving. But...that doesn't mean all cabernets aren't welcome to the table. Enter cabernet franc, cabernet sauvignon's earthy, ripe old brother (cabernet sauvignon is a hybrid produced by chance apparently between cabernet franc and sauvignon blanc). Sure, some cabernet francs are as earthy as a barnyard, but this one doesn't go overboard in that direction. I sampled the 2011; I think that may be hard to find at this point, but the 2012 shouldn't be. ($16)

What you love.  Admittedly, I'm ending this 8-2-Eat this way because I don't have an 8th specific suggestion. But really, this is an ideal suggestion for what to drink on Thanksgiving. It's a holiday. You and your guests should enjoy yourselves, so I don't think you should be afraid to serve something that you love, even if it doesn't "fit" with what a lot of people may recommend you drink for the holiday. I'm always up for experimentation. If it doesn't seem to pair well, stopper the bottle and finish it the day after. (priceless)
Posted by Cook In / Dine Out at 12:00 AM