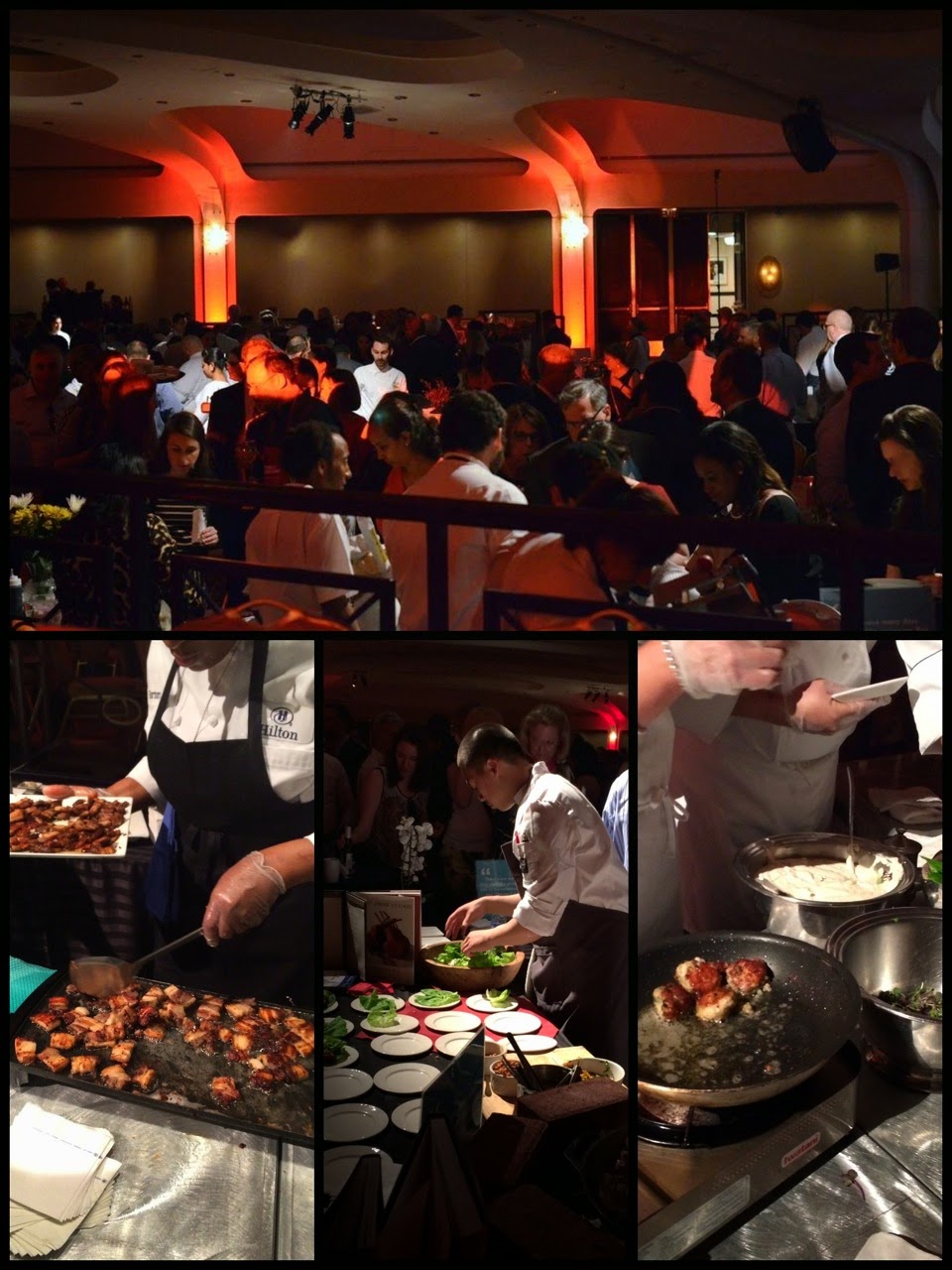 Charity dinners are rarely about the food. They're more about seeing friends, being inspired and helping to support a good cause. There's an old joke about such events serving rubber chicken, which is, unfortunately, sometimes the case.

But not the case at the Food & Friends recent Chef's Best Dinner and Auction. The event had all the hallmarks of a great fundraiser--there were speakers, a live auction, a silent auction and a raffle. But for this food lover, the real attraction was the incredible food offered in abundance from over 50 D.C.-area restaurants set up in stations around the lovingly retro Grand Ballroom of the Washington Hilton.

I was invited to attend the recent event with friends and thoroughly enjoyed the evening. Here were some of the highlights.


Start the evening with a cocktail? Why not. Mixologist Kyle McNeel of the EatWell restaurant group was mixing Flight of the Bumblebee cocktails, a tart-sweet gin cocktail with lavender honey, lemon and grapefruit bitters.

Seafood was a surprisingly abundant choice at Chef's Best, one we seemed to encounter at every turn when we first entered the ballroom. One of the evening's more unusual selections was Teddy & The Bully Bar's Smoked Calamari Salad with Shaved Fennel, Pineapple Carpaccio, Coffee Buttermilk Dressing and Burnt Lemon Fluid Gel. Also offering calamari was The Fourth Estate at the National Press Club with its Calamari Cakes in Lettuce Cups with Lime Aioli. I'm not a big raw foods guy, but I did enjoy the salmon tartare served over fresh vegetables from Urbana. Chris isn't a major seafood lover, but he enjoyed Chef Geoff's Shrimp & Grits. I also want to mention Blacksalt's delightfully seasonal Fava Bean Bruschetta with House-Cured Anchovies and Ramp Pesto. Always up for good anchovies.

We're meat lovers here at Cook In / Dine Out, and Chef's Best didn't disappoint us in the least. In fact, our first taste of the evening was the Pork Vindaloo from The Pig, a tender piece of pork shoulder served with spicy kasmiri chili and cool cilantro-mint yogurt. Tabarna del Alabardero's Pheasant Over Creamy Rice with Boletus Mushrooms reminded me of a good risotto. Meatcrafters, a local producer of salami, cured meats and sausage, offered six choices of salami ranging from mild to more flavorful choices. My favorite was the One Wild Fennel salami. Lettuce wraps were also a trend (sensible finger food at an event like this is appreciated), such as Charlie Palmer Steak's Pork Shoulder Lettuce Wrap with Compressed Melon and Pickled Ramps.

One of my very favorite meaty treats of the evening was Asia Nine's Bourbon Ginger Chicken Wing with Summer Chicken Dumpling. The combination of bourbon and ginger was fantastic, something I would definitely like to experiment with. I also swooned over Meridian Pint's Chipotle Barbecue Beef Brisket Slider with Coleslaw.


Vegetables and Other Non-Meat Items

I'm really into chickpeas, but I don't think I'd ever had fresh ones before coming across Firefly's Three Bean Salad. The fresh chickpeas were green, rather than the usual light brown color you get from the canned ones. Our friend Wendy steered us over to the Pimento Cheese, a Southern favorite, at the Farmers Fishers Bakers station, which I had spread on a chewy baguette slice. Newly opened Dino's Grotto, the reincarnation of Dino's in Cleveland, served a delicious cold Potato and Garlic Soup. For apple and cheese fans, Argia's Bruschetta with Gorgonzola, Ricotta, Apple and Walnut was a nice fresh taste.

Ice Cream was the dessert of choice at the event. My favorite was Shake Shack's Lemon Meringue ice cream, which tasted so much like the pie that you wondered how they made it work. Westend Bistro has the most unusual ice cream: a mini cone of Coconut Lemongrass Ice Cream topped with Snapper Ceviche. For wow factor, the Washington Hilton scored with its Bacon Ice Cream served over Bacon Pralines.


Lastly, I have to single out a particular highlight of the evening, which was the food from the Washington Hilton hotel caterers, who served a selection of dishes celebrating all things porky. In addition to the aforementioned bacon desserts, their table featured Pulled Pork Griddled Cheese with Cole Slaw, House-Made Mustard, Grilled Pork Belly and House-Baked Beans--all of which was quite tasty. No rubber chickens from this crew.

Food & Friends really lived up to its name with this event. I had a great time with my friends and the food was spectacular. If you've never heard of Food & Friends, it's a wonderful charity that prepares and delivers meals and groceries to people in the D.C. metropolitan area living with HIV/AIDS, cancer and other serious illnesses. This is an important service for the community helping to bring hope and sustenance to those for whom the everyday task of acquiring and preparing food can be a struggle. I felt fortunate to be in good health to be able to enjoy such a remarkable event as Chef's Best. I left the event happy, sated and yes, inspired.

Special thanks to Jason Shriner of The Aubergine Chef who let me use many of his photos which appear above--generally the better ones, since he brought a nice camera while I was using my iPhone. Jason also wrote about our evening at Chef's Best on his site.
Posted by Cook In / Dine Out at 6:16 AM

Email ThisBlogThis!Share to TwitterShare to FacebookShare to Pinterest
Labels: Events