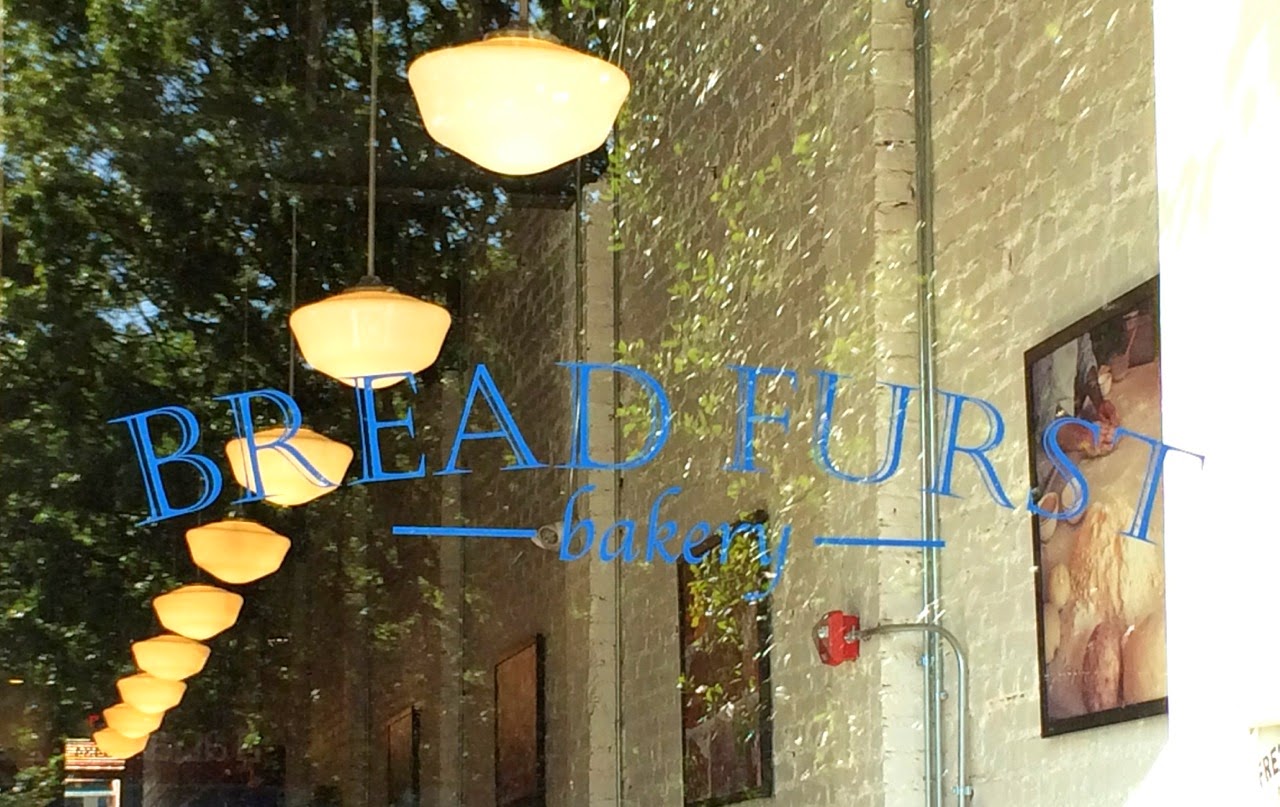 I always thought a bakery would be a nice thing to have in the neighborhood. A real bakery. Not a window in the back of the grocery store. Not a chain coffeehouse that also peddles a few baked goods. An honest-to-goodness local bakery staffed by skilled people making amazing bread and baked sweet treats.

I got my wish when Bread First opened 2 weeks ago. And wow did I get lucky.

D.C. isn't exactly known for its artisanal bakeries. Despite our confusing street grid, this isn't Paris. With so much of the city's hot new restaurants going into places like 14th Street and Shaw, one wouldn't expect a new top-rate bakery to stake its claim 2 blocks north of the Van Ness Metro station on Connecticut Avenue, a commercial stretch best known for the great Calvert-Woodley liquor store, a car wash and UDC. The area suffers from an unfortunate lack of good places to eat (Glover Park, a little ways south of Van Ness, has surprisingly better food choices, despite its lack of Metro service).

Bread Furst is the latest business from baker/entrepreneur Mark Furstenberg, who opened his first Marvelous Market in 1990 (which he later sold) and the BreadLine in 1997. Furstenberg is no stranger to this corner of Upper Northwest D.C.: his original Marvelous Market location was 6 blocks further north on Connecticut Avenue in the same block as Politics and Prose, the notable bookstore formerly co-owned by his late sister Carla Cohen.


When it comes to bread, Furstenberg clearly knows what he's doing. A 2008 profile of Furstenberg by David Hagedorn in the Washington Post describes the baker's training with Los Angeles chef and baker Nancy Silverton and a series of Parisian bakeries around the time he opened Marvelous Market.

So it's no surprise then that the bread at Bread Furst is the star attraction. Every loaf I've sampled has been incredibly good. If Bread Furst could replicate its quality on a large scale, the gluten-free fad would dry up in an instant. It's that good.

The Palladin bread has a good crumb and a crispy crust. I ate a few slices as a side to shrimp scampi and enjoyed my first piece spread with butter, which was really good. This is would be a great dinner accompaniment.

The Levain bread is darker and has more structure. It's quite chewy. The crust though is amazing. Rich, dark flavors, almost like coffee. I don't recall every being as excited by bread crust before. Whole Foods carries a levain bread we get sometimes; Bread Furst's is way better.


When the young man behind the counter hands me my loaf of whole grain bread, the first thing I notice is it's heft. Did they bake a firearm into this thing? So yes, it's fairly dense, although when sliced the interior is still nicely structured. Like the levain, it also has a substantial crust, this time studded with sunflower seeds.

Then there's the baguette. If you weren't impressed by the other breads, you couldn't deny that this is special. They bake them every 4 hours, and they're so popular that they sell out quickly. Due to lucky timing, on a recent visit I showed up 5 minutes after the latest batch had come from the oven. So I now only got one, it was still quite warm. Eating a slice of that soft warm baguette with its crackle crust topped with a thin spread of butter made me convinced I'd never eat another baguette as good as this one again.

Smartly, Bread Furst leaves its plate of cookies by the cash register, making it hard to resist adding a few to your bread order. Chocolate chip, triple chocolate and oatmeal are among the varieties available, all of which exhibit the appropriate buttery goodness. The triple chocolate are particularly good.

We've also ventured into Bread Furst for breakfast during its first Sunday morning service, on Mother's Day no less. We arrived about 8 minutes before they opened, which was a smart move, as we ended up being third in a line that stretched through the bakery and outside all throughout our breakfast.


My favorite breakfast item was the glazed donut, which was chewy and yeasty the way a good donut should be with a thin layer of icing that cracks as you eat it. The vegetable quiche was also good and had a smooth texture and a flaky crust. Our one warm item, french toast with real maple syrup, had a soft middle with crisp edges and subtle spiciness of cinnamon and clove. We could resist adding a couple of cinnamon-sugar donut holes to our repast as a final touch. I look forward to eventually making it in for lunch to try one their sandwiches (on the menu right now: a harissa chicken sandwich on palladin roll with chickpea spread and watercress that sounds like it would be right up my alley).


The sweet treats, although all very good, don't excite me as much as the bread. I'm pretty good at making my own sweets, but apart from pizza crust and a few run-ins with a bread-maker, I have no experience making bread. So I don't think I could turn out a good loaf, let alone a great loaf, let alone the most stellar loaf I've ever tasted. Thankfully, now that I have an amazing neighborhood bakery, I don't have to learn.