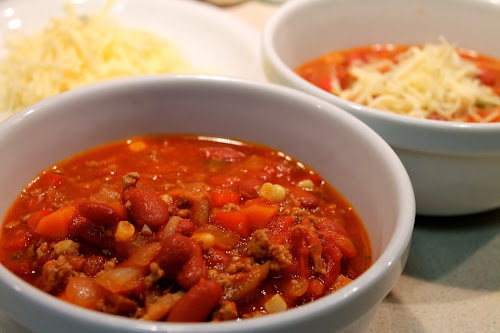 What makes a chili? That's a question I'll be exploring this week, as I offer recipes for a variety of chilis, ranging from a bean-free traditional Texas chili, a popular midwestern variation and a mashup I created with Thai influences.

Generally, "chili" is used as shorthand for "chili con carne," a dish that originated in the 19th century frontier southwest, particularly Texas (for more chili history see Wikipedia or this article by Linda Stradley for What's Cooking in America). It consists primarily of stewed beef, chili peppers, onion and tomato. Whether it also includes beans is a major point of contention: some insist that authentic Texas chili con carne does not include beans. But a Google search of "chili con carne" recipes reveals plenty of results that do. So clearly this isn't a consensus issue.


Because the chili recipe below strays pretty far from what would be considered authentic Texas chili, I'm calling it a "chili-stew." Although I often make chili with canned tomatoes, I wanted to take advantage of the ripe tomatoes available right now, which I roasted for this dish, an adaptation of the Turkey-Black Bean Chili I've written about previously. This version has even more vegetables, kidney beans instead of black and more of a barbecue sauce flavor profile. This is the one dish Chris asks for more than any other, and I agree it's quite satisfying any time of year.

1. To roast the tomatoes, preheat the oven to 350 F. Take 4 ripe tomatoes, quarter them, toss with 1 tbsp. of olive oil and a sprinkle of salt and roast for 2 1/2 hours, stirring every 30 minutes until shriveled, browned in places and most of the liquid has evaporated. Allow to cool and store in the fridge until ready to use.

3. Add back to the pot the cooked bacon and turkey along with the tomato paste, corn, beans, chili powder, smoked paprika, dried oregano, ground cumin, smoke flavor, brown sugar, vinegar, Worcestershire sauce and water. Increase heat to bring to boil. Cover point, reduce heat and simmer over low meat (mixture should bubble gently) for 20 to 30 minutes, stirring occasionally. Remove from heat. Taste chili and adjust seasoning. Serve in bowls topped with shredded cheese.
Posted by Cook In / Dine Out at 12:00 AM