This Ain't Your Baby's Applesauce 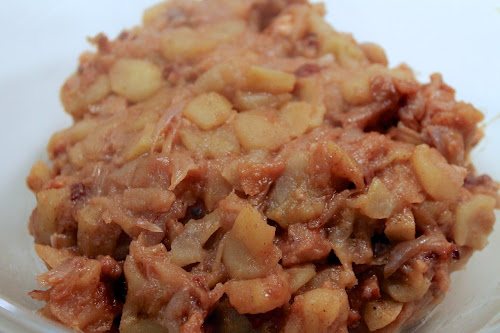 Apples are usually associated with dessert: apple pie, apple cake, apple brown betty, etc. Savory apple recipes are few and far between. This time of year though, when apples come into their peak season, this most classic fruit deserves some space on your menu prior to the final course. Applesauce is one such avenue, a deliciously tart, spicy and sweet side that is particularly wonderful with pork but can serve alongside other mains as well.

It's also really easy to make. Of the many things you both buy and make yourself, the one I believe benefits most from the home cook's touch is applesauce. The kind in a jar just isn't very interesting. It has no texture and only a very basic flavor. It's hardly different from the baby-food version.


No one would confuse this applesauce for baby-food. With added flavors and textures, this recipe turns the classic apple side into something that can really hold its own against a perfectly pan-seared pork chop.

I added bacon for smoky and crisp-chewy texture, walnuts for crunch, caramelized onion for depth and maple syrup for a more interesting sweetness than the usual white sugar. There's a bit of pepper and thyme as well, plus some lemon juice at the finish for a slight sourness. The resulting sauce is thick and chunky, sweet but not overly so. It's familiar as applesauce, but surprisingly different as well.

1. Add bacon to a medium saucepan over medium heat. Cook until browned and crisp; remove with a slotted spoon and set aside on a paper-towel-lined plate. Remove excess bacon fat to leave about a tablespoon. Reduce heat below medium; add onion and a pinch of salt. Cook, stirring occasionally until the onion is very soft and light brown (this is when it's caramelized), about 30 minutes. Season to taste with freshly ground black pepper.

2. Add apples, cinnamon, water, thyme, walnuts and maple syrup to saucepan. Increase heat to medium-high, cover and bring to a boil. When mixture boils, reduce heat to medium and simmer vigorously for about 15 to 20 minutes, stirring occasionally, until the apples are softened. Smash a few of the apple pieces with a wooden spoon as you stir the mixture, which will be very thick. Remove from heat and stir in the cooked bacon and lemon juice. Allow to cool a bit before serving (but I recommend serving it warm and not cold, but just not piping hot).
Posted by Cook In / Dine Out at 12:00 AM