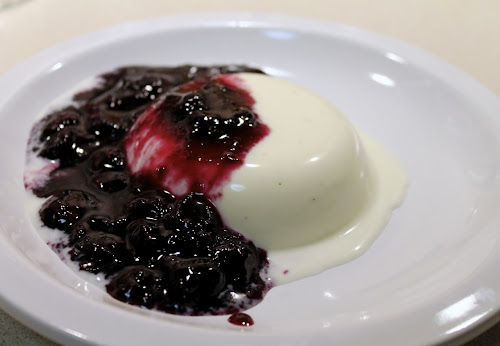 I had disappointing panna cotta in a restaurant recently, which got me thinking about whether it's difficult to make it right. I've had it before and it's been great: a simple custard-like dessert that's just set enough to be thick but still very creaming. The panna cotta I had that I didn't like was too rubbery, instead of the light texture I've had before at other restaurants. What's the trick to getting it right?

Of course, for questions on what makes classic recipes turn out well, I turned to one of my favorite cooking resources: America's Test Kitchen. They suggest the right balance of milk and cream is important, as is the amount of gelatin. Too much and you get rubber.

My panna cotta had great texture: just enough structure that it wasn't runny but not at all rubbery. You'll notice in the photo above a bit of cream pooled around the edges. I think I didn't chill it long enough. The panna cotta we ate the second day (and thus chilled overnight) was a little firmer.

1. Pour milk into a medium saucepan and sprinkle with the gelatin. Let sit for 10 minutes.

2. Prepare an ice bath in a large bowl with about 32 ice cubes and 4 cups of cold water.

3. Add cream to a liquid measuring cup. Using a paring knife, scrape the seeds from the vanilla bean into the cream, then add the bean pod to the cream as well.

4. Heat milk and gelatin mixture over medium-high heat, stirring constantly until the gelatin is dissolved and the mixture reaches a temperature of 135 F. Remove from heat, add sugar and salt and stir until dissolved.

5. While constantly stirring milk mixture, slowly pour the cream and vanilla into the saucepan, then pour the mixture into a medium bowl and set it over the ice bath. Stir frequently until thickened and mixture registers 50 F with an instant-read thermometer, about 10 minutes.

6. Strain mixture into a large liquid measuring cup and then portion out equally among four ramekins. Place ramekins on a baking sheet and cover sheet and ramekins with plastic wrap (make sure plastic does not touch the top of the custards). Refrigerate until just set, at least 4 hours. The mixture should wobbly gently.

7. After being chilled, unmold panna cotta from the ramekins by dipping each ramekin in a small bowl of boiling water for 3 seconds, running a moistened finger around the edge of the custard to gently pull it away from the side of the ramekin, then inverting the custard over your hand and gently easing it onto a plate (alternatively, in step 6, pour into wine glasses instead of ramekins and serve in the glasses without unmolding). 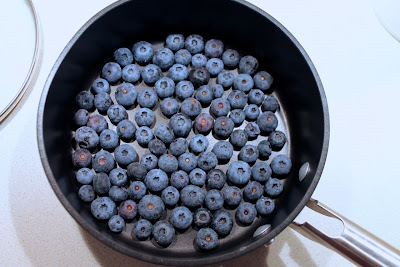 Combine blueberries, sugar and water in a medium saucepan over medium-heat. After the mixture boils, cook for 10 minutes, stirring occasionally until the mixture has thickened. Allow to cool. Transfer to a glass container and store in the refrigerator.
Posted by Cook In / Dine Out at 12:00 AM