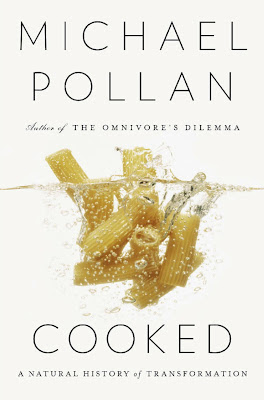 Michael Pollan’s new book Cooked is a little hard to explain. At its core, the book tells his first-person experiences learning a variety of cooking techniques. And not “cooking” in the way too many of us experience it today by reheating a frozen meal in the microwave, or even the “scratch” cooking some of us do with partially prepared ingredients like canned vegetables and dry pasta. No, Pollan’s cooking is fundamental: barbecuing a whole hog or making bread with nothing more than flour, water, salt and wild yeast, for example. Some of these processes, particularly his fermentation efforts, take days, even weeks to complete.

So, no, this is not exactly the call for the average working person to get back in the kitchen and cook. But it is a fascinating re-engagement with what cooking is and has been, exploring the subject from almost every angle: history, science, sociology and philosophy, to name a few.

The book is divided into four parts, corresponding to the four traditional elements: fire is, obviously, cooking with fire and smoke; water is braising; air is bread-making, a process of leavening and baking; and earth represents fermentation and other microbial aging processes. In each section, Pollan works with different food experts to learn the craft. Some memorable partners include a celebrated Bay Area baker, an inventive Spanish chef and a cheese-making nun.

Because it’s set in a typical kitchen, the water/braising section is the book’s most accessible. Pollan has also acknowledged it to be his favorite. Here, he works with chef Samin Nosrat, a Chez Panisse alum, to prepare a number of dishes that rely on braising, that is slow cooking with water usually involving sautéed aromatic vegetables (love his discussion of mirepoix and soffrito) and meat. It’s the kind of cooking that makes your house smell really good and inspires family and friends to congregate in the kitchen. Pollan’s description of spending a weekend afternoon braising an Italian meat sauce while his son sits nearby doing his homework is particularly sweet.

Perhaps the most foreign section is that on earth/fermentation which, because it delves into the role of microbes, is the most science-heavy portion of the book. Here, Pollan examines the making of fermented vegetable dishes like sauerkraut and kimchi, the aging of raw-milk cheeses and the brewing of homemade beer, a project his aforementioned son takes a particular interest in. Although the philosophical portions of the book tend to be my least favorite, I did enjoy his discussion on the subject of “disgust,” which he employs when describing how various cultures celebrate some fermented foods but are repulsed by others. Many Asians, for example, prize fermented soy products like natto (which Pollan describes as “redolent of garbage”), but are repulsed by cheese.

If you’ve read Michael Moss’s Salt Sugar Fat, Cooked is an excellent follow-up. This passage almost reads like a plug for Moss’s book:

Corporations cook very differently from how people do (which is why we usually call what they do “food processing” instead of cooking). They tend to use much more sugar, fat, and salt than people cooking for people do; they also deploy novel chemical ingredients seldom found in pantries in order to make their food last longer and look fresher than it really is. So it will come as no surprise that the decline in home cooking closely tracks the rise in obesity and all the chronic diseases linked to diet.


While Moss’s book tells you all that’s wrong with modern convenience cooking, Pollan’s tells you what you’ve been missing—how delicious and nourishing real food is for the body, mind and community.  This link is not lost on these writers: the two teamed up for a recent New York Times piece.

What I think the current food discourse needs next is to fill the void between the extremes of corporate convenience cooking and painstaking scratch cooking. This is the question that needs to be answered: how can a working person make nourishing, affordable meals with real, sustainable ingredients without doing undue harm to the planet? I know that’s not an easy question, and answering it will require re-thinking some of our assumptions, including how much time and money we’re willing to spend on food (and the answer isn’t “less”). But as we continue to chip away at it, books like Cooked (and Salt Sugar Fat and The American Way of Eating before it) are important steps toward a workable answer.
Posted by Cook In / Dine Out at 12:00 AM