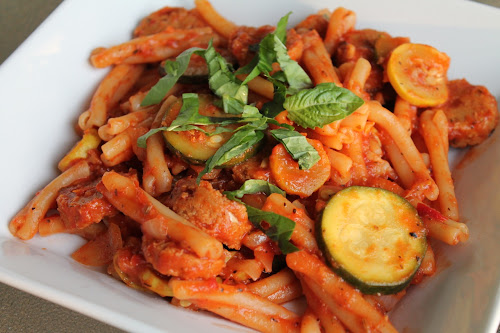 There's an interesting twist to this pasta dish, but I'll save that reveal for later.

Sausage, zucchini and tomatoes are a great combination for pasta sauce. Since tomatoes aren't in season yet, I used canned Cento crushed tomatoes, which is quite tasty and means this dish comes together quickly in about 30 minutes. 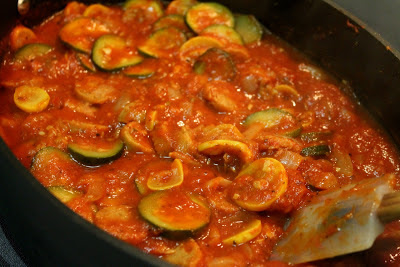 So what's the big twist? This dish is vegan (*unless you put cheese in it). I used Field Roast Italian sausages, which are made from grain, red wine, a mix of vegetables (eggplant, onion, red pepper) and spices. I was skeptical about whether I would like them, as I'm suspicious of foods that masquerade as other foods, but they were actually pretty tasty. Of course, feel free to substitute cooked meat sausage in this dish, but if you've never tried vegan "meat," this is a good opportunity to give it a chance.

1 lb. short pasta, such as casarecce

1. Cook pasta in salted boiling water according to package directions for al dente. Drain and set aside.

2. Heat olive oil over medium heat in a large skillet. Add onion and garlic, season with salt and sauté until softened, about 6-8 minutes. Add zucchini and sauté another 8-10 minutes until softened and the onions are starting to brown. Add thyme, oregano, nutmeg, red pepper flakes, pepper, and sausage, and sauté just a few minutes until the spices are fragrant. Stir in the wine, then add the tomatoes and water. Increase heat and cook until the mixture bubbles then reduce heat, cover and simmer for about 10-15 minutes. Stir in and half the fresh basil, reserving the rest to top the pasta dishes. Add the pasta to the pan and stir with the sauce until evenly combined. Serve topped with fresh basil and, if desired, grated parmesan cheese.

*The addition of parmesan cheese, while tasty, would make this dish vegetarian rather than vegan.
Posted by Cook In / Dine Out at 12:00 AM