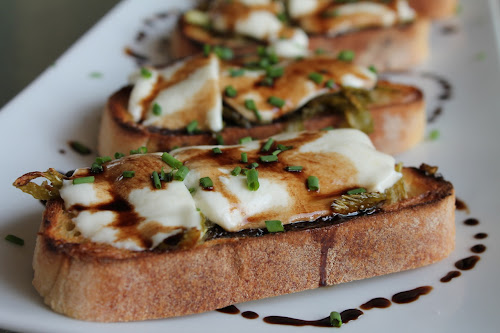 A picture may be worth a thousand words, but is it worth a taste?

These Caramelized Celery Crostini are inspired by candied celery crostini at Osteria Elisir, which I didn't have when we ate there, but that D.C. restaurant blogger Lori Gardner wrote about on Been There, Eaten That after her recent visit. The picture and her description of the dish with its combination of sharp and sweet flavors caught my attention and inspired me to whip up something similar.

The crostini Gardner had at Osteria Elisir was composed of creamy gorgonzola spread, candied celery, and aged balsamic vinegar, which sounds like a fabulous combination. Most of all, I was curious how one would go about making candied celery. 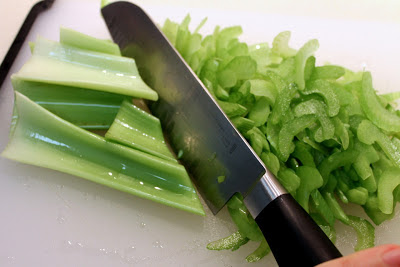 On the web I found dessert recipes that involved roasting celery in the oven with pears. That wasn't really what I was looking for. It dawned on me that it might be possible to instead caramelize celery similar to what you can achieve with onions. Celery is a natural partner to onions: together they form the basis of many dishes--specifically in the form of mirepoux or soffrito.


Of course, celery isn't as sweet as an onion, so I added a little sugar to help the caramelization along. Celery also doesn't soften as easily as onions, so if patience is a problem, this isn't the dish for you. I cooked the celery on just-below-medium for about 45 minutes before I thought it was ready. It stayed vibrant green for quite a long time, but eventually it started turning that more olive green color of cooked celery and even a little brown around the edges. I was careful to moderate the heat: I didn't want the celery browned like in a sauté.


This dish was delicious. The celery had a nice sweetness that worked well with the mozzarella and the tang of the reduced balsamic. A couple weeks later I tried a second variation, described below, with homemade ricotta and whole wheat sourdough, which also worked well. 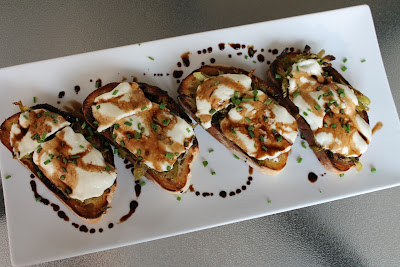 1. Heat a large frying pan over medium-low heat (almost medium). Add butter. When melted, add celery, salt and sugar. Cook, stirring occasionally, until the celery is soft, olive green and slightly browned around the edges, about 40-45 minutes. Moderate heat to make sure celery does not cook too fast. Remove celery from pan.

2. Heat a small frying pan over medium heat. Add balsamic vinegar and cook until reduced by about half. Set pan aside to cool slightly.

3. Preheat oven broiler with rack about 5 inches from broiler. Place slices of bread on a baking sheet and brush with olive oil. Place under the broiler and cook until lightly toasted, about a minute or so (watch carefully or it will burn).

4. Spread 1/4 of the cooked celery on top of each piece of toast, then top with a couple slices of mozzarella. Place under broiler and broil for about a minute until the cheese has melted a bit. Remove from oven and transfer toasts to a serving platter. Drizzle with balsamic vinegar and sprinkle with chives. 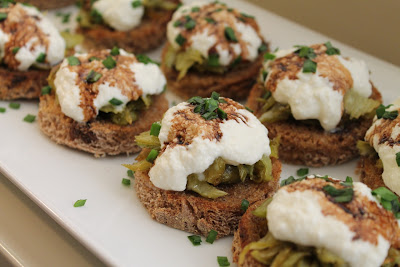 Make as above, except substitute 10 rounds cut from whole-wheat sourdough bread (I cut the rounds with a biscuit cutter from slices of bread), substitute homemade creamy ricotta for the mozzarella and skip the step to broil the cheese. For this version, I also didn't reduce the balsamic vinegar and used chopped garlic chives for the herb topping. Rather than four larger crostini, this makes 10 smaller ones.
Posted by Cook In / Dine Out at 12:01 AM