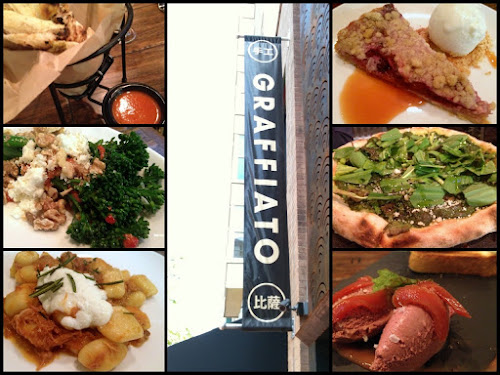 On the occasion of the imminent opening of celebrated D.C. chef Mike Isabella's third restaurant (the Greek-themed Kapnos), I decided it was time to revisit his first outing, nearly 2-year-old Graffiato, to see how it's holding up. I was delighted to find that Graffiato is as vibrant and tasty as ever.

Prior to his Top Chef fame, Isabella worked as executive chef at Zaytinya, one of several small-plate-concept restaurants from D.C.'s top toque, José Andrés. Then, after placing second in the Top Chef all-stars, Isabella opened his first restaurant, Graffiato, which embodied a similar serving style as Zaytinya but adapted to Italian-American cuisine with a focus on seasonal, fresh ingredients. Although Isabella became famous on television for Gail Simmons-swoon-worthy pepperoni sauce, in D.C. he was quikcly better known for Graffiato's sweet corn agnolotti, which became the restaurant's signature pasta dish. Isabella's presence loomed large in the restaurant: if he wasn't expediting or working the pizza oven, he was providing big-smile photo-ops to appreciative customers.

I visited Graffiato several times when it first opened and loved it. Most everything I ate there was incredibly good. I was a big fan of the pizza and the pasta and, of course, the pepperoni sauce, which was served under chicken thighs. It was at Graffiato, eating the deliciously fresh Caesar salad, that I started to embrace anchovies. The simple two-story space was great for lunch with coworkers and dinner with my husband.

Fast-forward a year and Isabella opens his second D.C. restaurant: Bandolero. Unlike Graffiato, this wasn't a resounding success. Sure, its Georgetown location and Isabella's reputation guaranteed a crowd, but the irreverent Mexican cooking received mixed reviews (including from me). Knowing he had plans to expand his restaurant empire further, Bandolero's unevenness begged the question whether this was prudent.

If the current state of Graffiato is any indicator, D.C. should be more than ready to welcome another Isabella establishment. He may not be a constant presence in the Graffiato kitchen these days (helmed now by Chef de Cuisine George Pagonis), but he seems to have left it in good hands. Upon opening my menu, I found it very difficult to choose what to order, so many of the dishes sounded like they'd be good.


We began our night with the pepperoni sauce, still available with chicken thighs but now also served as a dipping sauce for nicely charred, soft-textured flatbread. Repurposing the sauce in this manner is like starting the evening with a deconstructed pepperoni pizza. It's an inspired move and a great way to experience this famous condiment in a new way.

From there, we moved into vegetable territory, where the choice was the hardest. Although I was intrigued by the charred asparagus and smoked beets, we opted for the broccolini, which was perfectly cooked with a hint of lemon and served with red pepper relish, walnuts and feta.

With Gail Simmons still on my mind, we moved next to chicken liver mousse, a dish I'd never had but wanted to try (Simmons fawned over this dish as prepared by Kristen Kish on the most recent season of Top Chef). Chris and I had divergent views about it. I liked its silky texture and earthy, meaty taste, but Chris didn't care for it. We did, however, agree that the gnocchi were pretty much perfect: light and pillowy, served with a delicious pork ragu with just a hint of red pepper plus rosemary and whipped ricotta.


Although the menu changes seasonally, Graffiato has a small super-seasonal menu, from which we ordered the Luigi pizza, a celebration of seasonal ramps topped with both pesto and chopped greens from the wild leek with a cultish following. I loved the contrast of the pesto with the greens and the crust was as good I remembered with just the right combination of chewy, crispy and char. Chris had initially wanted the steak, but after our server recommended this, we got it instead. I was glad that Chris later said it was his favorite thing we'd had.

We finished our evening with a rhubarb tart served with cardamom gelato, a sweetly satisfying dish with a good hit of eastern spice. It's hard to refuse a good crumble top.

Like the food menu, the drinks menu has so many great choices that it can be hard to choose. We were  intrigued by the aged cocktails, which our explained are mixed and then aged 3 months in oak rum and whiskey barrels to enhance their flavor. We ordered one of each: the Martinez with old tom gin, vermouth and Luxardo, and the Negroni, made with gin, Campari and maraschino liqueur. The rum-barrel-aged Martinez was quite smooth with nice hint of smoke. The Negroni was more assertive but also quite good.

The wine list is similarly inviting. Graffiato still offers all its wine by the glass (but requests a two-glass minimum for its pricier bottles). The list skews heavily towards American wines and features my favorite regions: Napa, Columbia Valley and Willamette Valley. There's also a sprinkling of Italian wines and wines from unusual places (Chris tried a wine from Idaho). Hats off to Taha Ismail, Graffiato's head mixologist since the restaurant opened, and Stephanie Babcock, wine director, for assembling these great libations.

In addition to the food, we enjoyed the excellent service, which was spot on. Our server was friendly, attentive and genuinely excited about the restaurant's new spring menu. Dishes were nicely timed. We didn't feel rushed but the dinner moved along at a welcome pace.

As much as I remember liking Graffiato in 2011, I think I love it even more today. The team is definitely not resting on its laurels, but continuing to tempt and excite, guided as much by its celebrity chef and Italian leanings as it is by the seasonal ingredients that its menu effectively showcases. Consider me primed and ready for Kapnos.