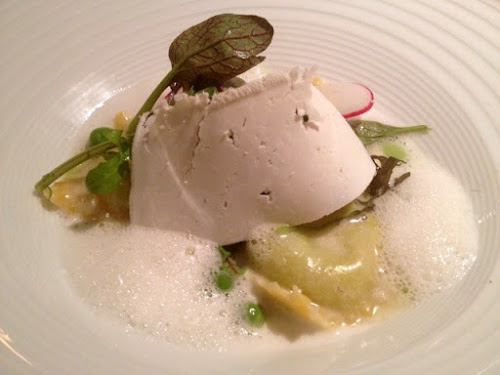 When I first visited Range and wrote about it in February, I fell pretty hard for the restaurant. I absolutely loved it. Both the food and service were stellar. And I wasn't alone. The restaurant received many accolades, including from Washington Post restaurant critic Tom Sietsema, who awarded the restaurant a respectable 3 stars.

More recently, however, there have been grumblings about the restaurant's service. Having received so many complaints during his weekly online chat, Sietsema recently suggested he shouldn't have been so generous in awarding 3 stars.

Still reveling in fond memories of the bacon marmalade, roasted Brussels sprouts and lemon custard, I decided to pay Range another visit with two questions in mind: 1) is the food is still as amazing as it was during my first visit? and 2) are the grumblings about the service true?

The brief answers are: 1) mostly yes, and 2) nothing bad as far I can tell. 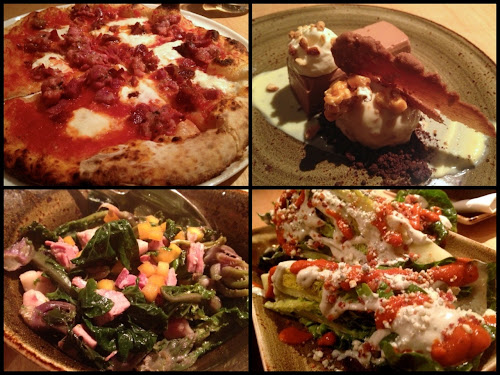 I'll tackle the food first. As I previously discussed, Range has a very broad menu. During our first visit, we treated the restaurant as a sort of Southern steakhouse. This time, we decided to explore Range's Italian side. We weren't disappointed by our pasta: the chewy ravioli filled with spring pea puree and served with radish, ricotta salata and additional spring peas on the side was delicious. We also really liked the kale sprouts, which have a flavor similar to artichokes and are served with ham and pickled apple, a creative and tasty combination.

Range's take on the wedge salad, little gem lettuce with bacon and blue cheese, was a refreshing way to begin the meal. We were also happy with the milk chocolate dessert that ended our meal. The only dish that didn't quite stand up to the others was the pizza with "salumeria" (sausage, bacon and ham) and buratta. I thought the sausage was delicious, but the toppings were cut in pieces too large to be supported by the somewhat limp crust.

If I was going to complain about anything though, it would be that the allotment of bacon marmalade that accompanies the warm cornbread has sadly been reduced. How can I pig out on this decadent condiment if we're only given a spoonful? I was tempted to invade the kitchen in search of another serving or at least ask for more (it's really quite amazing).

Now, about that service.

I scanned through Yelp and Tom Sietsema's recent online chats to see what people are complaining about. Their concerns included long waits to be seated, served drinks or brought food, as well as lack of attention from servers and managers. Surely, these can be very frustrating issues.

However, on a recent Saturday night, I did not encounter any of these sorts of issues. In fact, I found the service to be prompt and attentive. Perhaps, having had these issues brought to their attention, Range managers have implemented steps to address customers' concerns? I hope that's the case and I wasn't just lucky this last visit.

We were seated promptly upon arrival (and appreciated the sympathy for our being soaking wet as we got caught in a sudden downpour walking the last block to the restaurant). The cocktails we ordered came out quickly, as did all of the food we ordered, although not too quickly as to make us feel rushed. Cleared plates were removed promptly, but not until we were done with them, and our plates were never taken until both of us were finished with that portion of the meal.

Our server was helpful and attentive, and we appreciated that a manager was around to check on us. When we asked for clean plates because the last thing we'd eaten was rather saucy, they were replaced immediately. The service wasn't just satisfactory, it was still quite good. Sure, they didn't bring the candy cart around this time, but frankly I can do without the temptation.

If you're waffling about visiting Range because you've heard service complaints, I would encourage you to give the restaurant a chance. In addition to the food, which most everyone agrees is very good, the service I've experienced there has been very good as well. Sure, any great restaurant can have an off night, but, from my experience there is no pervasive issue at Range.