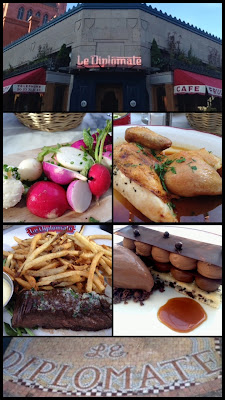 Good buzz is the stuff of new restaurant dreams, and Le Diplomate has it in abundance.

The large Logan Circle bistro has been the talk of the town since opening a couple months ago. On a recent early Sunday evening the place was already packed, making me glad we had reservations.

French cuisine used to be the pinnacle of exciting restaurant food, but it's lost stature as Medterranean, pan-Asian and now farm-to-table have moved in to dominate our collective palates. So that the hottest new place on 14th Street--itself a pean of hot new eateries--is serving traditional French bistro fare instead of new wave Thai or super-seasonal modernism represents a risk that's clearly paying off.

The restaurant, located on a prime 14th Street corner, is a beautiful and generously apportioned space, with several dining rooms and a large patio.


All visits here begin with Le Diplomate's extraordinary bread basket, featuring a perfect baguette with light, chewy crumb and a crispy crust. Also delicious are the cranberry-walnut bread and warm peasant bread with a slightly sour taste and thick crust. In an age where restaurants increasingly charge for things like bread or chips-and-salsa, it's amazing that such a standout item is provided gratis. It's a generous offering and a great way to begin the meal.

From there we moved on to fresh vegetables. Radish crudité is prepared simply: a variety of radishes sliced in half served with large-flaked sea salt, toasted brioche and chive butter. if you like butter, this place is for you, as just about everything is either cooked, spread or garnished with it. Salade verte features fresh lettuce dressed simply with a bright red wine vinaigrette, green beans and radish slices. The radishes were perhaps a little too plain, but the salad was satisfying.

Our entrees were mostly quite good. I loved my half roast chicken, which was quite flavorful with herbs stuffed under the nicely crisped skin and a wonderful rosemary-flavored jus de poulet ("sauce" for you non-French speakers). I also enjoyed the potato puree, although I suspect it was more butter than potato.

Steak frites features a pan-roasted hanger steak with crispy browned frites served with a side of mayonnaise. The steak was nicely seasoned but, although we ordered it medium-rare, it came out fairly tough, which is not uncommon for hanger steak, but I was hoping for something more tender. (Frankly, I'm ready for restaurants' hanger steak obsession to end. Can't we go back to ribeye?)

Our dessert was absolutely delightful: a dark chocolate napoleon constructed with a bottom layer of almond dacquoise, planks of dark chocolate and columns of dark chocolate mousse with a delicious side of chocolate ice cream and a little pool of caramel. I'm definitely looking forward to coming back and seeing what other artful treats pastry chef Naomi Gallego can create.


I found the wine list a little perplexing. I know it's expected that French restaurants' menus are written in French, but if the wine list's subheadings would've been in English I probably wouldn't have accidentally ordered a half-bottle when I wanted a full-size one (thankfully I noticed the mistake before our server opened it).

Speaking of which, our server was delightful, friendly and attentive. Sometimes the food seemed a bit slow to arrive, but hey, isn't that kind of French? And, as I mentioned, the place was hopping.

What you won't find at Le Diplomate: a celebrity chef, a trendy menu or molecular gastronomy. What you will find: delicious classics prepared well and served in an energetic setting that's a great space for spending a couple hours.