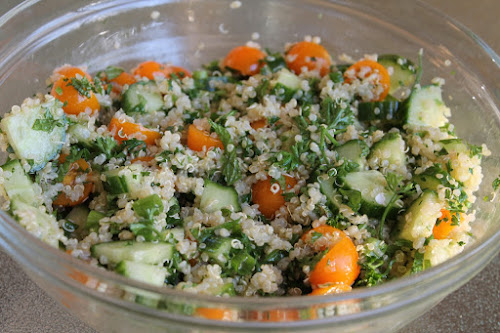 Tabbouleh is a grain and vegetable salad that makes an excellent side dish in hot weather, in addition to being a popular mezze dish. Although it's usually made with bulgur wheat, this recipe from Bon Appétit substitutes quinoa, which works just as well. As suggested by a recent Washington Post article, I like to soak my quinoa before cooking it.

1. Bring quinoa and water to boil to boil. Cover, reduce heat an simmer until tender, about 10 minutes. Remove from heat and let stand, covered, for about 5 minutes. Transfer to a large bowl.

2. Whisk together lemon juice, garlic, olive oil, salt and pepper. Add cucumber, tomatoes, parsley, mint and scallion to the bowl with the quinoa. Add dressing and toss to combine. Chill until ready to eat, at least 15-20 minutes.
Posted by Cook In / Dine Out at 12:00 AM