Sweet and Sticky Baby Back Ribs 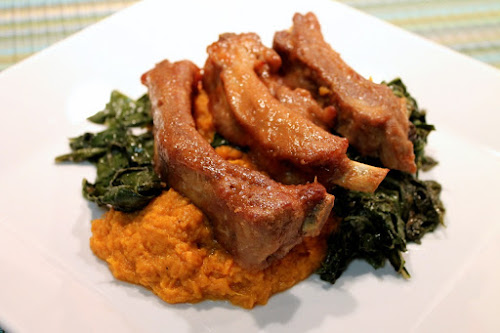 Grilled ribs are delicious thing. When, like me, you don't have access to a grill, you can still enjoy ribs prepared in the kitchen.

Fellow D.C. food blogger Cathy Barrow (who writes Mrs. Wheelbarrow's Kitchen) adapted these ribs for the Washington Post, billing them as "The Only Ribs You Need to Know."


I was skeptical about this dish because the first step in cooking the ribs is boiling them, and boiling is known to make meat tough. But, possibly because of the fat content of pork ribs, it wasn't a problem in this dish. Additionally, the ribs aren't fully cooked in the boiling water, as they are finished in the oven. The resulting meat was deliciously tender and not at all tough. 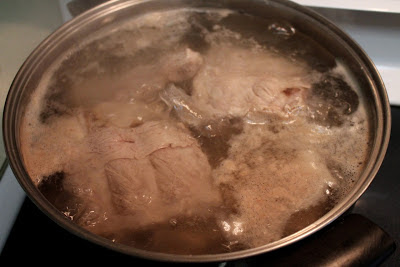 I asked the Whole Foods butcher for about 7 pounds and ended up with two big pieces that I had to cut down to fit in my pot. Cut into segments of four ribs, they actually all fit into my pot, an old 8-quart Revere Ware dutch oven. 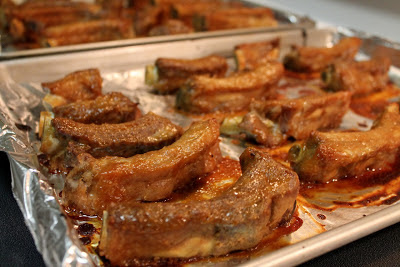 I served the ribs with a sweet potato puree spiced similarly to the Moroccan(ish) Spring Stew and simply cooked Swiss chard.

Sweet and Sticky Baby Back Ribs
Adapted from The Only Ribs You Need to Know, tested by Cathy Barrow for The Washington Post as adapted from a recipe by Lee Manigault and Suzanne Pollak

1. Preheat oven to 400 degrees with two racks evenly spaced in the upper and lower thirds of the oven.

2. Over medium-high heat, bring a large pot of water to a brisk boil. Add the rib racks to the boiling water. Once the water returns to a boil, cook for about 15 minutes. Transfer the racks to a large bowl and allow to rest for 5 to 10 minutes. Using a sharp knife, cut between the bones to separate the racks into individual ribs.

3. Make the sauce: Combine brown sugar, mustard, soy sauce and bourbon in a medium saucepan. Cook over medium heat, stirring constantly until the sugar dissolves. Continue cooking for about 5 minutes to thicken the sauce. Remove sauce from heat and pour over ribs. Toss to coat ribs evenly.

4. Line two baking sheets with aluminum foil or parchment. Spread ribs out over the two baking sheets. Reserve any remaining sauce for basting the ribs. Roast the ribs for about 10 minutes, then rotate the baking sheets top-to-bottom and front-to-back. Baste with sauce. Roast about 10 minutes or so until the ribs are crisped on the edges and well browned. Serve warm with desired sides (they're not bad cold either).
Posted by Cook In / Dine Out at 12:01 AM