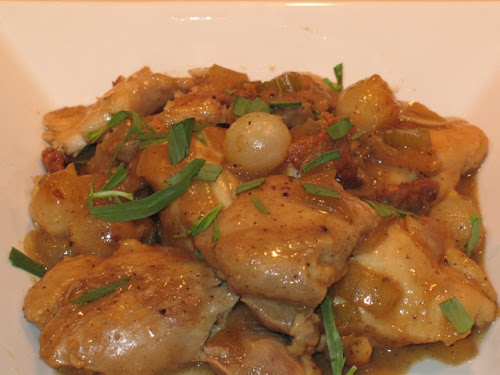 Since I'm an Oregon boy, I couldn't help but feel a connection with The New York Times' recent article about Oregon chardonnays. In fact, for awhile, my father co-owned a winery with some of his friends, although I don't think they made much, if any, chardonnay (it was mostly pinot noir and riesling and, since I was about 8 at the time, I wasn't into it). 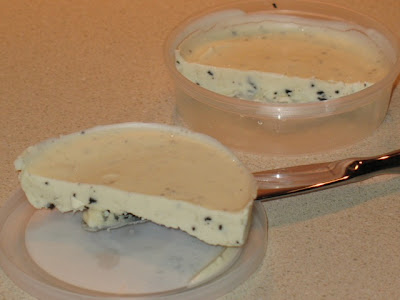 To pair with the wine, the Times also ran a recipe for Coq au Vin Blanc, a variation on the classic French dish made with white wine instead of red. It's a lighter version of the dish, perfect for spring, as it also ditches the cream and bacon that typify the dish. I lightened it up even further by substituting boneless/skinless chicken pieces. Don't worry, there's still a nice dash of truffle butter added at the end for richness.

Perhaps the biggest challenge with this dish was procuring the oyster mushrooms. What exactly are they? I had no idea. At Whole Foods, the bin marked "oyster mushrooms" was filled with creminis. Even the nearby employee mixing up guacamole samples had no idea what they looked like (thankfully another shopper found them for me in an unmarked bin). I also wasn't quite sure how to prep them, but I read that their stems are really tough, so I cut off all the flat pieces and trimmed off and discarded any remaining connecting stems. 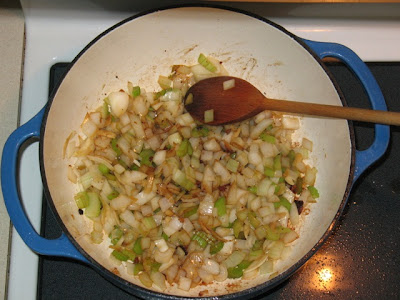 One thing I did differently was to dredge the chicken in flour, this also helped to thicken the resulting sauce when the wine is added, so no additional flour or cream was needed as a thickener. I also added some thyme, in addition to the tarragon the recipe called for. 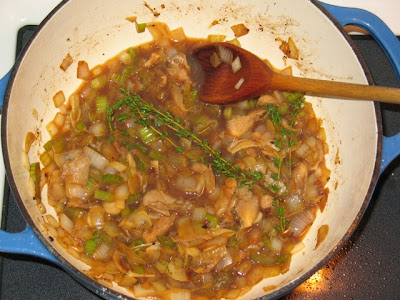 I served this with a crusty baguette for soaking up the sauce and a simple salad of arugula and frisée with a lemon-white wine vinaigrette. 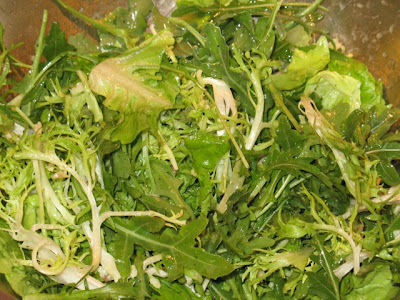 1. Heat olive oil in a 4-quart dutch oven over medium heat. Pat chicken pieces dry and dredge in flour. Add half the chicken to the pot and season with seasoned salt and fresh-ground pepper. After a couple minutes, turn over to brown other side. Remove to a plate when done and brown the remaining chicken pieces (chicken will cook fully later).


2. Add the pearl onions and saute until lightly browned. Remove. Add the chopped onion, celery and garlic, and cook until softened. Stir in the mushrooms. When they wilt, add the wine and thyme, bring to a simmer and season with salt, pepper and lemon juice. Return chicken to pot, cover and cook 25-30 minutes. Check the temperature of the chicken with an instead-read thermometer and remove the chicken when it has cooked (165-170 F).


3. Return the pearl onions and chicken to the pot, add truffle butter and simmer a few minutes to reheat ingredients. Serve chicken pieces with a generous portion of sauce and vegetables topped with chopped tarragon.
Posted by Cook In / Dine Out at 7:30 AM