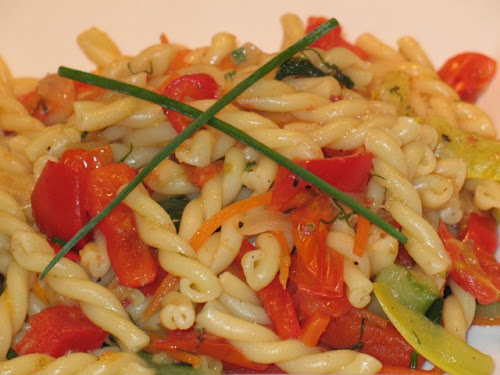 Happy May Day! We're halfway into spring now and I'm kicking off the month with a series of spring-themed pasta recipes. To start, here's the quintessential spring pasta: Pasta Primavera.

I've already discussed how The New Basics Cookbook was my cooking bible as a teenager. Pasta Primavera was another one of my favorite dishes from the book. For someone who had been a picky eater as a child, it's a small miracle that just a few years later I was not only eating but preparing a dish that's loaded with a variety of vegetables.


According to the Cook's Illustrated folks, the dish originated in the '70s at Le Cirque, a Manhattan institution. The idea was to prepare a more healthful pasta dish. Despite its name, even the orignal Primavera wasn't limited to traditionally springtime vegetables. A Primavera true to its name might feature snow peas, fresh peas and asparagus, but broccoli, green beans and zucchini are apparently common too. Really, a Pasta Primavera could include any number of fresh vegetables. 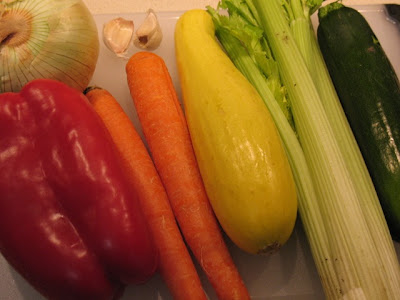 For reasons of nostalgia, I'm partial to the New Basics' combination of red pepper, carrot, zucchini, yellow squash and tomato. Their recipe also calls for snow peas, but since they weren't quite in season when I tested this recipe, I didn't use them. Since I had celery on hand, I did use that, as well as sweet onion and garlic. The white wine and dill combination of the New Basics cookbook works great, so I also wanted to use that.


In prepping the vegetables, I cut them into julienne, i.e. thin strips between 1/4 to 1/2 an inch wide and no longer than about an inch and a half. I used a spoon scoop the seeds out of the summer squash. Since carrots can take longer to cook, I used a julienne peeler to cut them into very fine strips. 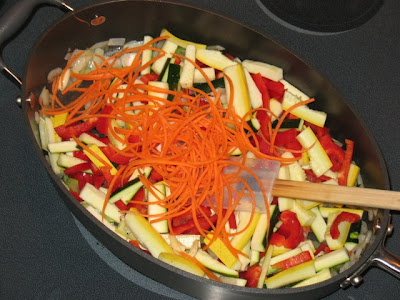 Most recipes I reviewed before making this blanch the vegetables. I decided to skip this and saute them instead. I love the flavor of just-caramelized vegetables, which you wouldn't get with blanching. Sure, I ran the risk of having a less colorful dish, but really, I'd rather have more flavor than color, and in the end, it was still plenty colorful. 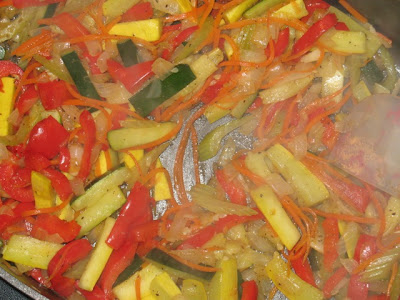 I sautéed the onion, celery and garlic first to give them time to break down a bit, then I added the rest of the vegetables except the tomatoes and turned up the heat. Admittedly, I overcrowded the pan, but they did eventually cook down and once their liquid evaporated began to take on some color. Lastly, I added the tomatoes with the wine and dill. Since the tomatoes were cut small, I knew they would cook quickly. 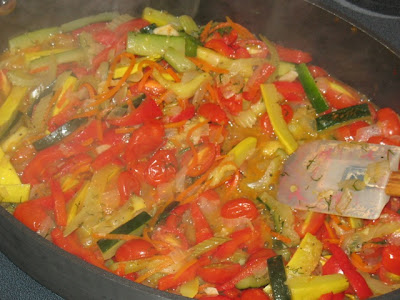 I finished this dish with 2 tablespoons of butter. This may elicit a gasp from the health food crowd, but I had good reason. As this dish is prepared with mostly pieces of vegetable and just a little white wine, there's not much sauce to it. Adding butter at the end provides a unifying element as well as some richness. You could add extra-virgin olive oil instead. Since the oil hasn't been cooked, it will impart fruity olive oil flavor. If you're against adding any additional fat, at least spoon in some more reserved pasta water to keep the dish from being too dry.

1. Bring a large pot of salted water to boil. Cook pasta according to package directions. Reserve 1/4 to 1/2 cup of pasta water, drain pasta and add back 1/4 cup of pasta water. Set aside until sauce is done.
2. Heat oil in a large nonstick skillet over medium heat. Add onion, celery and garlic and saute until softened, about 5 minutes.
3. Turn heat up to medium-high and add yellow and green zucchini, red pepper and carrot. Saute until vegetables have softened, their liquid has evaporated and they start to brown, 10-12 minutes.
4. Add tomatoes, dill and wine. Continue cooking another 5 minutes until tomatoes have softened. Remove from heat.
5. Add chives and butter (or, if not using butter, extra-virgin olive oil or 2 additional reserved pasta water).  Combine with cooked pasta. Serve in bowls with grated parmigiano-reggiano on the table.
Posted by Cook In / Dine Out at 4:30 PM