From the Farmers Market 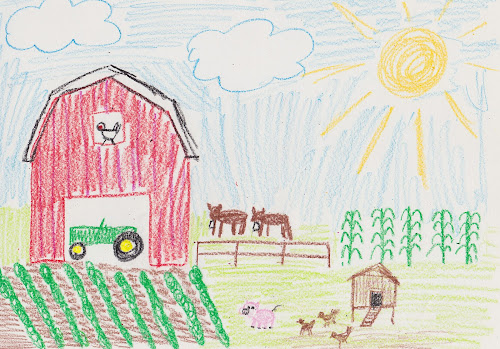 With the weather getting warmer, I'm feeling the pull to visit farmers markets. This week's recipes will feature ingredients available now at markets local to D.C., specifically asparagus, mushrooms, ramps, greens and strawberries, used in dishes for breakfast, lunch and dinner.

Although many farmers markets operate year-round, their winter selection often pales to the greater abundance of foods available in the spring and summer, a cycle that peaks in late summer, by which times markets will be brimming with tomatoes, corn, fresh herbs, greens, and...I could go on a long time.

Why buy at farmers markets? The big difference in buying ingredients from a farmers market vs. a conventional supermarket is that the food at the farmers market is grown locally, which yields a number of benefits. With all the buzz about buying organic food, a second perhaps more important drive to buy locally hasn't gotten as much attention. Often, you kill two birds with one stone, as farmers market food often is organic.

The benefits of buying food produced locally are numerous. Since it hasn't been shipped long distances, it's fresher, which means it tastes better and has more nutrients. It's thus also better for the environment, having avoided the energy requirements of international shipping. By eliminating the grocery store as distributor, you get to buy the food directly from the supplier, allowing you to form a closer relationship to the source of your food.

You also get to experience food in a more natural manner that reflects the seasons. The variety available at the farmers market constantly changes as foods come in to season. Shopping at a grocery store, you may not even be aware of what's in season, since apart from a few ingredients like corn, grocery stores tend to stock the same things year-round, whereas farmers markets offer only what's available seasonally. If you like buying tomatoes in January, that may be a downside; however, let's be frank: tomatoes in January are nasty ghost-like things that bear little resemblance to a juicy, ripe, red-fleshed tomato. Buying food seasonally means you're getting ingredients at their peak, which means your dishes will taste better.

Farmers markets also often have items that you'll never find at a grocery store: garlic scapes, heirloom tomatoes, specialty herbs, beets in colors other than purple and carrots in colors other than orange. They also have foraged foods like ramps, unusual types of mushrooms and stinging nettles. Often you have to really hunt for those things (since, after all, the farmer had to as well).

The downside of the farmers market is that it is often more expensive than buying at the grocery store, since they aren't able to take advantage of economies of scale to drive down prices. However, you can get good deals, particularly at peak harvest time. And I find that the old adage "you get what you pay for" is true. A panzanella salad made with tomatoes, basil and cucumbers harvested just days ago locally will taste markedly better than making the same salad with ingredients trucked from California or flown in from South America.
Posted by Cook In / Dine Out at 6:20 AM