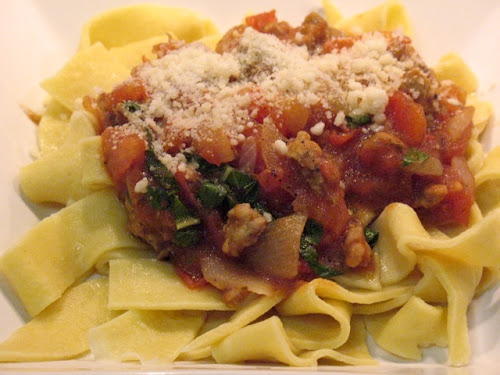 Want to really impress a crowd and make them think you slaved in a hot kitchen for hours (without really doing that of course)? Time for homemade pasta.

Making pasta is surprising easy. Every time I do it, I wonder why I don't do it more often. Clearly, it's not as simple as tossing a box of the premade stuff into a pot of boiling water, but it's not so complicated as to require days or even hours of your time. In fact, I made this dish from scratch start-to-finish in exactly 1 hour.

The secret to making quick homemade pasta is to rough it a little. I have a pasta rolling kit for my Kitchen Aid mixer, which I like and use from time to time, but doing so increases prep time significantly, makes a bigger mess and is more fussy than if you use a much simpler tool: a rolling pin. Sure, you won't have perfectly uniform results, but there's something kind of nice about that. The uneven thickness and odd shapes says "homemade" in a way that perfectly cut thin linguine does not. 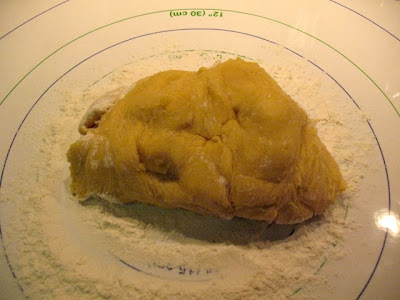 I've tried homemade pasta recipes from Mark Bittman and Mario Batali. The approach for this recipe combines what I've learned from the both of them. For the flour, I used half all-purpose flour and half pasta flour (i.e. semolina flour). Semolina flour is coarser than all-purpose flour, so the resulting dough must be kneaded a little bit (unlike Bittman's all all-purpose flour dough which doesn't need kneading--say that parenthetical a few times fast). It also requires a little more moisture to come together well. I ended up adding at least a tablespoon of water after mixing the dough to make it form a nice ball. This is a compromise: getting the easier handling of regular flour with the superior flavor of semolina. 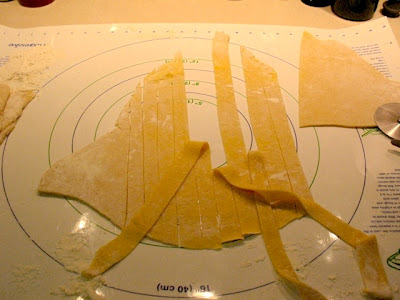 After letting the dough rest for about 30 minutes, I rolled it out. The thinner the better--no more than 1/8-inch thick and even that is pushing it. After that, I use a pizza wheel to cut it in strips about 1/2- to 3/4-inch wide. This mades it pappardelle, a type of wide fettucine. It cooks really quickly, just a couple minutes in boiling water. 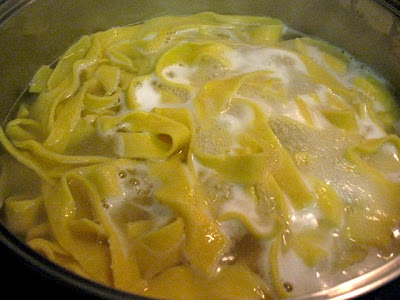 For the sauce, I went with something pretty traditional here: a tomato sauce with onions, sausage and basil. I used the Whole Foods chicken sausage and mixed hot and mild. 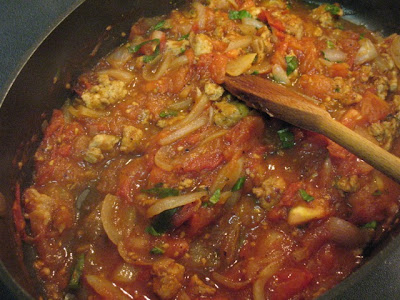 1. Add flours and salt in a food processor and pulse a few times to combine. Add eggs and keep machine running until dough comes together in a ball, adding water as needed to help it come together.

2. Place dough on a lightly floured surface and knead until dough is smooth and a bit elastic. Cover with plastic wrap and let rest for about 30 minutes.

3. After resting, place dough on well-floured surface and roll out until quite thin, no thicker than 1/8-inch. Using a pizza cutter or knife, cut dough into strips about 1/2- to 3/4-inch wide.

4. To cook pasta, bring a large pot of salted water to boil and cook noodles until al dente, about 3 minutes.  Drain and set aside.

1. Heat a large saute pan over medium heat. Remove sausage from casings and add to pan. Cook until browned, breaking up with a wooden spoon as it cooks.

2. Add onion and seasoned salt and saute until softened and lightly browned. Add oregano and tomatoes and continue to cook until tomatoes have softened and given up their liquid, making a chunky sauce, about 8-10 minutes. Add basil, nutmeg and pepper. Serve over pasta topped with cheese.