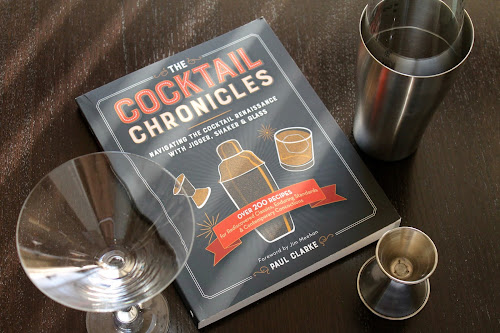 "It's just a damn drink," remarks author Paul Clarke near the beginning of his introduction to The Cocktail Chronicles: Navigating the Cocktail Renaissance with Jigger, Shaker & Glass. But, of course, it's so much more, as Clarke sets up how this "damn drink" has captured the attention of bartenders and drinkers all over the world. Whether you call it the "craft cocktail movement" or the "cocktail renaissance," it's the revolution in drinking that began in the mid 2000s (the decade) and continues to this day as cocktail aficionados (including me) rediscover old drinking traditions and the joy of fresh, quality ingredients applied alongside modern techniques and the ever-expanding availability of unique bottles. Indeed, it is an exciting time to imbibe.

Clarke's is the most hotly anticipated of this year's books about cocktails, the latest in a series of wonderful works charting recipes, techniques and traditions (see the "related links" below for some of my other recent favorites). He is the executive editor of Imbibe magazine, a bimonthly publication covering all things potable that I love subscribing to. In 2005 he started the blog The Cocktail Chronicles (where his book gets its name), which is still going 10 years later, although hasn't been updated much in recent years (because he was working on the book).

The book is grounded in the modern cocktail renaissance, but has a strong emphasis on how that contemporary movement is linked to historical cocktail eras spanning back to the late 19th century. Along with sharing a long list of great cocktail recipes, he tells the stories of these drinks and the bartenders behind them, stories that are both old and new, as well as connected. After an introductory chapter, The Cocktail Chronicles' recipes are divided into three chapters: classic recipes; contemporary recipes; and "muses & bridges," a shorter chapter on the most popular cocktails and their variations.

The book's cocktail entries are informative, charting the context and backstory of many of the drinks. Some of these segments are based on, but not identical to, posts from The Cocktail Chronicles blog. For example, Clarke's 2005 post on the classic Twentieth Century cocktail gets expanded context in the book as he charts how the 1930s-era drink inspired the recent Twenty-First Century and 30th Century Man cocktails by Jim Meehan (who wrote the book's foreword, as well as the popular PDT Cocktail Book) and Nathan Weber, respectively.

You might think everything has been said that needs to be about the Manhattan, but Clarke nicely posits the drink as a key bridge between spirit-dominated cocktails (like the Old Fashioned) and something softer like a Sherry Cobbler. He then goes on to provide recipes for 10 Manhattan variations, a mix of older ones like the Saratoga and newer ones from New York, Boston and San Francisco bartenders. The Manhattan is one of the "muses & bridges" cocktails, perhaps my favorite section of the book, where Clarke takes an in-depth look at the origins and variations of five prominent cocktails: the Manhattan, Martini, Negroni, Old Fashioned and Daiquiri. The Daiquiri more than any other drink deserves this excellent reminder that it is a refined classic and not a fruit slushie (Clarke includes eight Daiquiri variations without a strawberry or banana in sight).

A lot of the famed bars of the cocktail renaissance are in New York (PDT, Death & Co., Mayahuel, Booker & Dax, etc.), but Clarke launched his blog from Seattle, and Imbibe is headquartered in Portland. Hence, The Cocktail Chronicles' selection of newer drinks has a nice bi-coastal flavor. I found a couple of delicious examples from Portland bartenders, including the Ephemeral from Raven & Rose bartender David Shenaut, an Old Tom gin drink with floral notes of St. Germain and celery bitters, and The Graduate, a thoroughly satisfying combination of Scotch, sweet vermouth, orange curaçao and tonic from Teardrop Lounge bartender Daniel Shoemaker.

Unlike several other recent cocktail books, Clarke's recipes are written generically without specific ingredients, although he will often make suggestions either in the recipe itself or the accompanying text. I like this approach since I personally don't think cocktails need to be made so exact as require specific brands (there might be some exceptions though). In the recipes from the book below, I shared what I used to make the drinks.

The book concludes with the obligatory chapter on "bottles, tools & tips," which I found most useful for its bottles section, which Clarke packs with smart recommendations while managing to be quite concise. If you already own several of the good recent books on cocktails, the tools and tips will be familiar, but if not, Clarke covers the essentials well.

The Cocktail Chronicles would be a nice addition to any cocktail library. I would certainly include it in my recent rundown of good books for stocking your bar. Although the book lacks flashy photography, its content is solid and well organized. A cocktail book with good recipes is important, but getting the back story behind those recipes makes for an even more satisfying read. Whether you're just discovering the joy of the cocktail renaissance or are already steeped in its lore, The Cocktail Chronicles will entertain and inspire while filling your cocktail glass with not just a damn drink, but a damn fine one.


Twentieth Century
Clarke writes that "gin, lemon and chocolate is an unexpected combination, but somehow...it just works. Works? Hell, it sings.." I couldn't agree more. This is a nicely balanced drink. Its gin and citrus profile with other unusual ingredients reminds me of a Last Word. Recipe adapted from Paul Clarke's recipe in The Cocktail Chronicles, originally from the 1937 Café Royal Cocktail Book.

Combine gin, lemon juice, Lillet blanc and crème de cacao in a cocktail shaker with ice. Shake until very cold, then strain into a chilled cocktail glass. Garnish with the lemon twist.


Manhattan
Clarke shares that the original Manhattan had a 1:2 ratio of whiskey to sweet vermouth before settling into the more-whiskey version as we know it today. I usually employ a 3:1 whiskey-to-vermouth ratio when I make it with Bulleit rye whiskey, but his 2:1 is perfect for the higher-proof Rittenhouse rye. Recipe adapted from Paul Clarke's recipe in The Cocktail Chronicles.

Combine whiskey, sweet vermouth and bitters in a cocktail mixing glass with ice. Stir until well chilled then strain into a chilled cocktail glass. Garnish with a cherry.


Ephemeral
I was drawn to this drink because I have a bottle of Dolin blanc vermouth I want to use up before it goes bad. The drink's sweetness nicely mellows the bitter and floral flavors of the other ingredients. Recipe adapted from Paul Clarke's recipe in The Cocktail Chronicles, originally from David Shenaut of Raven & Rose in Portland, Ore.


The Graduate
I love the story behind this cocktail. During a visit to Teardrop Lounge, Clarke asked bartender Daniel Shoemaker to fashion an original drink from short list of ingredients. Thus, after a brief moment of "panic," the "brilliance" of The Graduate emerged--and I agree it is a brilliant drink. Recipe adapted from Paul Clarke's recipe in The Cocktail Chronicles, originally from Daniel Shoemaker of Teardrop Lounge in Portland, Ore.

Combine vermouth, whiskey and curaçao in a rocks glass with ice and stir to combine. Top with the tonic water, stir again and garnish with a lemon twist.


Related Links
Curious about other great recent cocktail books? Here are links to stories about some of my favorites.

Bitters: A Spirited History of a Classic Cure-All, with Cocktails, Recipes, and Formulas by Brad Thomas Parsons