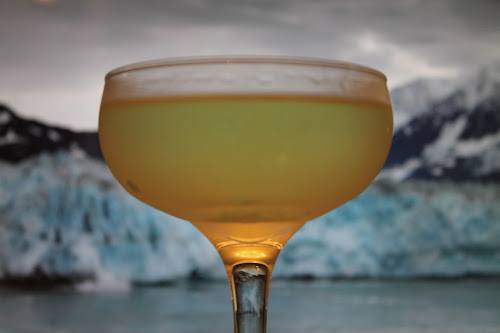 When The Cocktails Chronicles blogger Paul Clarke wrote about the Alaska Cocktail for Serious Eats in 2009, he had no idea how the drink originated, other than it appeared in the famed 1930 book, The Savoy Cocktail Book. The drink also appears in the Old Waldorf Astoria Bar Book, published 5 years later. It also offers no information on its history.

Having just been to Alaska, I really don't see how this drink evokes the state, given that it's ingredients are from Britain and France and it doesn't really taste like anything I'd associate with Alaska. It's very good though: like an herbal-sweet martini.

Perhaps the mystery of the drink is the answer to the cocktail's connection with Alaska. Alaska is a large place, far away from most Americans, with large swaths of the state unreachable by roads. Thus, it's a state with a lot of mystery, just like this drink.

Combine ingredients in a cocktail mixing glass with ice. Stir until very cold, then strain into a chilled coupe or cocktail glass. No garnish.