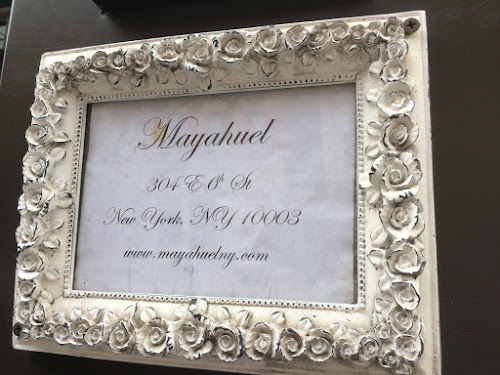 Expectations can be a bitch. Have you ever had the perfect restaurant experience only to go back a second time and feel deflated because the second visit was only so-so? It's happened to us enough times that we have been tempted to never return to spots that deliver a perfect experience.

For whatever reason, Mexican food in New York is where we tend to experience this phenomenon the most. A few years ago we were wowed by Agave, but subsequent visits lacked the initial spark. Then we fell under the spell of Black Ant, but during or second and third visits there, the magic seemed to have fizzled. Late last year we had an excellent dinner at Empellon Taqueria; but our dinner last month lacked the consistency we'd noted that first time. 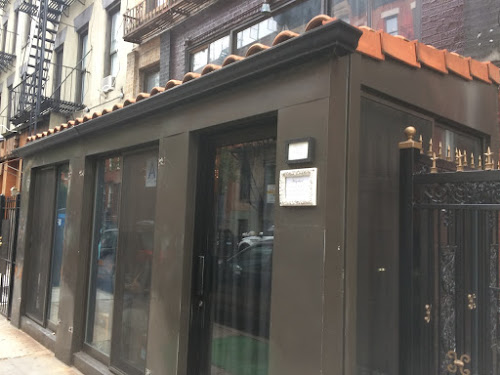 Were we tempting fate when we decided to try the menu at Mayahuel? Possibly; however, Mayahuel had already passed the first test last year by delivering a second-visit experience that was every bit as good as our first, if not better. Regular readers will recognize the name: it's the mezcal-focused cocktail bar in Manhattan's East Village that we visited last year and fell absolutely in love with. Prior to that, I was already familiar with its cocktails, which are well-known among mezcal fans. We went back again in December--twice actually, since we went before and after dinner--and continued to be smitten by its cool ambiance, talented staff and delicious drinks. During that visit, we also tried a plate of churros, and they were divine, leading us to conclude that we really should try make a point to eat dinner at Mayahuel. 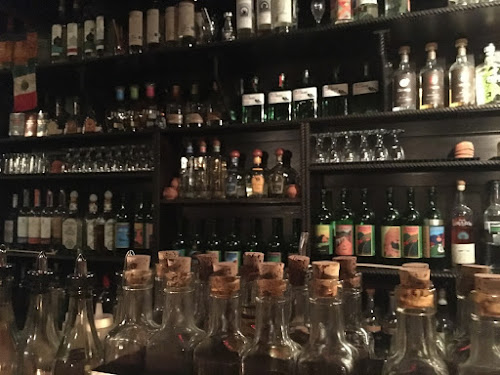 I'm happy to say that our favorite cocktail bar is now also our favorite Mexican restaurant. Dinner couldn't have been more delicious. From start to finish, dinner at Mayahuel was among the most satisfying restaurant experiences we've ever had.

The first decision was whether to sit at the bar (which was shockingly completely empty) or the upstairs dining room. Although the dining room might have been a more traditional choice for dinner, we chose the bar, knowing that it provides the best seats in the house, since you can watch Mayahuel's amazingly talented (and super friendly) bartenders work their magic. 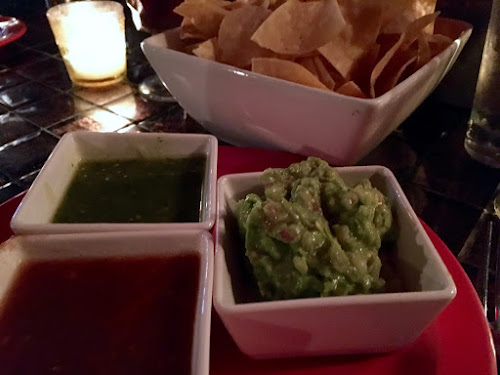 It's hard not to start a Mexican restaurant dinner with a round of chips and guacamole, and Mayahuel's traditional take on the avocado dip was quite tasty. But the smoked tomato salsa was an absolute revelation. Served warm, the salsa was intensely smoky due to the tomatoes having been charred over hickory chips. It was the best tomato salsa I've ever had and was the first of many good bites we enjoyed that evening. 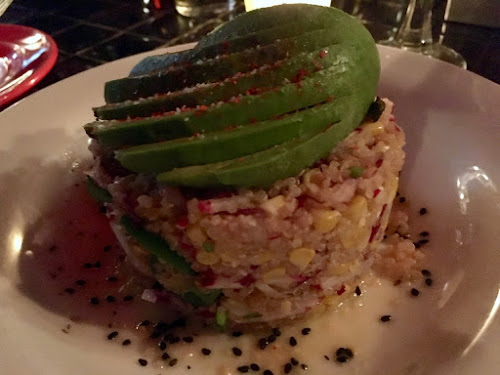 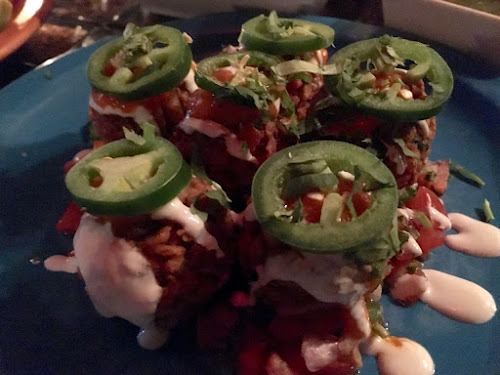 From there, we moved on to the quinoa and avocado salad, a delightfully good mixture of texture and flavor with a touch of sweetness from the corn as well as a touch of heat. I particularly liked the sesame oil dressing, which added just a hint of Asian flair. Shortly after, the croquetas arrived. Mayahuel's are black-bean and roasted-corn fritters rolled in plantain crumbs and served with roasted red pepper coulis and crema. They were tasty; however, their comparatively mild flavor got lost amid all the other spicy dishes and drinks. I should mention that if you like heat, this is good place for you. 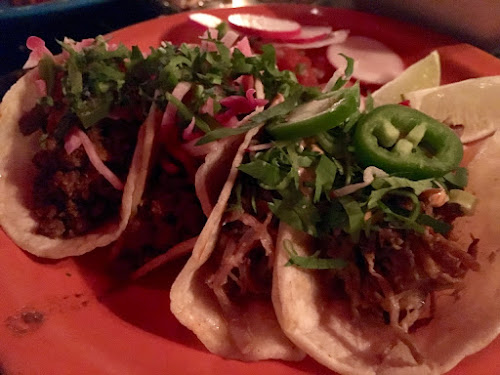 The main event was the tacos, and they were divine. A single order is perfect for sharing: it comes with four corn tortillas was your choice of two different meats. We opted for carnitas and chorizo, both of which were phenomenally good--meaty, tender and not greasy. Just excellent tacos. They arrive garnished simply with cilantro, radishes and lime wedges. We are big taco fans, and it just doesn't get any better than this. They even outclassed the tacos we had the next night at Empellon Taqueria, a well-known restaurant that's known for its tacos (its chef even published a James-Beard-award-nominated cookbook I wrote about recently). 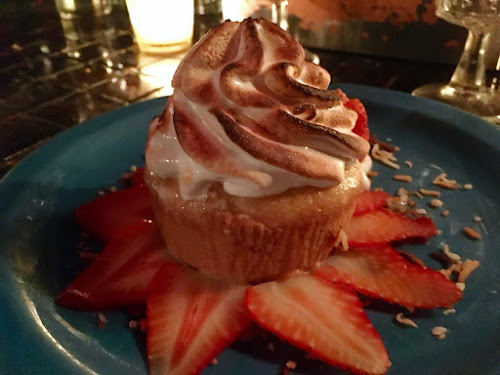 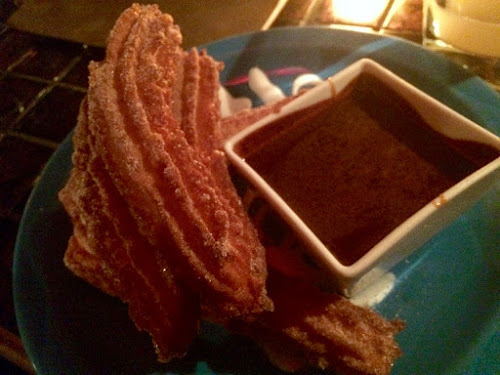 Mayahuel offers only two choices for dessert, but trust me...it's a really really hard choice. Save yourself the pain order both of them. This visit we opted for the tres leches cake, which we are huge fans of (I made one for Chris's birthday this year and last). Mayahuel's version does not disappoint. I like that they use a fairly sturdy cake for its base, but the real treat here is the torched meringue on top. Most tres leches cakes I've had come with a whipped topping, so I loved this subtle but delightful twist. During our previous visit, we enjoyed the other option: cinnamon-sugar dusted crispy churros (doughnuts) with spiced Mexican chocolate sauce. As if it isn't obvious, let me point out that deep-fried donuts showered with cinnamon sugar and set next to a spiced Mexican chocolate dipping sauce are a pretty amazing treat after a few rounds of drinks. 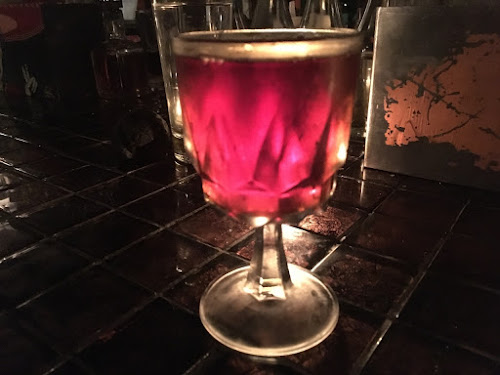 Speaking of the drinks, they continue to be as fabulous as they were during our first and second visits.  I started the night with a Chabomba, a sherry and mezcal cocktail with jalapeño-infused tequila, pear brandy, vanilla and Galliano. I absolutely loved this drink. It's a little spicy and a little savory (from the sherry), and the subtle hint of vanilla gives the drink an almost dessert quality. Brandy Alejandro is more than just a mezcal twist on the brandy-and-cream classic. The drink features chocolate-milk-infused mezcal, cognac, Cocchi Vermouth di Torino, cacao, mole and orange bitters. It's a very smooth drink, not creamy like its namesake nor as chocolatey as you might expect (which is a good thing; it's subtle).

Like heat in your drink? You gotta try the Puebla Drink with No Name. This drink is seriously spicy, made from mezcal infused with chile de arable and muscatel infused with ancho chiles. This drink was inspired by a mole that Mayahuel founder and owner Phil Ward tasted while on a trip in Mexico and fashioned a drink after it. It will be too hot for some people, but I loved its flavor. I might recommend not pairing this one with food, since it could overpower it (except maybe the churros, since the sugar will help cut the heat). 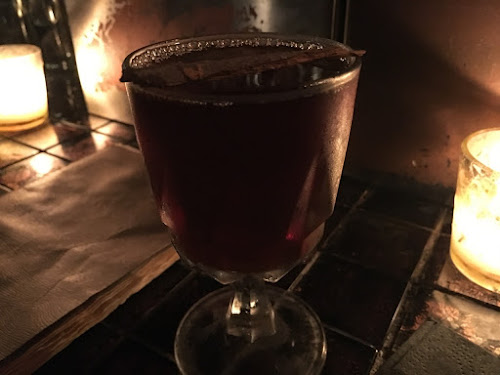 Chris enjoyed the Hidalgo, a nicely balanced smoky and bitter drink with tequila, mezcal, sweet vermouth, amaro, maraschino and Fernet Branca, and the Black Star, a wonderfully autumnal drink of tequila, bourbon, ginger, cinnamon, lemon and apple butter. It sparked a great conversation with a server, who said she used to make apple butter all the time and enjoys it on just about anything (she suggested cooking pork tenderloin with it, which is an excellent idea). He also revisited the Six Shooter, a drink we named our favorite cocktail of our last trip to New York. I'm now ready to just name it our favorite cocktail at the moment. It's an amazing drink featuring a split base of mezcal and two types of rum with touches of Punt e Mes (sweet vermouth), Rammazotti (an amaro), coffee, sugar and bitters. I so love it, that I tried to concoct something similar at home I call the Ode to Mayahuel's Six Shooter.

We never got to meet Chef Vincent Gonzalez, but we sure did enjoy his food. We did, however, get to enjoy the company of our bartender, Nicole, and a server, Rachel, who stopped by the bar often to pick up drinks for diners upstairs. These were two of the nicest restaurant staff I've ever met. I loved watching Nicole mix drinks and chat with her about them, and Rachel had such enthusiasm for the food and drinks. Food makes or breaks a restaurant, but service is critically important too, since good service shapes the experience into something truly special. We felt more than taken care of by these nice people.

Expectations, as I said, can be a bitch, but Mayahuel, as a restaurant, more than exceeded the high expectations set by our prior visits to the bar. For the last year, we've been telling people that it's our favorite bar in New York, and it's now also our favorite Mexican restaurant.

Getting Serious About Mezcal