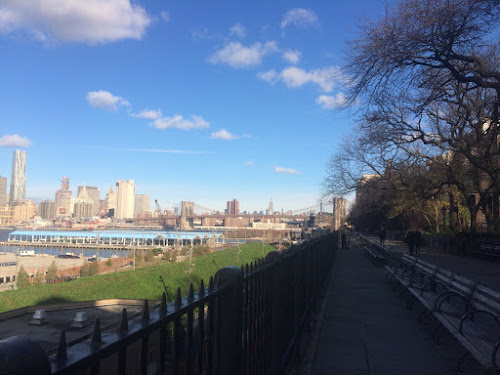 We've visited New York enough times now that we have a number of favorite spots. It's easy to go back to them. But during our recent trip, I wanted to focus on visiting new places, so we headed to a trio of "hot and new" type places plus a taqueria that I've been wanting to try for years. We also made a return trip to last year's favorite bar, which further strengthened our view of said bar as our favorite.

Timna - Not Your Typical Middle Eastern

Middle Eastern cuisine has been popular for while, but Timna does a good job expanding its flavors beyond the usual ingredients. A helping of the kubaneh bread is an essential starter. The buttery, pillowy bread--similar in flavor and texture a soft brioche--arrives in a flower pot for you to tear off little pieces to swipe through the creamy labaneh (strained yogurt) and chunky tomato dip. Chewy farro grains arrive topped with an assortment of vegetables, including beets and wonderfully charred zucchini, dressed with tahini and sweetened with a little date molasses.

For our main entrees, I chose the wild fish, which our serve said was tilefish. The flaky white fish was perfectly cooked and accompanied by spinach, chickpeas and artichokes. Chris opted for the pumpkin and ricotta ravioli, which arrive with more artichokes and pumpkin seeds. Both of these dishes were good, although I liked our starters better. We finished with the chocolate pudding with caramelized banana slices, shaved coconut and an enticing whiskey-nougat ice cream.

Tucked away below ground-level in the East Village, Timna is a handsome little restaurant decorated with slate blue paint and roughed-up exposed brick and lit with low honey lighting. Service here was fine, not problematic but not exceptional. The restaurant has received a number of accolades, including being named last year's best new restaurant by USA Today. I would definitely recommend this place, although it wasn't our favorite of the week.

Another night, we popped into Kat & Theo, a beautiful space in Flatiron serving comforting classics from American and European influences.

Needing something green, we started with a frisee salad, which was simply adorned with crispy lamb bacon and radish slices. We went meaty for our mains: I had the tender lamb shank, which came with farro and roasted vegetables. Chris had the flatiron steak, which was cooked a just-right medium-rare and served with vegetables.

Both of our meat dishes were very good, but our side of cauliflower stole the show.  The roasted florets are draped with a sweet fig and pine nut sauce, which made for a perfect accompaniment. Our dessert, a deconstructed carrot cake, was also quite tasty.

Kat & Theo also has an interesting cocktail menu. I sprang for the Coco Rosie, which had a lot of good flavor with its cardamom-infused rye, rum, currant liqueur and coconut. Unfortunately, this drink was served in a tall glass but with a regular-size straw.

Service here was among the best we enjoyed during our week in New York, mostly due to friendly who made the evening go quite smoothly. 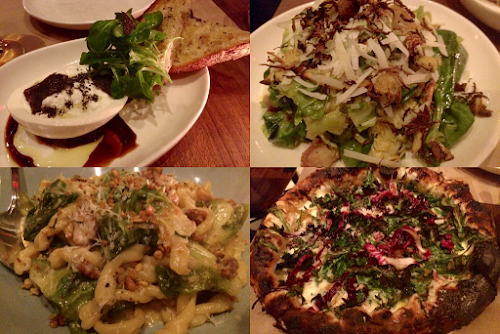 Last of the "hot and new" places was L'Amico, a somewhat lazy pick, since we were staying in the Eventi Hotel where this Italian hot spot is located. The restaurant is an attractive corner space in the hotel building, warmly lit with good views onto the street. It's also quite bustling--vacant tables didn't stay that way long, and most of the people around us looked to be having a great time.

I thought all our food was good, but nothing really stood out as particularly memorable. I preferred our starters to our entrees. Creamy burrata arrived flecked with the unmistakable scent of shaved truffles, and the Brussels sprouts salad was nicely composed with hazelnuts, salsify and pance (like bacon). The charred kale pizza was bit overcooked--the charred kale itself was great, as well as its pairing with caraway, onion and pecorino and robiola cheeses--but the crust was burnt in places. I love a well-charred pizza crust, but this crossed that unfortunately line into ashy territory. Fusilli wth spicy sausage, bitter greens, pine nuts and pecorino was a satisfying pasta dish.

Also noteworthy was the Brooklyn Bound cocktail, which nice enhanced the flavors of the classic Brooklyn cocktail--usually made with rye, dry vermouth, maraschino liqueur and bitters--with Italian Punt e Mes and Ramazotti, plus Luxardo maraschino liqueur that's been infused with star anise. Lastly, I've read that the service here can be spotty, but am pleased to report that we experienced no issues with the service, which was friendly and efficient. 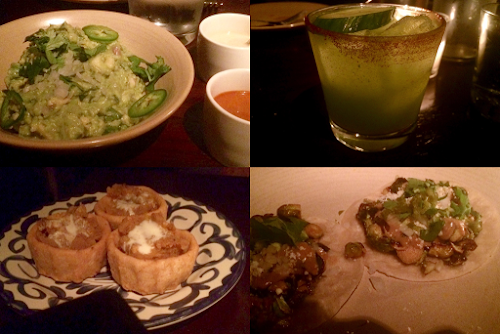 Empellón Taqueria - Our Best Meal of the Week

The best meal of the week was not from one of these newcomers, but Empellón Taqueria, hands down. Everything about our visit clicked: food, drinks and service. We arrived a little early, and it was pouring rain outside. Did that phase Empellón? Not at all. They happily seated us and quickly got us started with some guacamole and a round of margaritas. I'm a sucker for a good mezcal margarita, and Empellon's is nicely done, including a rim of smoked salt. If you like your margarita a little spicy, the spicy cucumber is also a great one, done with blanco tequila, fresh cucumber, jalapeño tincture and chile salt.

The guacamole was excellent--freshly prepared (not by the table but in the kitchen where food is supposed to be prepared) and served with really good corn chips and two salsas: a spicy red and the creamy smoked cashew. We also enjoyed a starter of smoked plantains, which arrived not in the sliced-and-fried format I was expecting but formed into crisp little cups filled with mashed plantains topped with a dollop of fresh crema. Because I think playing with celery and peanuts can be interesting, we also ordered the celery root vegetable starter with toasted peanuts, which reminded me a bit of the roasted celery with peanut sauce I made last year.

Of course, this is a taqueria, so we did our part to order a selection of tacos, all of which were really good. The Sunday special tacos of cochinita pibil (slow-roasted pork) topped with pickled onions and cilantro arrived first, whetting our appetite for more. It was soon sated by the equally delicious Brussel sprouts tacos and, perhaps our favorite, the skirt steak tacos, which were stuffed with tender steak, onion and mojo de ajo, a spicy garlicky gravy. We capped this wonderful meal with a helping of chocolate flan served with Mexican cinnamon ice cream--a great way to end a great meal.

Service at Empellón was uniformly excellent. The hostesses greeted us warmly as we arrived (early) in from the rain. Our server was friendly and efficient, the bar provided our drink orders quickly and nobody removed a plate from our table without asking first, which I really appreciated.

With this dinner, Empellón Taqueria replaced The Black Ant as our new favorite Mexican restaurant in New York. It was so good, that I will make a point to revisit its sister restaurant, Empellón Cocina, which we visited in 2012. At the time, we were disappointed, although I thought a number of the dishes were really interesting (including the cashew salsa, which I made at home). Perhaps they or we were having an off night, so I think a second look is in order. I also want to visit Alex Stupak's newest Empellón, Empellón al Pastor, which focuses on al pastor tacos while also having a number of other tacos on the menu (and drinks of course). 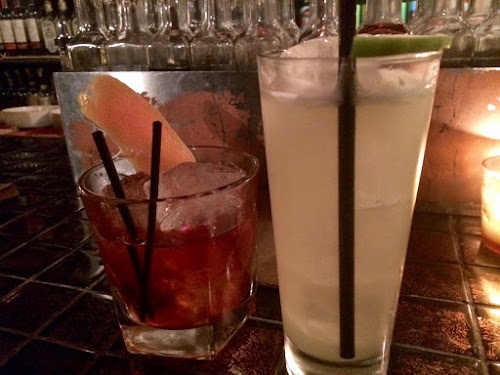 Lastly, we popped into Mayahuel for a drink before dinner one night in the East Village. We visited Mayahuel last summer and were smitten with the bar's unique take on mezcal- and tequila-focused cocktails. Our more recent visit further cemented Mayahuel's status as our favorite bar (in New York or elsewhere). Once again, each drink we had was amazing--tasty, interesting and well-made. The best place to sit in Mayahuel is at the bar, since you can watch the bartenders work with their arsenal of spirits, mixers, garnishes and equipment. They are a very exacting, knowledgable and friendly lot.

Last time we were there, I tried the Dijahbone, which was unique because it was made not with mezcal or tequila but sotol, another Mexican spirit that is slowly emerging in the U.S. I was excited to see that Mayahuel has expanded their use of sotol into its own category of drinks on the menu, with five choices at present. The Chance Seeding blends sotol with sherry, apple, Velvet Falernum and line, with the cheesy funkiness of the sotol playing so well with the apple. We also really enjoyed the Mamasita, a sort of Negroni riff with tequila, sweet vermouth, Campari, maraschino liqueur, a touch of mezcal and whiskey-barrel-aged bitters. Best cocktail of the night--and the entire trip--was the Six Shooter, a fantastic dark and smoky drink made with mezcal, two kinds of rum, Punt e Mes, Rammazotti and orange and Angostura bitters.

After our dinner, we tried to get into Amor Y Amargo, but it was packed, and Death & Co had a 1 1/2 hour wait. So we found ourselves back at Mayahuel to finish our evening with yet another round of amazing drinks. Although I think of Mayahuel as a bar, it's a restaurant too--next time, we'll definitely be staying for dinner (we had a bit of a preview--I couldn't resist ordering some churros with chocolate, which were amazing).