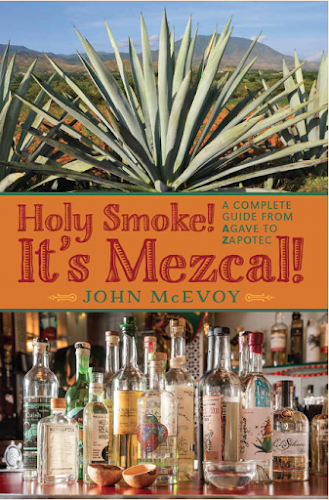 For a long time, ask me what my favorite spirit was and I'd say "gin." But sometime last year, the answer changed to "mezcal." I'm not the only one who's coming around to Mexico's oldest spirit.

I've been interested in mezcal for some time, but it was my ongoing love affair with New York's mezcal-focused bar Mayahuel that really convinced me that mezcal was something special. Since then, I've broadened my exposure to this spirit significantly. I've tried different mezcals from the Del Maguey line. I've learned more about it from blogs, bartenders and liquor stores. But it was reading John McEvoy's Holy Smoke! It's Mezcal! where I really started to feel like I was getting educated. McEvoy, author of the blog Mezcal PhD, has written a well-researched and approachable book on this interesting spirit.

Reading Holy Smoke! gave me a much deeper appreciation for how much variation there is in mezcal and how uniquely tied the spirit is to its source ingredients and terrroir--that is the environmental factors of its production. McEvoy also does a particularly nice job of exploring the history of the rise of tequila's popularity, contrasting that with the (until recently) comparatively slower growth in popularity of mezcal. He even discusses the regulatory differences between the two spirits and the impact of their attainment of Mexican regulatory status--known as the "Norma Oficial Mexicana (NOM)"--and international regulatory status--the "Appellation of Origin," which he refers to as being akin to a "Denomination of Origin (DO)." McEvoy credits these certifications as helping to legitimize these spirits in the international market, which in turn helped spur their burgeoning export market. Tequila got its international status in 1978, while mezcal didn't receive it's DO until much later in 1995. Hence, tequila has had a good head start on mezcal, and the latter has a lot of catching up to do.

Critically, mezcal has had to overcome its unfortunate and undeserved reputation. A lot of people think of mezcal as "the bad tequila with a worm in it," which is so so far from the truth. Mezcal isn't tequila at all, rather, tequila is a form of mezcal that's made only with blue weber agave and produced in certain regions of Mexico--primarily Jalisco--as specified in the DO. As tequila has become more popular with time, its production has become quite industrialized to meet that demand. Mezcal, on the other hand, may be made from any of 50 varieties of agave plants (espadin is the most common), is typically made by small-scale producers and is usually produced through more traditional methods, including roasting the agave hearts, known as piñas, in outdoor earthen ovens. This imparts mezcal's signature smoky flavor (tequila, in contrast, is typically pressure-cooked, hence, no smoke). Most mezcals, particularly the better ones, don't come with worms (the widely available brand that does is Monte Alban, which isn't considered a particularly good mezcal by McEvoy, although I'll confess I've never tried it). Much of this information is covered in great depth in the book's opening chapters on the characteristics, history and production of mezcal.

The latter part of the book changes focus from making mezcal to drinking it. The important part! There's a chapter on hosting a mezcal tasting, a rundown of all the major brands available in the United States (an updated version appears on McEvoy's website, although the book has more detail about each bottle), and a wonderfully long list of mezcal cocktails. McEvoy acknowledges that some so-called "purists" snub using mezcal in cocktails, but I'm glad that he doesn't feel that way, as I think mezcal cocktails are brilliant. McEvoy did a nice job selecting a mix of drinks that includes some simpler and more complicated cocktails and a few that call specifically for aged mezcal. Many of the drinks call for lime and agave, making them similar to margaritas, but mezcal goes nicely with other flavors too, such as herbal liqueurs like Chartreuse. I've shared the recipes for a few of the drinks I made from the book below (check back on Friday for a list of other cocktails I like to make with mezcal).

While it's becoming easier to find mezcal, selection is still often limited at most liquor stores. During an informal scan of six liquor stores near my home, I found their stock of mezcal ranged from none to a surprisingly good selection (for mezcal, at least) of 10 choices at Magruder's in Chevy Chase. Also promising was that Del Maguey Vida, a very decent entry-priced mezcal that's great in cocktails, was the most commonly available option, although it ranged in price from $35 to $42. You may be surprised that I consider that "entry-level" pricing, but mezcal does not come cheap, with many bottles priced in the $50-$100 range. The only one I've ever seen for less is Monte Alban mezcal, which is the one most everyone, including McEvoy, agrees is not very good. All of these liquor stores have many more times the variety of tequila and in a wider range of prices (at Calvert-Woodley, for example, you can pay as little as $15 for a fifth of "mixto" tequila or as much as $350 for a special aged añejo, whereas mezcal runs $26 to $43). I've been particularly impressed by the selection of mezcals at Eye Street Cellars, which includes quite of few bottles from the Del Maguey line I love so much.

McEvoy and others are doing their part to educate consumers about mezcal, but its sales in the U.S. are still quite small compared to tequila, despite making significant inroads in recent years. According to Fortune magazine, mezcal exports about doubled from 2011 to 2014, rising from 647,989 liters to almost 1.2 million liters. But that's still less than 1 percent of tequila exports, which surpassed 172 million liters in 2014. Yet, if mezcal were to be produced on a scale as large as tequila, it might lose its distinctiveness. Much of its uniqueness comes from the fact that it's produced in smaller quantities by smaller operations employing less industrialized methods. There's also the issue of sustainability, as agave plants take years to mature. Were mezcal production to ramp up dramatically, that crop would have to be very carefully managed. McEvoy's clear appreciations for mezcal comes through as he discusses these issues. And if you devour this book like I did (preferably with a glass of mezcal or a cocktail at your side), I hope you have a growing appreciation for this amazing spirit too.

Below are three drinks I made from the book, all of which are of the "medium" difficulty I would say. If you're going to rim the glass with salt or sugar do that first. Pour the salt or sugar onto a small plate. Moisten the rim of the glass using a cut piece of lime then roll the outer part of the rim through the salt until you have a nice even coating. Lime and lemon juice should also be acquired from fresh fruit. Bottled juices just don't cut it, especially those fake-tasting ones in the plastic containers shaped like citrus fruits. 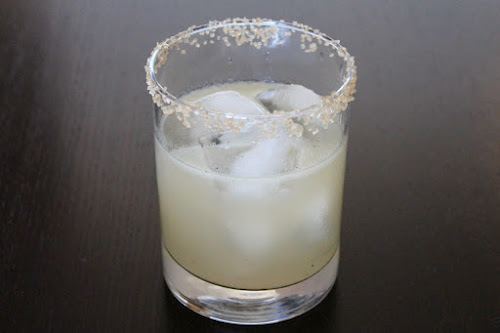 Sweet Lips
Adapted from a recipe by John McEvoy for Holy Smoke! It's Mezcal!

This drink is seriously spicy. Serrano peppers may be small, but they pack a powerful punch. The two little muddled slices I used for this cocktail gave it a very strong kick. Be warned if you don't like a spicy drink, but if you do, this cocktail is awesome. I love the vanilla with the mezcal. I was attracted to this drink because I had some vanilla syrup on hand, and this was the perfect way to use some of it up.

Add serrano slices and lemon to a cocktail shaker and muddle. Add the mezcal, vanilla syrup and agave nectar, then fill the shaker with ice. Shake until very cold, then double-strain into a sugar-rimmed rocks glass with ice (see note).

Notes: to make the syrup, combine 1/2 cup sugar (I used demerara sugar), 1/2 cup water in a medium saucepan. Split a vanilla bean down the middle and scrape the seeds into the pan (add the bean pod too). Bring mixture to a boil, stir to ensure sugar dissolves then remove from heat. Allow to cool, then transfer to a container and store in the fridge. To "double-strain" a drink means to use both a typical Hawthorne cocktail strainer in the shaker and a fine-mesh sieve held just above the glass to catch any seeds or little bits from the muddled pepper. 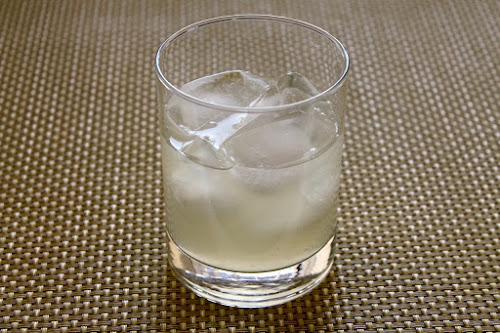 Under the Volcano
Adapted from a recipe from the former restaurant, Los Americanos in New York City

Although this has a chile pepper too, it's far milder than the Sweet Lips drink, although that may depend somewhat on how potent your jalapeño is, since they can range from no hotter than a green bell pepper to oh-my-god-my-mouth-is-on-fire hot. This is a good example of how herbal flavors play well with mezcal.

Combine mezcal, jalapeño-rosemary syrup, lime juice and bitters in a cocktail shaker with ice. Shake until very cold, then strain into a rocks glass filled with ice.

Note: to make the syrup, combine 1/2 cup sugar, 1/2 cup water, two jalapeños split and quartered and the leaves from a 4-inch sprig of rosemary in a medium saucepan. Bring to boil over high heat, then set aside to cool. Pour all of the mixture into a container and let it sit in the fridge overnight. Strain after 24 hours (you may leave the jalapeño in longer for more heat). Store in the fridge and use within a week. 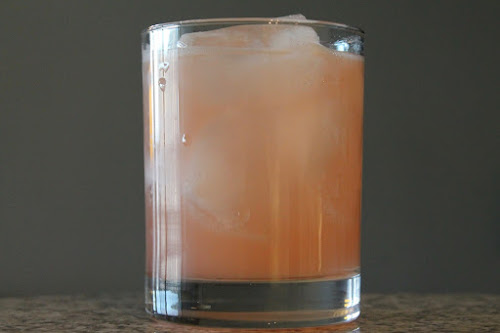 Mom's Mezcal Margarita
Adapted from a recipe by John McEvoy for Holy Smoke! It's Mezcal!

I really liked this drink a lot and not just because I thought it was sweet that McEvoy said his mom enjoys mezcal margaritas this way. I've had plenty of mezcal margaritas, but I'd never seen one with brandy before. And the Peychaud's bitters give a lovely light pink color.

Combine the mezcal, brandy, lime juice, agave nectar and bitters in a cocktail shaker with ice. Shake until very cold, then strain into a rocks glass with ice. If you prefer, rim the glass with salt before pouring the drink and garnish with a lime wedge.