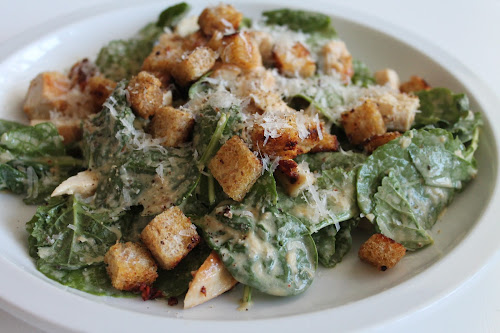 I often cook chicken for salads by pan frying chicken breast cutlets--those chicken breasts that have been sliced in half, making them easier and quicker to cook. I usually do this in a stainless steel frying pan with some olive oil and season the chicken with salt and pepper, maybe a sprinkle of garlic powder, a dash of dried oregano and a pinch of Aleppo pepper flakes. It's easy, quick and delicious.

What's also delicious is the olive oil left over in the pan: seasoned and dotted with little bits of chicken, including whatever chicken fat might have been clinging to the edges of the chicken cutlets. My husband discovered the joy of swiping a piece of bread through the seasoned olive oil and thus was born a favorite ritual whenever I make a chicken-based salad. 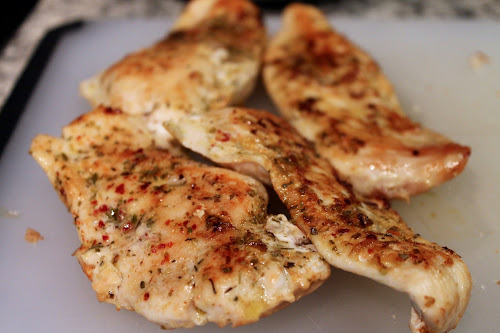 This Caesar salad was born from that ritual. Rather than hover around the stove with the seasoned olive oil after dinner, what if I could incorporate it into the salad itself by frying croutons in it? Chicken and croutons immediately made me think of chicken Caesar salad and the rest was easy.

Well, almost. I wanted a good dressing. Caesar dressing traditionally is made with anchovies--which I'm all for--and raw eggs--which I'm not. So I substituted mayonnaise for the egg yolk, considering that commercial mayonnaise is, after all, an emulsion of raw eggs and oil, albeit one that's been pasteurized, alleviating safety concerns about raw egg. 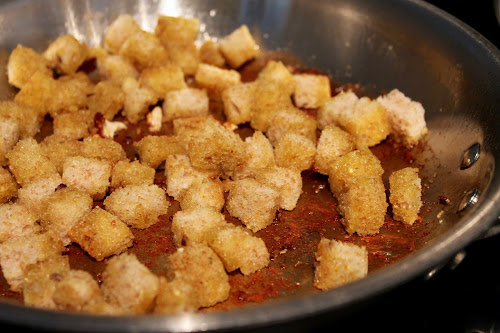 Caesar salad is also traditionally made with romaine lettuce, but I went with a comparatively hardier mix of baby spinach and baby kale (despite the "baby" these are more substantial greens than lettuce).

1. Heat 2-4 tbsp. olive oil in a medium frying pan over medium heat (I recommend using a stainless steel pan and not a nonstick pan to get better browning on the chicken). Add the chicken and season with garlic powder, oregano, salt and Aleppo pepper. Cook the chicken until browned and cooked through, about 10 minutes total, turning after the first 5 minutes. Transfer chicken to a cutting board. Allow to cool a bit, then cut into bite-size chunks.

2. Add the bread cubes to the pan and stir to coat with oil. Toast in the pan until browned, about 3 minutes, stirring every minute or so. Set the toasted bread cubes aside to cool.

3. Make the dressing: Add the garlic, anchovies and a pinch of salt to a small bowl (such as a 1-cup Pyrex measuring cup), use a blunt instrument (like the rounded end of a wooden cocktail muddler) to grind the garlic and anchovies into a paste (alternatively, do this in a a mortar and pestle if you have one). Add the lemon juice, Worcestershire sauce, mayonnaise, salt and pepper and beat with a fork to combine. Add the 2 tbsp. of olive oil and beat with a fork until combined and thickened.

4. Combine the greens, chicken, dressing and half the parmesan cheese in a large bowl. Toss to combine. Divide between two plates, top with the croutons, additional parmesan and more freshly ground black pepper.