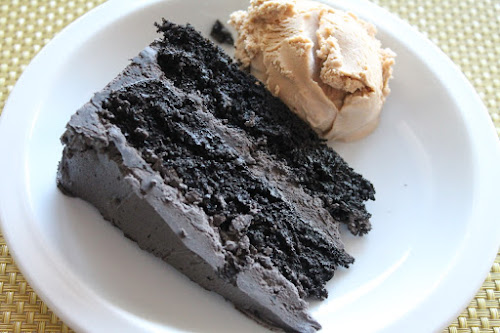 "Show me again the power of the darkness, and I'll let nothing stand in our way. Show me, grandfather, and I will finish what you started."
--Kylo Ren (a.k.a the grandson), Star Wars: The Force Awakens

"Give yourself to the Dark Side. It is the only way you can save your friends. Yes, your thoughts betray you. Your feelings for them are strong. Especially for... sister. So, you have a twin sister. Your feelings have now betrayed her, too. Obi-Wan was wise to hide her from me. Now his failure is complete. If you will not turn to the Dark Side... then perhaps she will... "
--Darth Vader (a.k.a. the grandfather), Return of the Jedi

The force is strong in the Skywalker family. That much is certain. What's unfortunate is that it's not always the good side of the force--the side of the Jedi--but sometimes the dark side. Spoilers ahead, but I doubt there are many people with any interest in Star Wars that don't realize that Anakin Skywalker had two kids--Luke and Leia--then turned to the dark side and became Darth Vader. He later tried to recruit a young-adult Luke to the dark side. "Join me, and together we can rule the galaxy as father and son," implored Vader, moments after having chopped off Luke's hand. Family dysfunction isn't just universal, it's intergalactic apparently.

Luke, of course, had no interest in the dark side. But Luke's nephew, who's Leia's son and thus also Anakin's grandson, Ben Solo, took after his grandfather and joined the dark side, changing his name to Kylo Ren. Imagine if Darth Vader and Kylo could have joined up? They'd have gotten into some pretty serious dark-side stuff that I imagine is way different than anything most of us do when hanging out with grandparents. Stuff like blowing up planets, force-choking your opponents and hiring bounty hunters to help track down wayward adversaries. 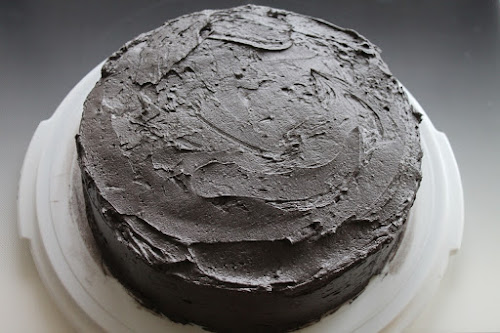 And were those dark-side-of-the-force Skywalkers to accomplish those tasks, surely they would celebrate together afterwards with a cake like this. This is a black chocolate cake. Not a regular chocolate cake or a dark chocolate cake but honest-to-goodness black chocolate. Just to look at it is to feel as all the goodness of your soul is sucked out into the cake. Just like the dark side, it's very tempting. You'll want a slice. Trust me, it's useless to resist.


Star Wars fun aside, this is a wonderful cake, which I made as my birthday cake this year. The recipe is an adaptation of Sally's Baking Addiction's Triple Chocolate Layer Cake. Sally's cake was almost exactly what I was looking for when I wanted a dark, rich chocolate layer cake. I say almost because I wanted to push the chocolate even darker and richer. To do so, I substituted Dutch-processed cocoa for the natural cocoa called for in Sally's recipe. And not just any Dutch-processed cocoa, but black Dutch-processed cocoa (I used Cocoa Trader brand), which is as dark as cocoa gets. It's one of those "black" ingredients that's actually dark brown. This stuff is black as the night sky. I get scared just looking at it. 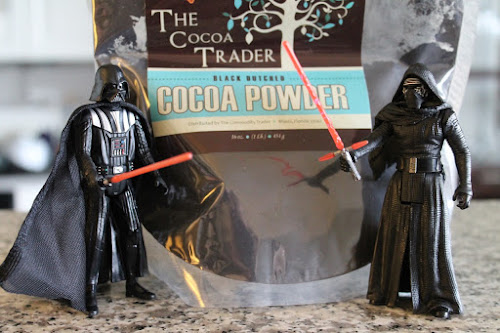 So what's the difference between natural and Dutch-processed cocoa? It's actually pretty important. Cocoa is naturally acidic, thus natural cocoa--for example, the kind Hershey's makes--is an acidic ingredient. Acid is an important element in the chemistry of many baked goods, which rely on the chemical reaction between an acid and a base to produce carbon dioxide. In the batter, the gas is trapped as thousands of tiny little bubbles, which provides "lift," making the cake (or cookies or bread) rise and become less dense. Without this, your baked goodies would have a very dense texture that, in most cases, would not be very appealing. One of the easiest places to see this reaction is in making buttermilk pancakes, which call for buttermilk (an acid) and baking soda (a base). As the batter cooks on the griddle, little bubbles form in the dough. I learned at a young age that when those bubbles start to burst, your pancake is ready to turn over, but what I didn't realize was that those bubbles were carbon dioxide formed by the chemical reaction between the buttermilk and baking soda in the batter. 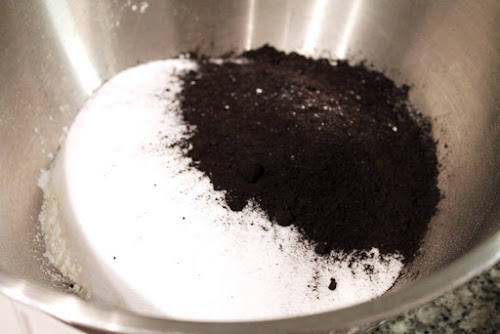 In contrast to natural cocoa, Dutch-processed cocoa has been treated with an alkalizing agent. This makes the cocoa darker, but it also neutralizes its acidity. Thus, it won't react with baking soda to create lift, so something else must be added. That's where baking powder comes in. It's a mixture of baking soda and acid-salts, so it contains both a base and an acid. That's why if you add water to baking powder it fizzes, since the water activates the chemical reaction to produce carbon dioxide. Similarly, when you add water to baking soda, it doesn't fizz, since that acid-base reaction isn't occurring. This is also why baking powder isn't as shelf-stable as baking soda, since heat and moisture can cause baking powder to basically react with itself, rendering it less effective. So remember to replace your baking powder periodically, especially if you don't do much baking. 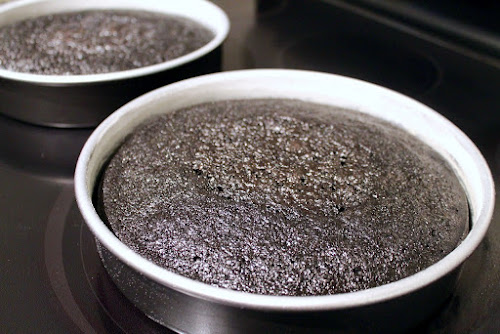 Sally specifically says not to use Dutch-processed cocoa in her recipe, since she formulated her leavening for natural cocoa. Elsewhere on her site, she has great discussions about both baking powder and soda and using natural vs. Dutch-processed cocoa. So, I don't doubt her at all when it comes to her recipe. That said, since I'm aware of the chemistry involved, I thought it would be a good cooking challenge to figure out how to adjust the leavening appropriately to account for Dutch-processed cocoa. Sally's original recipe called for both baking soda and baking powder. It also contains buttermilk, which is another acid. So in using Dutch-processed cocoa, I was only eliminating the acid from the cocoa, not all the acid in the recipe, as the buttermilk would still be reacting with the baking soda. I basically just needed a little additional baking powder to account for the lost acid in the cocoa.  After consulting with a coworker who's a baking pro, I figured that doubling the baking powder (from 1 to 2 tsp.) and cutting the baking soda (from 2 to 1 tsp.) would probably be enough to account for the difference. Turns out, this was right, as the cake rose a desired amount and produced the kind of cakey-rich texture I was hoping for. 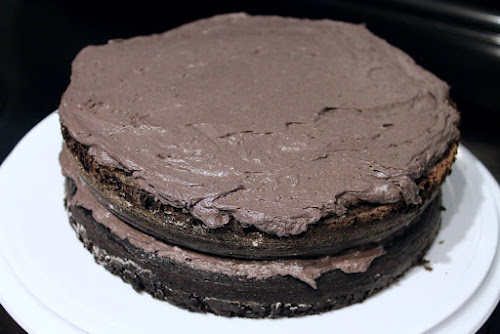 The Dutch-processed cocoa is also used for the frosting. Here, the chemistry isn't important, since frosting doesn't "rise," the cocoa is just there for flavor and color. Be sure to use butter that's at room temperature for making the frosting. If you forget to set the butter out to warm up, proceed very cautiously if you use the microwave, since melted butter will not work for making a creamy frosting (if you do happen to melt it, you'll need to let it cool down and re-solidify before proceeding). 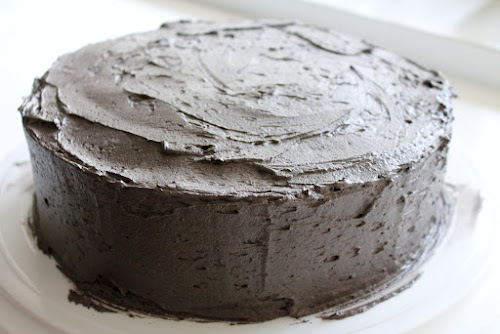 Note: 1: I've repeated Sally's weight-based measurements in grams, as I agree that measuring dried ingredients by weight is more accurate for baking and grams are more precise than ounces, since they are a smaller unit of measurement. I've also included the volume measures (i.e., cups), for those who do not have a kitchen scale (but I recommend getting one, as they are very useful).

Note 3: Used a stand mixer for making the cake batter and frosting. If you don't have one, instead, use a large bowl and a hand mixer.

2 1/2 sticks unsalted butter, softened at room temperature
360 grams (3 cups) powdered (confectioner's) sugar (Sally's recipe called for using 3 to 4 cups, depending on how thick you want the frosting; I like a little thinner frosting, as I find it easier to spread of the cake)
65 grams (3/4 cup) black Dutch-processed cocoa powder
1/4 tsp. salt (or more to taste)
1/4 cup heavy cream
1 tsp. vanilla extract

2. Prepare two 9-inch round cake pans by buttering both pans, placing a round piece of parchment in the bottom of each pan, buttering the parchment, then flouring the pans with the parchment in place (refer to this Cook-In 101 primer on baking cakes if you need more in-depth instructions on this method of prepping cake pans).

4. In the bowl of a stand mixer (see note 3 above), combine the buttermilk, oil, eggs and vanilla extract and mix on medium-high speed until combined. Reduce the speed to low and slowly add the combined dry ingredients to the wet ingredients in the mixer bowl, then add the coffee. Stop the mixer, scrape down the sides with a spatula, then turn the mixer back on to make sure the ingredients are evenly blended. The resulting batter will be quite thin, which is expected.

5. Pour the batter evenly into the two two prepared cake pans. Lightly tap the pans on the counter (this is make sure there are no large air pockets). Bake until a toothpick inserted in the center of each cake comes out clean, about 23 to 27 minutes (my cakes were done and perfect at 23 minutes, but you may need longer). Set the cakes on individual round cooling racks and allow to cool for about 15 minutes.

6. Using a plastic knife, carefully run the knife around the edge of the cakes to separate them from the sides of the pan, Set an inverted round cooling rack on top of the cake, then carefully invert the cake and the rack. Slowly remove the cake pan, leaving an upside-down cake on top of the cooling rack. Repeat with the other cake. Carefully remove and discard the parchment rounds. Allow the two cakes to cool completely before frosting.

7. Make the frosting: Add the butter to the bowl of a stand mixer (clean it out first if you're using the same bowl you made the cake batter in) and beat on high until very creamy, about 5 minutes. Reduce the mixer speed to low and slowly add the powdered sugar, cocoa powder and salt to the butter. Add the vanilla and the cream on low speed, then, once incorporated, increase speed to medium and beat for about a minute. Stop the mixer, scrape down the sides of the bowl with a spatula, and beat a little bit more until the frosting is evenly mixed.

Oscar Cocktails Bonus: The Lightsaber (Star Wars: The Force Awakens)
Posted by Cook In / Dine Out at 12:00 AM