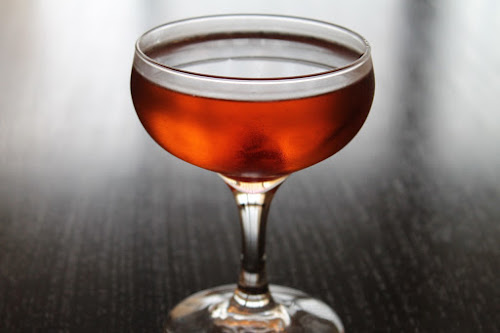 "How does a bastard, orphan, son of a whore and Scotsman, dropped in the middle of a forgotten spot in the Caribbean by providence, impoverished, in squalor, grow up to be a hero and scholar?"

Yes, we're talking about the "ten-dollar founding father without a father," Alexander Hamilton, the subject of what's become the most popular and acclaimed Broadway musical in a generation, Hamilton: An American Musical written by Lin-Manuel Miranda, who also stars in the titular role. When the Tony Award nominations are announced tomorrow, Hamilton is sure to get many.

I created this cocktail to celebrate the musical as well as the book it is based on, the biography Alexander Hamilton by Ron Chernow, which I recently finished reading. I started the book in March and began listening to the musical around the same time, as my husband bought me the CD for my birthday.

Reading the book while falling in love with the musical has been a rich and rewarding experience. Finishing the book feels like a monumental achievement given its length and depth. That said, it's written in a way that's narrative-driven and very approachable for a historical biography of its scope. The musical is easy to love. And it's simply brilliant, deserving of all the accolades that have been heaped on it. I love its use of contemporary musical styles and vernacular to tell the story of a key founding father--one that was not born into an "important" wealthy family nor served as president. Cast with almost all minority actors--portraying historical figures that were all white--the show implicitly comments on today's conversations about race and immigration while revealing that these are issues the country has wrestled with from its inception. On many occasions I find myself humming or singing lines from memorable songs like "My Shot," "Satisfied" and "Non-stop." My husband and I see musicals sometimes in New York, but I'm not one of those people who love musicals and memorize all their songs...until now. Never before have I fallen so hard for one. 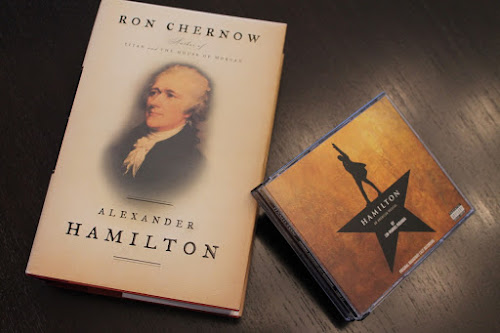 Creating this drink was seriously challenging. Thankfully, Hamilton's storied biography provides much to be inspired by. I wanted the drink to nod to his Caribbean roots (rum, perhaps?), his life in New York (apples maybe?), the challenges of his political career (lemons, for all the sour exchanges with adversaries?), and his close association with Washington (cherry, a no-brainer). That's already a lot, not to mention wanting to also somehow include his family, his role in the Revolutionary War, his affair with Maria Reynolds (scandal!), and the writing of The Federalist and countless other articles and documents.

It took me several attempts to arrive at a drink I really liked. My first shot included smoky Laphroaig Scotch whisky, which I thought could represent Hamilton's Scottish roots (his wayward father was from Scotland) and his duel with Burr (you know, smoking guns). But Scotch is notoriously hard to mix in cocktails and the flavors just didn't work. Had to throw that shot away, unfortunately.

My second attempt was a variation on the Last Word, a classic drink with four ingredients in equal parts ("we hold these truths to be self-evident..."). Yeah, Schuyler sisters would've liked this approach. I went with dark rum, apple liqueur (made with New York apples), lemon juice and maraschino liqueur, but I wasn't digging the flavor. I find maraschino liqueur easily overpowers other ingredients (somehow, it works just right in the Last word). So I had to throw this shot away too. Arg!

For round three, I decided to switch approaches. I'd been wedded to the idea of using rum as the base spirit. What if instead I used a split-base with rum and whiskey? The idea of a "split-base" fits Hamilton rather well, as much of the pivotal points of his life were marked by conflict, such as the conflict of the American colonies against the British in the Revolutionary war or the intense conflict between Hamilton and his Federalist supporters against Republicans like Jefferson and Madison during his political career. He dealt with significant personal conflict too, like his desire to be a good family man conflicting with his...other desires (the aforementioned Mrs. Reynolds, for example). And, of course, there's his most famous conflict: the duel with Aaron Burr that led to Hamilton's demise.

Walking through the aisles of a local liquor store, my husband spotted a bottle of Hudson Manhattan Rye Whiskey. Perfect! I grabbed that and a bottle of Caribbean rum (Appleton Estate Signature Blend Jamaican Rum). I decided to ditch apples as the liqueur, switching gears to Drambuie, a spiced honey liqueur from Scotland, and St. Elizabeth's allspice dram, which is also Caribbean-based but, more importantly, the perfect way to represent Hamilton's wife, Eliza. She was a saint after all, standing by his side through financial troubles, family tragedies and his rather unfortunate infidelity, not to mention her efforts after Hamilton's death to preserve his legacy (she made a name for herself as well, working to found New York's first orphanage). To represent Hamilton's, um, reliability with the ladies, there's a bit of Bittermens Burlesque bitters. And of course there's the cherry, for Washington, Hamilton's closest political ally.

I'm not the first person to attempt a Hamilton cocktail. Casey Barber created a great one called "My Shot" for Good. Food. Stories. Her drink uses some of the same ingredients but goes the apple route I decided to abandon, using Laird's Applejack (brandy) as one of its base ingredients and apple cider as the drink's primary ingredient. She even worked Aaron Burr into her drink as apparently there is a cidery named for him. Barber also created a cocktail for the Schuyler sisters.

I'm running out of time, but I want to close by giving a shout out to The Hamilcast, a wonderful podcast that's all about celebrating both the Hamilton book and musical. It's hosted by Gillian Pensavalle and Bianca Soto, working actors who share a love for the Hamilton musical and decided to podcast their way through Ron Chernow's book. It's a great way to stay enthused about the Broadway production while digging deeper into the historical basis of the show.

Now it's time to take a break, talk less and smile more by mixing up this drink. It's perfect for toasting grooms, brides, unions, revolutions...whatever the occasion may call for. It might not turn the world upside down but if you're satisfied with it, that would be enough.

Combine rum, whiskey, Drambuie, Allspice dram and bitters in a cocktail mixing glass with ice. Stir until very cold, then strain into a chilled coupe. Garnish with a cherry.