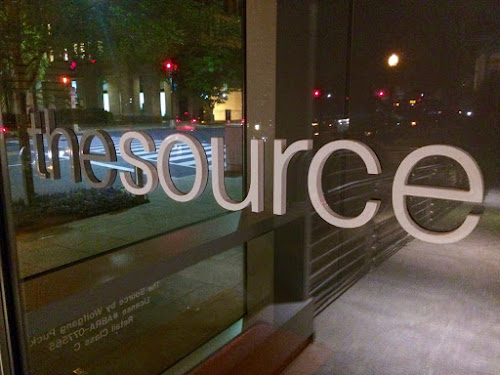 Celebrity chefs are common now. It's easy to forgot that chefs used to simply run kitchens (if you can call that task "simple") without lending their name, face and personality to products, television shows and restaurant empires.

I remember when chefs first started becoming household names, and the name that I remember first learning was Wolfgang Puck. Not surprisingly, it's his mug that illustrates Wikipedia's Celebrity Chef page.

The Austrian immigrant became known for his first Los Angeles-area restaurant, Spago, a showcase for "California" cuisine. I was lucky enough to get to visit Spago in 2000, which was such a thrill for me at the time. Since its opening in 1982, Puck's empire quickly grew, making Asian fusion mainstream with Chinois and offering air travelers a better food option, including his great pizzas, at Wolfgang Puck Express, among his many concepts. His list of restaurants counts over 75 fine- and casual-dining establishments all over the world.

When Puck's The Source opened in 2007, it was a big deal. The restaurant is attached to The Newseum, a media-focused museum that relocated from suburban Arlington, Virginia to downtown Washington, D.C. on Pennsylvania Avenue, America's main street, just blocks away from the U.S. Capitol. At the time, our roster of local celebrity chefs was pretty lean, with José Andrés pretty much cornering that market in a time before Mike Isabella and Aaron Silverman. Chefs from other markets--like David Chang or Daniel Boulud had not yet opened establishments here (Eric Ripert of Le Bernardin opened Westend Bistro around the same time Puck opened The Source, however Ripert is no longer associated with the Bistro). So a celebrity chef of Puck's caliber opening a restaurant in D.C. was a really big deal. Not surprisingly, the restaurant's contemporary Chinese menu--executed then as it is now by Chef Scott Drewno--made headlines.

For whatever reason, we never had dinner at The Source until recently. There were plans from time to time, but they always seemed to fall through. We stopped in for drinks a few times though and were impressed with the cool vibe of the two-story space's modernist, minimalist decor framed by large glass windows (which unfortunately just look at the uninteresting back side of the D.C. Superior Courthouse--you can't have it all).

After last fall's decor and menu revamp, The Source is making headlines once again, having been re-reviewed by the Washington Post's Tom Sietsema and featured for a few months on Eater DC's Heatmap (it has since fallen off). We finally found time to visit The Source for a proper dinner.

Upon entering the restaurant, it didn't look that much different from what I remember. The light fixtures and furniture may have changed, but the space still has a sleek modern vibe. Plenty of smiles greeted us at the host station, and our always friendly server were quick to bring us menus so we could started with a round of drinks. Adios Nonino was our favorite cocktail, a citrusy concoction of bourbon, Aperol and amaretto that hits a nice sweet spot between an Amaretto Sour and a Boulevardier.  As the drinks were being made, our first taste arrived, an amuse of a warm steamed onion roll, a perfect start to a great meal.

For our first course, we split a couple of starters. The Source has long been known for its dumplings, so it's hard to pass up the Selection of Dim Sum, which provides two tastes of four choices: Scallop Siu Mai, Pork Potsticker, Lobster Springroll and Chicken Dumpling. All were good, but of course we had our favorites. The spicy chicken dumpling stood out for its texture and kick. And the pork potsticker is like the classic dumpling available at any Chinese restaurant, except at The Source it's made to perfection, with its chewy wrapper thick enough to avoid it falling apart but thin enough that it recedes behind the meat filling. The lobster springroll, which looks like a little bag of goodies tied with some kind of edible twine (mushrooms, perhaps?) was also quite satisfying.

Want something fresh before diving into the entrees? The Korean pear and kale salad is perfect for this. The vibrant pile of greens is accented with marinated cucumbers, pickled radishes, sweaty-drop peppers, candied walnuts and a crispy slice of lotus root. The Source uses a light touch with its sesame-garlic dressing, all the better for letting the salad flavors really shine. 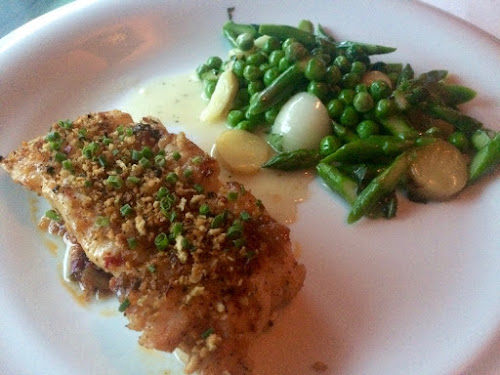 We're not usually seafood guys, but both of us ended up ordering entrees composed mostly or partly of seafood and neither disappointed us. The Nordic cod poached with chili oil was very good--tender, nicely seasoned with a good pepper flavor and not as hot and spicy as its name might imply. The side of lobster fried rice was fantastic--and large enough to share--and the wok-fried spring peas and asparagus were a perfectly seasonal accompaniment. Chris went the "surf-n-turf" route, a split entree of fire-roasted pork belly and littleneck clams. Both were tasty, especially those clams that soaked up all that wonderful smoky bacon flavor.

Normally, we get one dessert and split it, but we must have been in a particularly piggy mood at The Source, because we ordered two desserts. All the better for sampling some pretty great treats. There was a definitely favorite of the two: the 15-Layer Carrot Cake, a sort of carrot version of the Smith Island Cake (Maryland's official state dessert!). The cake is composed of eight very thin layers of carrot cake with cream-cheese frosting between each of those layers, making for a deliciously rich cake. It's topped with candied nuts and creamy ginger ice cream, making for one of the best desserts we've had this year. The cake easily outclassed our other dessert, a banana bread pudding with peanut-caramel ice cream that was satisfying but not as memorable.

There were a couple of niggling issues I'd feel remiss not to mention. One was that the floor under our table was pretty dirty. Chris had to go the restroom to clean off his shoe after stepping in something rather sticky, and when I looked under the table there was an obvious collection of unswept food bits. The second is that the restaurant is really noisy. I know this is a trend in restaurants and I don't always mention it (Espita Mezcaleria was also very noisy, almost uncomfortably so), but it's becoming more a of problem, especially when its difficult to hear your server or your dining companion without shouting.

Those couple issues aside, The Source definitely delivered many more pluses than minuses, offering a  interesting and tasty menu with friendly, attentive service. I'm glad I finally got the scoop on what makes it a newsworthy night out.