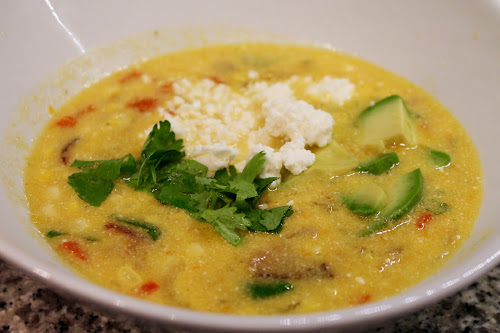 I know I just wrote about Corn-Leek Soup last week, but this Mexican variation on corn soup is just too good to pass up while the sweet corn is still good. This recipe comes from Ingrid Hoffman via Food Network. Hickory-smoked bacon gives it smoky meaty richness, the chipotle chili powder gives it a little kick and the toppings of avocado, cilantro and queso fresco add contrasting freshness.

1. Heat a Dutch oven or large soup soup pot over medium heat. Add bacon and cook until browned and crisped, turning occasionally. Remove bacon and set aside on a paper-towel-lined plate. Remove bacon fat in excess of about 2 tablespoons from the pot (discard excess grease). Add onion, bell pepper and garlic to pot and sauté until softened, about 8 minutes.

2. Cut off the kernels from two ears of corn and combine in a medium bowl with the cherry tomatoes, oregano and 2 cups of chicken broth. Puree mixture with an immersion blender until smooth (alternatively, combine ingredients in a blender and puree until smooth).

3. Add the pureed corn-tomato mixture, the remaining 2 cups of chicken broth and the chipotle chili powder to the pot with the onions. Increase heat and bring to a boil. Cut the corn kernels off the remaining two ears of corn, add the corn to the pot, reduce heat to medium-low and simmer until thickened, about 15-20 minutes.

4. Remove the pot from the heat. Stir in the cooked bacon, sour cream and half the fresh cilantro. Serve in large, shallow bowls topped with a little of the remaining cilantro, diced avocado and crumbled queso fresco.
Posted by Cook In / Dine Out at 12:00 AM