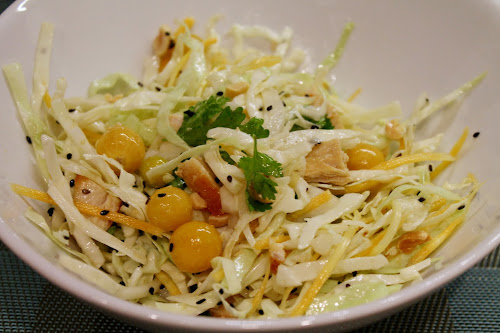 
Along come ground cherries to throw a big ol' monkey wrench in our early education. Cherries? Growing on the ground?! What madness is this?!

Physalis is the genus name for a group of flowering plants, some of which bear edible fruit. Many of the fruit are referred to as ground cherries, and they are also related to the larger tomatillo, which shares the same papery skin. Ground cherries are smaller, resembling golden cherry tomatoes. They don't taste like tomatoes, however. They have a sweet flavor and tart tanginess reminiscent of pineapple.
Because pineapple pairs nicely with Asian flavors such as soy and ginger, I thought these little beauties I picked up at the New Morning Farm farmers market recently would be good in an Asian-inspired slaw. They were delightful actually. If you see some at your market, I hope you pick them up, and please let me know how you use them.

1. Heat 2 tbsp. olive oil in a medium frying pan over medium heat. Add the chicken breasts and sprinkle with garlic powder, salt and red pepper flakes. Pan fry until cooked through, about 10 minutes, turning the chicken breasts over after about 5 minutes. Set aside to cool, then chop into 1/2-inch cubes.

3. Whisk together the dressing ingredients and pour over the slaw. Toss to coat. Serve in large bowls.
Posted by Cook In / Dine Out at 12:00 AM