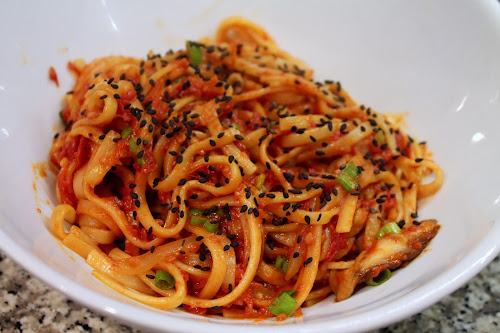 Yaki Udon is a simple Japanese dish of fried udon noodles--those wide Japanese noodles that resemble linguine--usually served with a mixture of meat and vegetables. I thought it could be interesting to develop a version of Yaki Udon that uses tomatoes.

By now, a lot of you have probably heard of the so-called "fifth taste," umami. The term is Japanese and mean roughly "savory." Lots of Japanese dishes are loaded with umami flavor, which comes from foods high in glutamates like mushrooms, seaweed and certain types of fish. Dashi, for example, is a Japanese broth made from dried kombu seaweed and dried fish flakes known as bonito or katsuobushi. Dashi doesn't taste like much by itself, but the glutamate-rich broth is used to enhance the flavor of other ingredients (I've used it to poach salmon, for example). 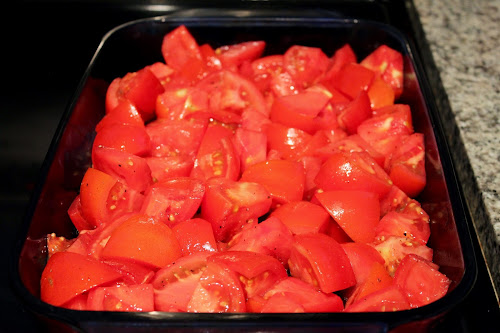 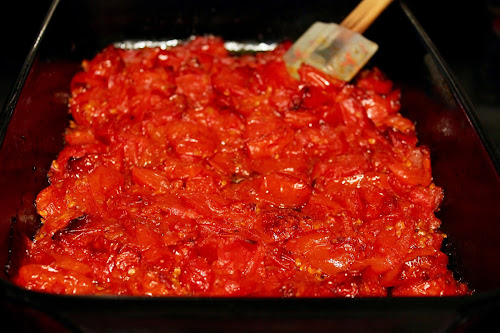 Tomatoes, although not something we commonly associate with Japanese food, are also loaded with glutamates. This isn't so apparent with raw tomatoes, but when roasted, those savory notes really come through. I thought it would be interesting to make Yaki Udon using a roasted tomato sauce. A sort of "Japanese Spaghetti" if you will.

I roasted and pureed fresh tomatoes for this dish and then made a sauce with onions, scallions, garlic and shiitake mushrooms. Although spaghetti is commonly garnished with grated parmesan, I used black sesame seeds. Although it takes awhile to roast the tomatoes, this can be done ahead of time. Otherwise, the dish comes together quite quickly. 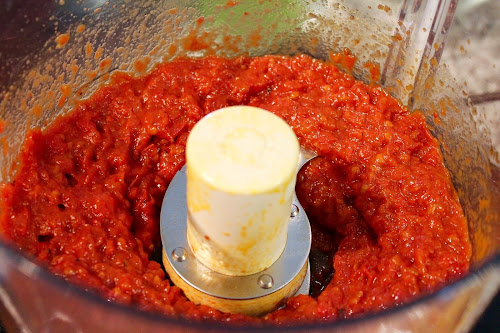 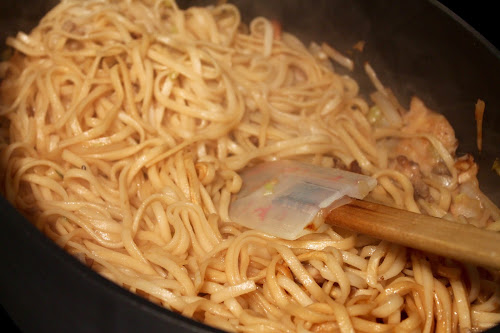 1. Preheat oven to 350 F. Combine tomatoes, 2 tbsp. vegetable oil and sea salt in a large bowl and toss to combine. Spread the tomatoes in an even layer in a 9 X 13 baking dish. Roast the tomatoes, stirring every 30 minutes, until the tomatoes have shriveled, browned a little around the edges and significantly reduced in volume, about 3 to 3 1/2 hours. Set aside to cool. Transfer tomatoes and any remaining juices to a food processor and pulse 5 to 6 times to make a chunky sauce. Store sauce in the refrigerator until ready to use.

2. Bring a large pot of water to boil. Add the udon noodles and cook until the noodles are al dente, about 4-6 minutes (may vary by noodle brand, consult package directions). Drain noodles and set aside.

3. Heat remaining 2 tbsp. of oil in a large sauté pan over medium-high heat. Add onion and sauté until softened, about 2 minutes. Add the white and light green chopped scallions and the garlic and cook for about 1 minute, stirring frequently. Add the mushrooms and sauté until tender and their water has evaporated, about 4 minutes.

5. Serve the noodles in bowls topped with a sprinkle of black sesame seeds.