D.C. summers are rarely pleasant. It's hot. It's humid. Short thunderstorms punctuate the sauna-like environment, promising to clear away the mugginess only to often up the moisture as the heat quickly evaporates the water--I've seen it pour and then the street is almost completely dry within an hour or two, filling the air with steam. This is swamp-life at its sticky best.

The lucky can escape to sunny but less humid vacation spots. The rest of us take solace in another form of escape: we pig out on the insanely good food that the summer harvest brings.

Italian cuisine is optimally suited for summer. Its love affair with the tomato is well-known, but Italian food is also good for sweet corn, greens of all kinds and fresh herbs. Accented with olive oil, world-class cheeses and a nice glass of Italian wine or an amaro-based cocktail, and you have the makings for a superlative summer dinner.

And that's exactly what we got at Ghibellina, a shining star among the constellation of restaurants that have recently made 14th Street NW their home. When I moved to D.C. 16 years ago, 14th Street had nothing of consequence on it. Today, a seemingly endless parade of eateries and shops have solidified the street as one of the city's top destination strips.

Ghibellina is named for Via Ghibellina, a street in Florence, Italy, where the restaurant's co-owners Ari Gejdenson and Ralph Lee once lived. The long, narrow street stretches from its western end where Gusto Leo, a trattoria/pizzeria makes its home, to Viale della Giovine Italia, a main thoroughfare on its eastern end. Thus, spatially, Ghibellina the restaurant is a good match for its namesake street: the narrow brick-walled restaurant stretches from its rear kitchen--dominated by a wood-fired pizza oven--to the bustle of its 14th Street patio. I traveled through Florence when I was a college student, and I remember it as my favorite place in Italy. It's easy to see why Gejdenson and Lee would be inspired by it.

Coming in from the D.C. heat means a cocktail is definitely in order. Ghibelline's summer cocktail lineup boasts a lot of quality ingredients and refreshing fruit flavors. I opted for the Papino, made with rum, maraschino liqueur, grapefruit and bitters. Chris chose the Giappone, a tart but refreshing blend of rye, dry vermouth, lemon and cherry-ginger shrub. 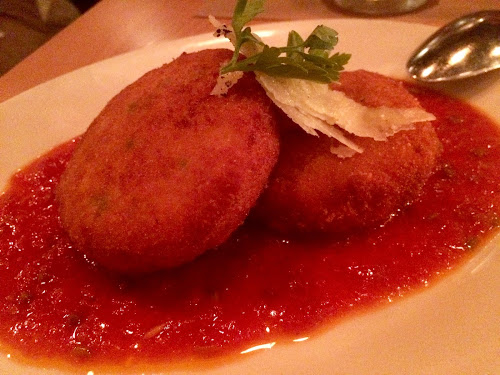 Ghibellina's Tuscan inspiration has been molded into a menu that will look familiar to D.C. diners, divided as it is into antipasti (starters), zuppa (soup), insalate (salad), pasta, secondi (entrees), contorni (sides) and pizza. When I told the waitress we wanted to order a selection from most of those groupings and share them, she replied that was an ideal way to experience Ghibellina.

For our starter antipasto, we chose riso al salto, fried risotto cakes with a crispy exterior and warm, creamy risotto center. The satisfying cakes are served with a tomato sauce spiced with coriander and topped with a few shavings of cheese. Our starter salad, the Ghibellina, was also very good. I loved the combination of arugula, pine nuts and roasted cherry tomatoes with emmenthaler--the Swiss cheese best-known as a fondue ingredient--and avocado, something I don't see much on Italian menus, but it was perfect. 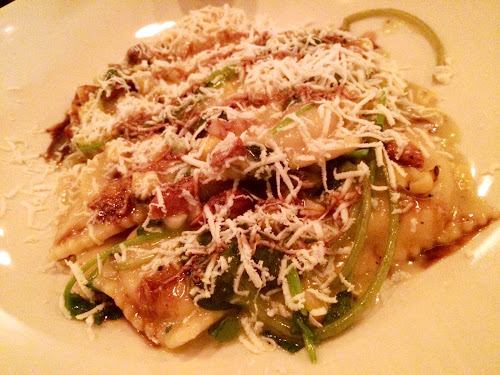 As good as our starters were, our pasta and pizza selections were even better. It's hard to say which was our favorite. The ravioli di mais dolci (corn ravioli) gives Graffiato's corn agnolotti a run for its money in the contest for D.C.'s best summer corn-stuff pasta dish. I loved the toasted almonds that adorned the corn-and-ricotta-filled ravioli. The pizza was also delicious. We had the Finocchiona, which is topped with shaved fennel, spicy salami, tomato sauce and mozzarella and pecorino romano cheeses. Ghibellina serves its pies with pizza scissors, which makes cutting them into wedges easy (fun too). Here's a video with Ghibellina Chef Jonathan Copeland on why they serve their pizza with scissors. Copeland boasts an impressive resume, including stints at Palena and Society Fair locally and in The Spotted Pig and Franny's in New York. Clearly, Copeland knows Italian cooking well. 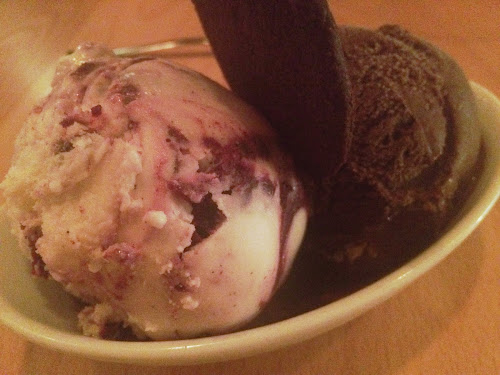 Ghibellina has an enticing dessert menu, but the hot day put is in the mood for its coldest option: a mix-and-match duo of gelato and/or sorbetto. We chose a vanilla/blueberry gelato and a dark chocolate sorbetto, both of which were excellent and hit the spot.

Of course, eventually our virtual trip to a little street in Florence had to come to an end, and back into the humid D.C. summer we went. However, this time we had the good memories of a wonderful dinner. It may have been miserable outside, but inside Ghibellina, we couldn't have been happier.