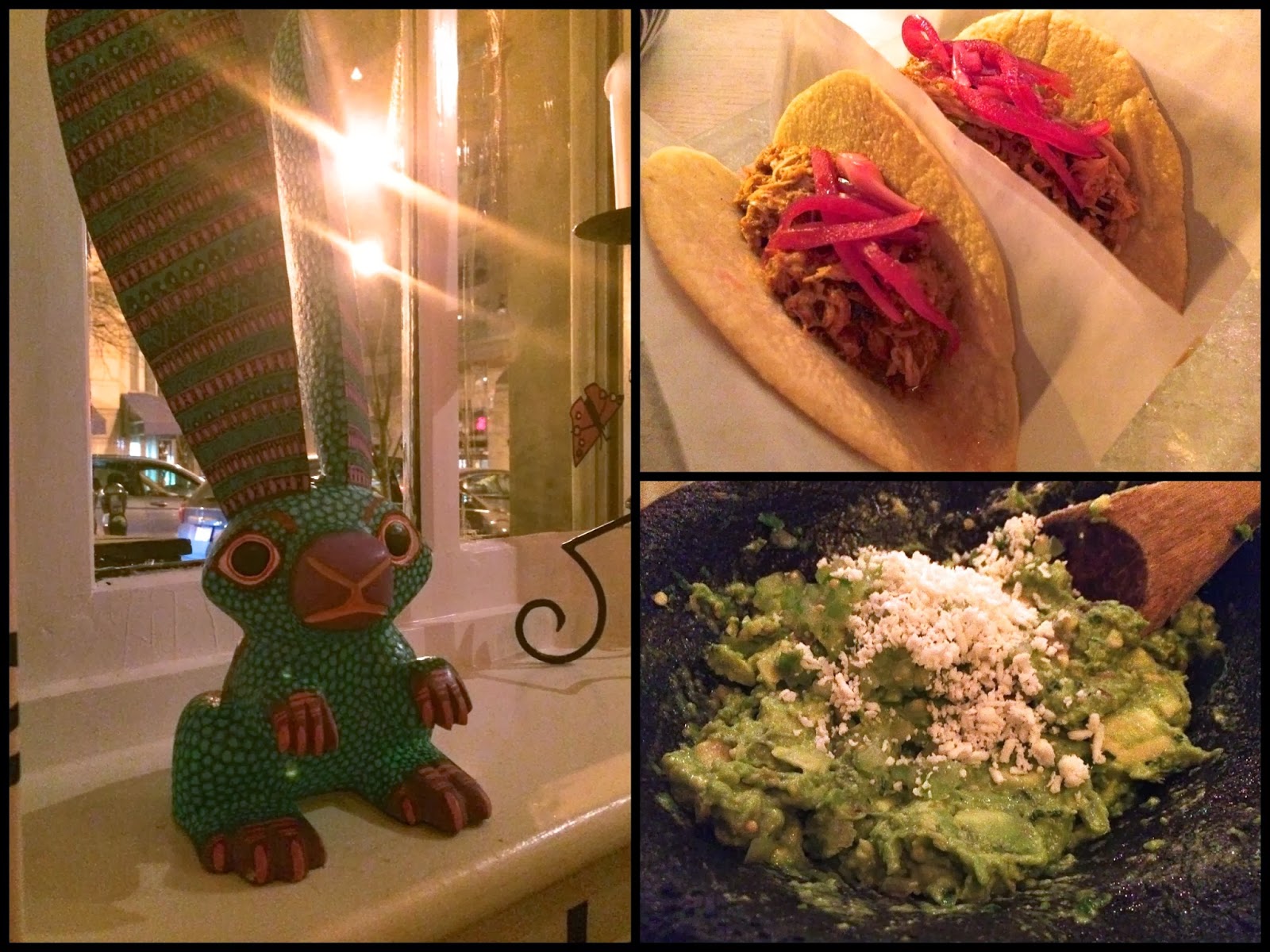 Last year, I wrote about Jaleo as it celebrated its first 20 years. This year, another José Andrés restaurant reaches a milestone, as Oyamel, his Mexican restaurant, turns 10. The newly expanded space is decked out and ready to celebrate.

Initially, I was unimpressed with Oyamel. It opened in 2004 in Crystal City and we paid it a visit around that time. I thought the tacos were too small and the tres leches cake too dry. These were the days when I was so into Tex-Mex that if my Mexican food wasn't oversized and draped in cheese I wasn't interested. We were huge fans of our neighborhood Alero in Cleveland Park (which we've lately rediscovered is a great place for Sunday afternoon fajitas and margaritas). I just didn't get the small plate concept translated to Mexican.

Later, after its move downtown, I gave Oyamel a second chance and grew to really love it. Now I count it among my favorite Mexican restaurants. It's menu offers a great balance between favorite dishes that are always available and seasonal specials. I recommend aiming for a mix of both.

Dinner must start with table-side guacamole (pictured at top), which is sort of a cliché, but theirs is so good I look past that. It's classic but interesting too, made with green tomatillo, a nice squeeze of lime juice and a crumble of queso fresco. The chips are also quite satisfying, crisp and salty as they arrive with a smoky-spicy salsa. Run out of chips? They promptly bring more.


Of course, a good margarita is just the ticket to wash down that guacamole. The classic made with tequila blanco, triple sec and lime is tart and refreshing. For something a little different, the Oyamel carries its salt suspended in a foamy "salt air" instead of on the glass's rim. On a recent night, I opted for the margarita daily special and loved it: smoky mezcal with triple sec, apple, cinnamon and lime. The smoky-tart flavor of the mezcal with the apple and lime was something I'd love to try to replicate.


Like Andrés' other Penn Quarter pillars, Jaleo and Zaytinya, Oyamel's menu is dominated by small plates. I'd generally recommend five or six for table of two. On a recent evening, our favorite was the seasonal Acelgas con nuez de Castilla, which was sauteed Swiss chard with cabbage, shallots, toasted hazelnuts and raisins served over a spiced apricot puree. The combination of the greens, shallots, roasted nuts and sweet raisins was marvelous. Also good that night was Chile en nogada, a poblano pepper stuffed with ground pork, pine nuts and apples topped with a creamy sauce of goat cheese and walnuts and a sprinkle of pomegranate seeds. A lot of the dishes at Oyamel are spicy, but this was one comparatively mild and nicely balanced. Another good vegetable dish was the Brussels sprouts with chile de arbol sauce, pumpkin seed and peanuts, although they weren't really "crispy" as advertised on the menu.

Tacos are ordered individually, and as I mentioned abovce are fairly small, so they don't share well. So if you see one that interests your party, I recommend ordering at least one each. We enjoyed the Cochinita pibil con cebolla en escabeche (pictured at top), which is pit-barbecued pork flavored with Mexican sour orange and served with pickled red onion. Not the best taco I've had there, but definitely serviceable. I like that the taco offerings rotate, so you'll never see the same selection. Years ago I remember having a really good mushroom and corn taco.


A favorite we always order are the papas al mole, basically French fries in a spicy mole poblano sauce topped with Mexican cream and queso fresco. It's like a Mexican version of fries with gravy and I always want some whenever we go to Oyamel.

Service at Oyamel is efficient. Sometimes too much so. If you're hoping to swip a chip through a little bit of sauce left on a plate after the main morsels have been devoured, be sure to protect it from the roving bussers, who will snatch it away if you're not looking. Food comes out quickly here too, although they generally pace it so that "starter" type tapas arrive before the heavier meaty ones.

I'm always surprised when Jaleo and Zaytinya make best DC restaurant lists but Oyamel, for whatever reason, gets fewer accolaides. You wouldn't know it from the crowd assembled near the front door waiting for a table. Despite the recent expansion that added another dining room and doubled the bar, there appears to still be a wait for tables (so I definitely recommend a reservation). Ten years in and Oyamel remains as hot as ever. In fact, the night we were there last, we just missed dining with DC's two biggest VIPs: the President and Mrs. Obama came in for dinner just minutes after we'd left.