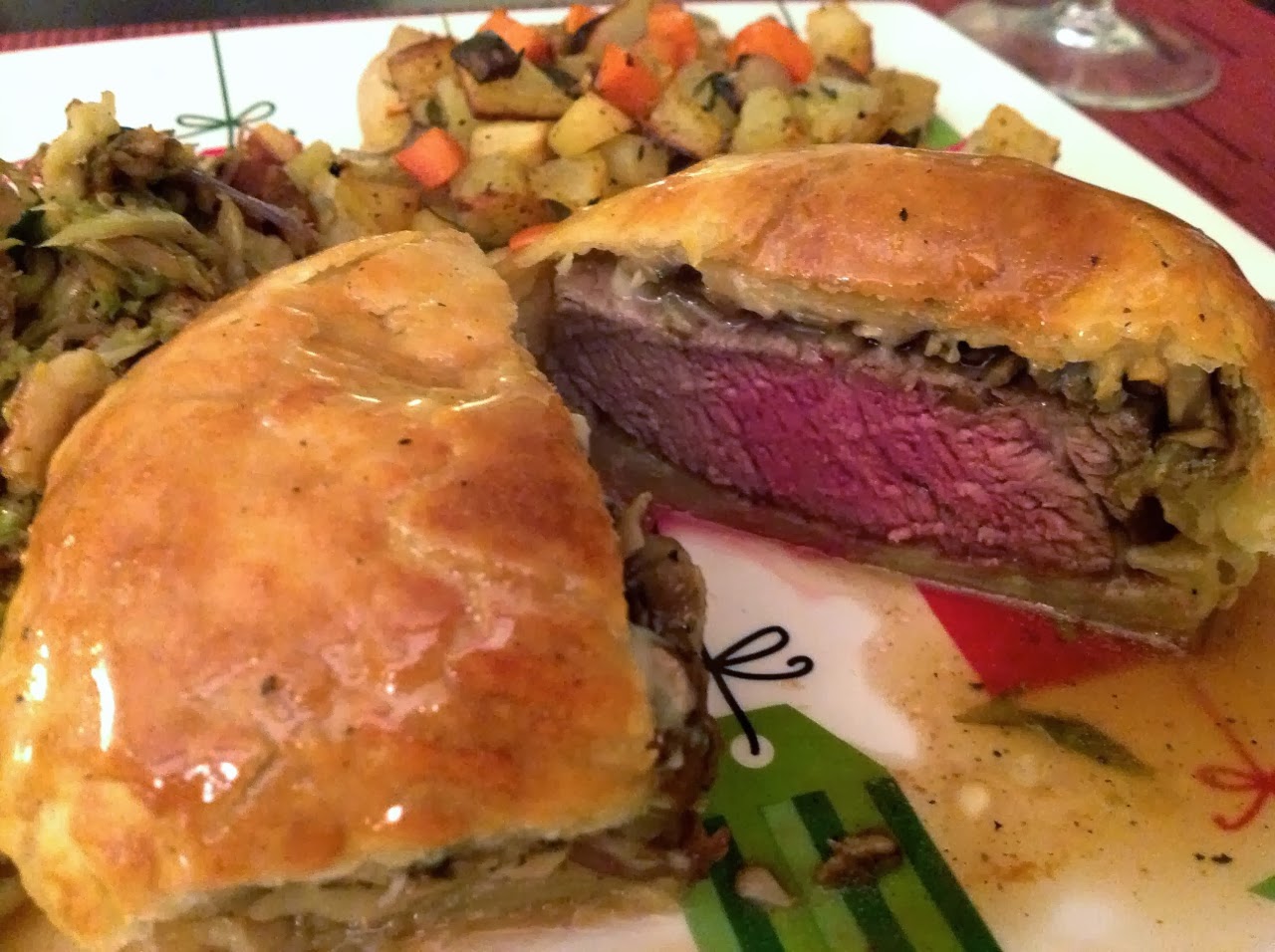 For a long time, Beef Wellington was a dish that I'd heard of but never had and didn't really know what it was. All I knew was that it was something fancy, possibly difficult to make.

Years ago, I decided to find out what it was. It's been a Christmas staple ever since. 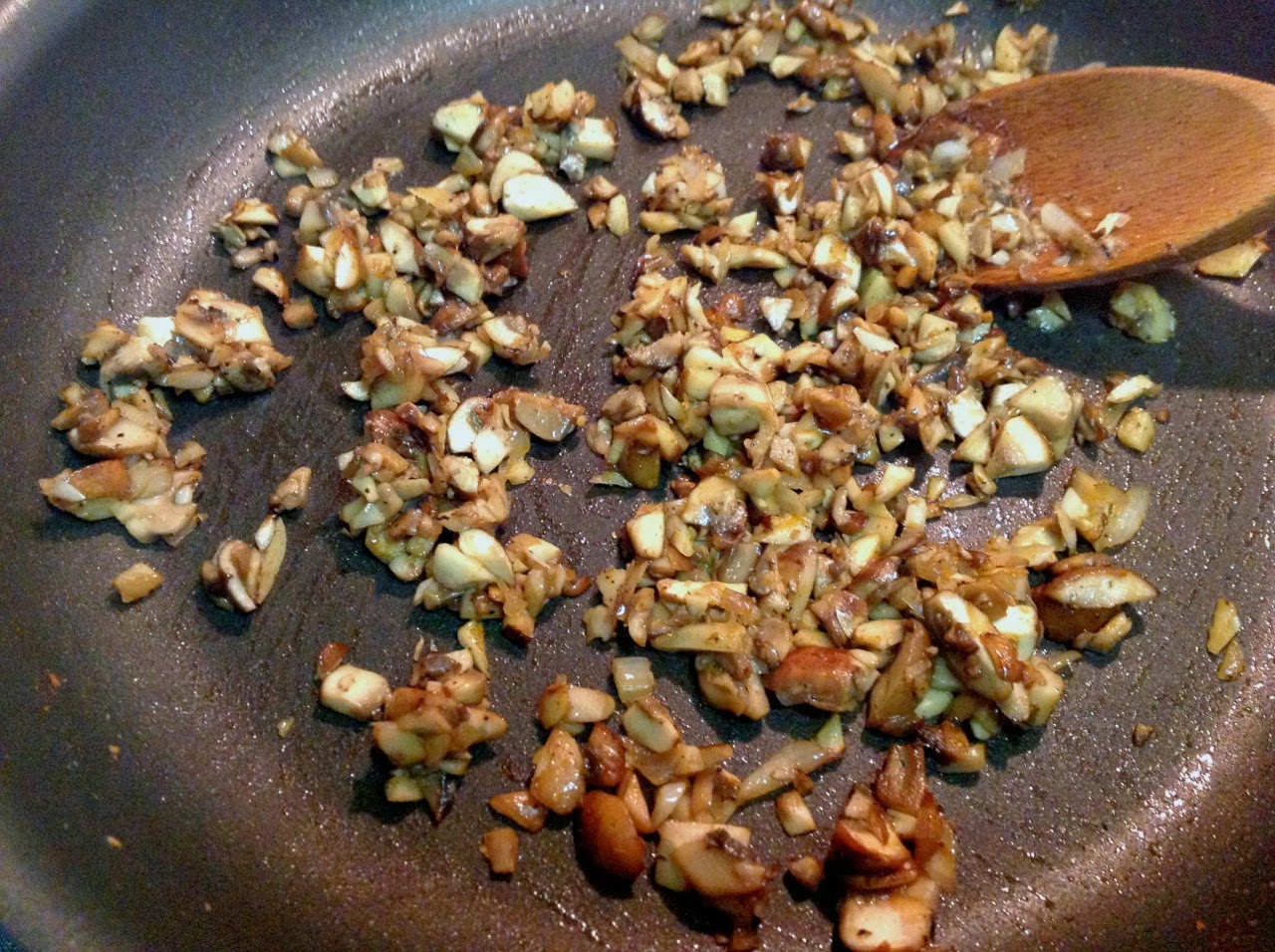 Beef Wellington is a roasted filet mignon with pate, mushrooms and herbs wrapped and baked in puff pastry. It's origins are disputed. Forklore pegs the dish to a 19th Century Duke of Wellington, Arthur Wellesley. However, written evidence of the dish first appears in the United States in the 20th Century, and there's even a claim that it's from New Zealand. 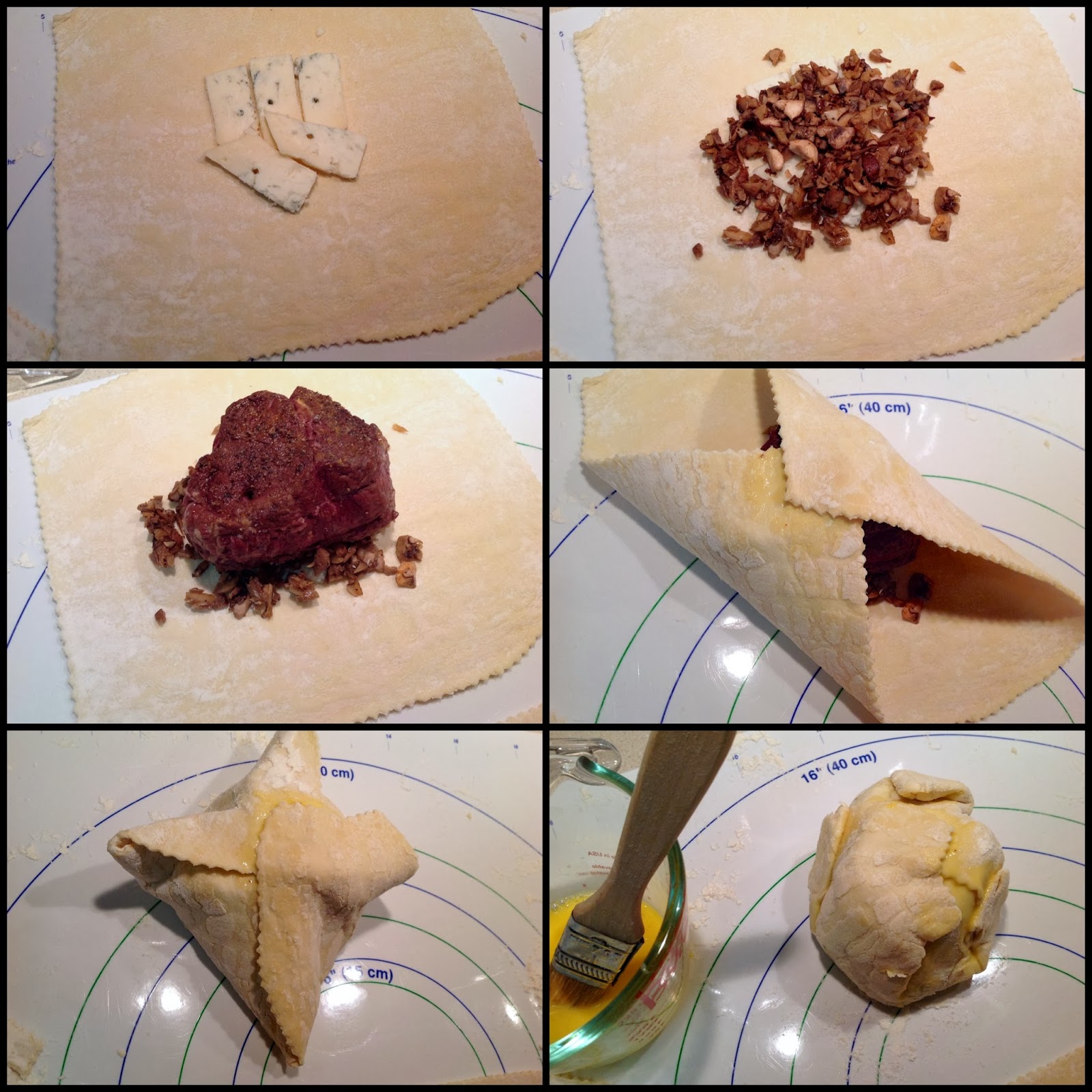 The version I make is adapted from a 1998 recipe that appeared in Gourmet magazine. It substitutes gorgonzola cheese for the pate, which works wonderfully with the mushroom-shallot mixture and the beef. 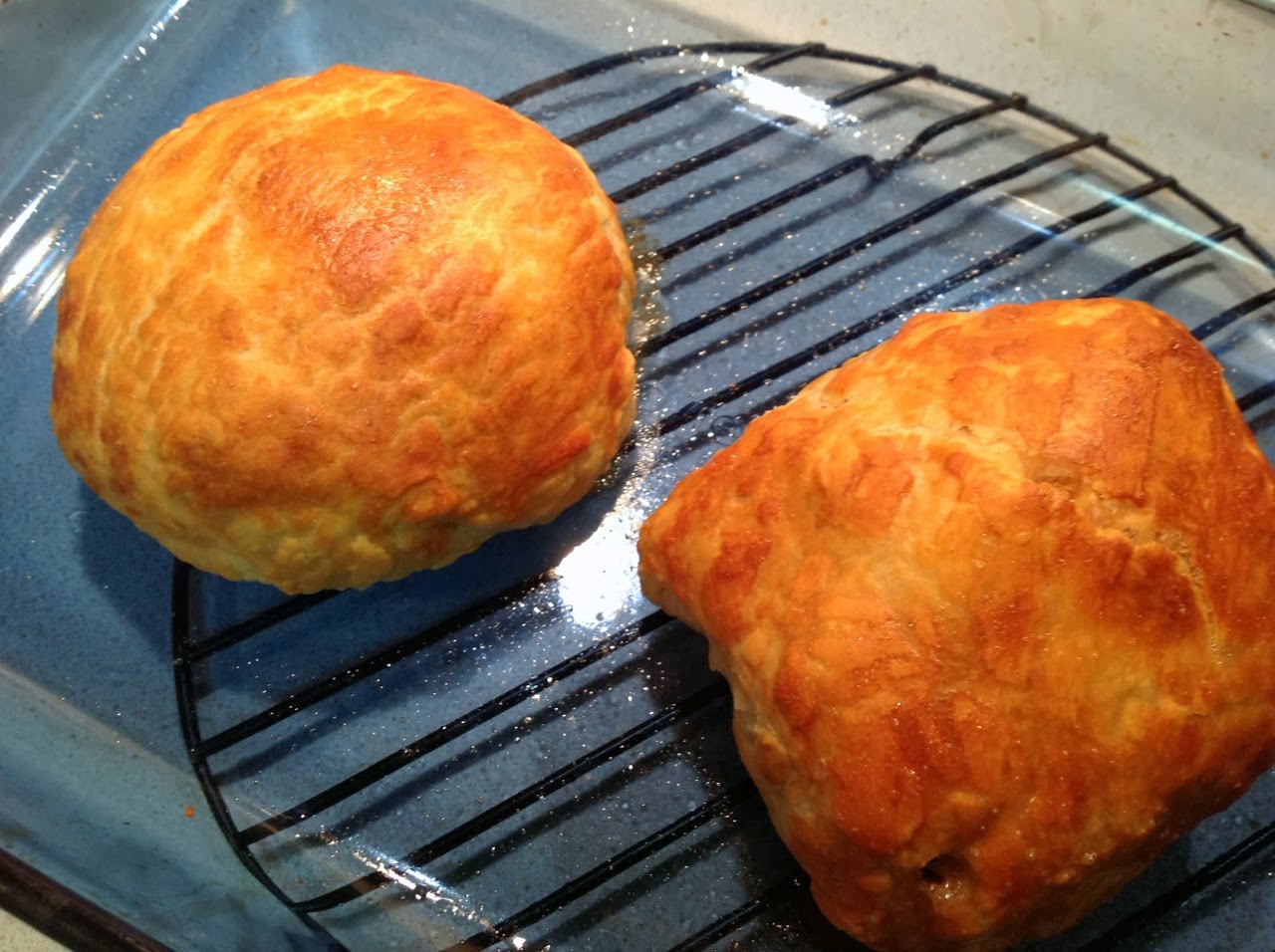 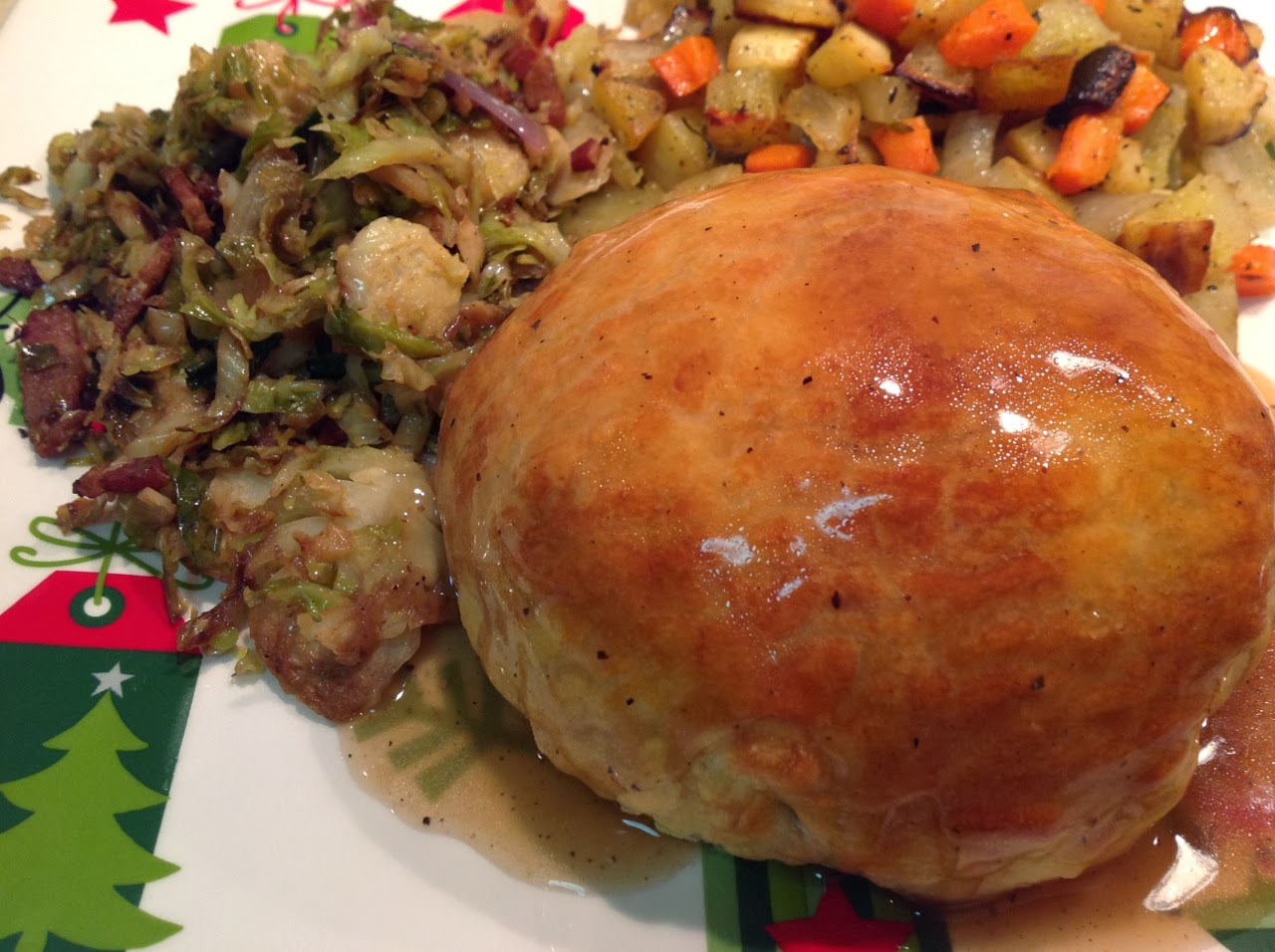 Beef Wellington with Gorgonzola Cheese
Adapted from a recipe by Gourmet, courtesy of Epicurious

1. Preheat oven to 425 F. Spray a 9 X 13 baking dish with olive oil. Pat the filets dry with paper towels and season with salt and pepper. Place in the baking dish and roast for about 15 minutes or until an instant-read thermometer reaches 120 to 130 degrees (note: the original recipe says to roast for 12 minutes until a temperature of 110 is reached, but I prefer the meat to be more medium-rare to medium than rare as the recipe calls for). Allow to cool.

2. Meanwhile, heat butter in a medium frying pan over medium heat. Add mushrooms, shallots, garlic and herbs and sauté until softened and lightly browned, about 8 minutes. Season to taste with salt and pepper.

3. Place puff pastry sheet on a floured work surface. Roll sheet out to make a 14-inch square, then cut into fourths (you'll only need half of the sheet if making two servings).

3. Place 1 tbsp. of the crumbled gorgonzola cheese in the middle of the pastry square. Top with half of the mushroom mixture. Place a partially cooked filet on top of the mushrooms. Fold the corners of the pastry together, brushing the point where the corners connect with egg to seal. Brush the seams with egg and press together to seal. Seal any gaps and press the pastry around the filet to enclose completely. Place prepared pastries in a 9 X 13 baking sheet sprayed with olive oil, brush all over with egg and refrigerate at least 1 hour up to 1 day until ready to bake.

4. Preheat oven to 425 F. Bake for 20-25 minutes until the pastry is golden. Serve immediately topped with a savory beef madeira sauce (see below).

The original recipe calls for a sauce made of 1 cup of beef or veal demiglace and 2 tbsp. madeira boiled for a minute to thicken them. Since I can never seem to find demiglace, instead I boiled 2 cups of beef broth until it was reduced to about 1/2 cup, added 2 tbsp. madeira, boiled for another minute. Reduced heat to medium-low and added 2 tsp. of arrowroot powder dissolved in 1 tbsp. of water to thicken. Season with salt and pepper.
Posted by Cook In / Dine Out at 12:00 AM