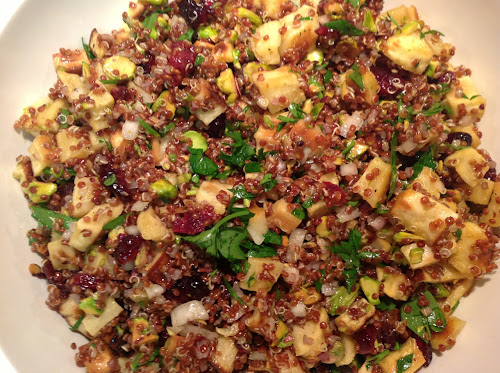 Quinoa is all the rage these days, but it's not universally loved, as The Washington Post recently wrote about. I'll admit to finding the healthful grain a bit dull sometimes, but I was determined to find a way to make it shine for Thanksgiving dinner.

The flavor of quinoa ranges from almost nothing to a bit bitter. It's biggest selling point is its texture: adding a bit of crunch. To play off its strengths and make up for its weaknesses I wanted a dish where its blandness would be outweighed by richer savory and sweet flavors, but its texture would provide a welcome counterpoint.

I hit on parsnips as the perfect vegetable counterpoint. Although far less popular than its root vegetables cousins the potato and the carrot, parsnips can hold their own even in a dessert. Let's be honest: they're awful raw, but roasted until they start to brown and they develop a nice toasty sweetness. Playing up the sweet and the crunch, I also tossed in dried cranberries and chopped pistachios. To pull the flavors together with something sharp, I created a lemon-shallot vinaigrette.

This dish is attractive and tasty and, as a cool dish, lends some nice variety to meal dominated by hot sides.

1. Preheat oven to 400 F. Spread parsnips on a baking sheet. Toss with olive oil and seasoned salt and roast until the parsnips are cooked through and browned on some sides, about 30 to 40 minutes (stir with a spatula halfway through). Allow to cool.