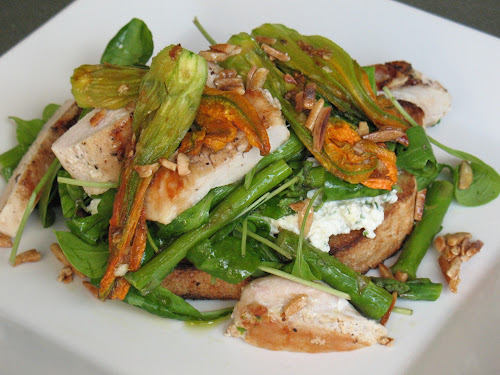 This dish has an awful lot going on, owing to the fact that I had the rather mad idea to combine two dishes into one. I guess that makes this a "mash up."

It came about because as I started making dinner one night, I discovered that I'd completely forgotten about the squash blossoms I'd picked up at the market. I'd planned to use them in a tartine with homemade herbed ricotta. So rather than let it go to waste, I decided to incorporate it into another dish I'd planned to make using the ricotta: an arugula-asparagus salad with chicken and honey-cinnamon almonds.


Miraculously, the combination it worked pretty well. The ricotta-slathered toast served as the anchor of the dish, upon which I built the salad topped with the sautéed squash blossoms and a sprinkle of the almonds.


This was my first time using squash blossoms. A lot of the recipes I read called for stuffing them with cheese and deep frying them. They are so delicate though; I could see trying to stuff them without breaking them being a real hassle. Maybe I can try that later, but for now it worked great to just sauté them with some garlic. To prep them, carefully open the blossoms, remove the stamen--the pollen-covered nub in the middle (and try to not think about how that's basically plant castration), remove any pointy dark leaves at the base of the blossom, and gently rinse.


Note: The homemade ricotta I made was rather thick. To make it more spreadable, I added a couple tablespoons of milk and mixed it in with the herbs.


1. Heat 1 tbsp. olive oil in a medium pan over medium heat. Sauté chicken breasts until cooked through, about 10 minutes, flipping halfway and seasoned with salt and fresh-ground black pepper. Set aside until cooled and then slice.


2. Heat a small frying pan over medium-low heat. Add the slivered almonds and cook until browned, stirring frequently to prevent burning. Add cinnamon and honey and stir to coat evenly. Set aside to cool.


3. Turn on the oven broiler. Spray asparagus with olive oil spray and season with sea salt. Broil for 7 minutes until tender. Cut the stalks in half or smaller.


4. Spray both sides of two pieces of crusty Italian bread with olive oil and broil until lightly browned.


5. In a small bowl, use a fork to mix the ricotta, pepper and chopped parsley, adding a little milk if needed to smooth out the mixture.


6. Put the arugula in a salad bowl. Whisk together the extra-virgin olive oil and red wine vinegar. Toss with the arugula.


7. In a medium pan, heat 1 tbsp. olive oil over medium heat. Add garlic and sauté by itself briefly until fragrant. Add cleaned squash blossoms and sauté gently for a few minutes until the base of the blossom is tender.


8. To assemble the dish, put the toast on a plate, spread half the ricotta mixture on top, a handful of dressed arugula, half the asparagus, half the chicken, half the squash blossoms and then sprinkle with candied nuts.
Posted by Cook In / Dine Out at 7:44 AM