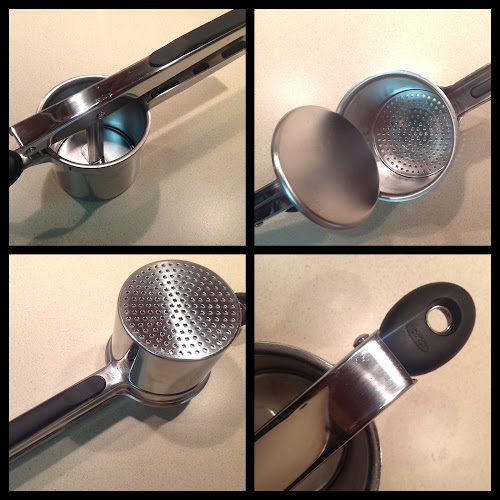 A potato ricer is not an essential kitchen tool, but for some jobs, it's pretty darn useful. Sure, you can mash potatoes with the aptly named potato masher (or a food processor, but I wouldn't recommend it), and you can wring moisture from raw shredded potatoes with towels (but it makes a mess). But for certain tasks, a potato ricer will accomplish the job more efficiently with better results.

The key advantage for using a potato ricer to mash potatoes texture. It doesn't over-mash like a food processor and achieves more consistent texture than mashing with a utensil, since the potato is extruded through the device's mesh base. A nice side benefit is that potato skins don't pass through the holes. So you can skip peeling potatoes. Just put half a potato cut-side down in the bowl of the ricer and by applying leverage with the other handle, it squeezes out the potato and the skin stays in the bowl (if this sounds miraculous, I've tried it many times and it works without fail).

The potato ricer produces mashed potato of optimal texture for making gnocchi dough, which is the purpose for which I acquired mine. The other useful purpose is wringing water from raw potato shreds for hash browns. The key to crispy, browned hashbrowns is removing as much water from the raw potato as possible. Blotting and squeezing with towels will do this, but it makes a big mess. Raw potato is too hard to be extruded through the holes, so squeezing small batches of raw potato shreds in a ricer is a great way to remove moisture.

The ricer looks like an oversize garlic press. Mine is Oxo brand ($24.99 at Amazon). Some models have interchangeable discs for different textures; so far the single texture mine produces has been just fine. America's Test Kitchen has rated several brand.
Posted by Cook In / Dine Out at 4:39 PM

Email ThisBlogThis!Share to TwitterShare to FacebookShare to Pinterest
Labels: equipment