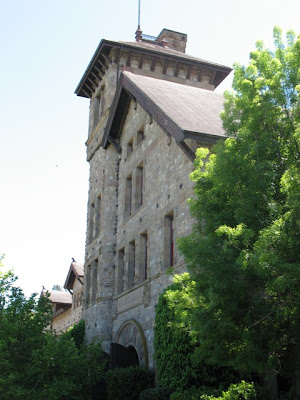 It's Olive Oil Week at Cook In / Dine Out. This week, I'm going to take an in-depth look at one of the most important ingredients in the western culinary tradition, particularly for Mediterranean cuisine.

America's appetite for olive oil has increased dramatically in recent years, with consumption in 2011 having tripled from that of 20 years ago, according to the International Olive Council (IOC). What may have once been considered an exotic import is now an everyday item in the grocery store.

And it's not all imports. Domestic production of olive oil, although a very small slice of global oil production, has tripled in the last 4 years and IOC expects it to double again this year.

My early experience with olive oil dates baco to the '90s when I began cooking. Olive oil was new to me then and was a common ingredient in the Sheila Lukins and Julee Rosso recipes I was making, such as black bean soup, mediterranean chicken salad and chicken fajitas. I remember buying little bottle of Pompeiian brand olive oil and there being little selection in the grocery story.

Although I've cooked with olive pretty continuously since then, my eyes were opened even wider during a trip to Napa last year when I was exposed to the burgeoning domestic olive oil production of northern California. Although we were in wine country, it might as well have been olive country, as there was a palpable excitement about olive oil. Our lunch at the Culinary Institute of America featured olive oil prominently in every course, even dessert (olive oil cake). One of the wineries we visited, Lava Vine, also produces olive oil, which we got to sample poured over some samples of dark chocolate. I'd intended the trip to be a culinary experience, but I didn't expect olive oil was going to be such a big part of it.

(Pictured above: The Culinary Institute of America at Greystone, the CIA's Napa Valley campus, which features an oleoteca--an olive oil bar for sampling oils in the school's gift shop.)
Posted by Cook In / Dine Out at 7:28 PM