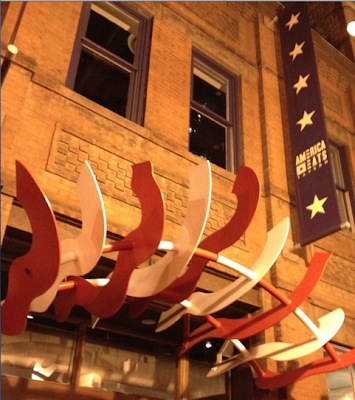 When José Andrés announced he was opening temporary restaurant America Eats to dovetail with the National Archives' exhibit on the history of U.S. government and food, it meant shutting down one of his Penn Quarter pillars. Turns out though that the real loss in this exercise will be America Eats itself.
Since opening last July 4, America Eats has excelled at reinterpreting historical American dishes with modernist flair. That means taking some of the techniques from corner Minibar--deconstruction, foams, even molecular gastronomy--and translating them to the larger main dining space. The menu, which focuses more on describing the dishes' historical origins than how its being served, means you're often in for a surprise.
Deconstruction, in particular, is everywhere. Soups come out with their braised, roasted and chopped solid ingredients composed like a still life in their bowls, before the server pours the broth over them at table. Thus my chestnut soup arrived with cooked vegetables composed around its silky, chilled foie gras center all of which were then coated in a warm, savory broth. Cold peanut soup arrives with its roasted peanuts and microgreens awaiting a pour of cool, creamy broth.
The best deconstruction on the menu has to be the Eisenhower Stew, a perfectly cooked piece of beef served with tender root vegetables sitting atop a velvety brown sauce. It's so good, we ordered it twice. Also good is the BBQ beef short ribs with Hoppin' John, another perfectly cooked piece of tender beef with assertive smoke flavor and a little spice. It's served with a historical (yet surprisingly trendy) side of black eyed peas with rice. Less delicious, but still interesting was the cornmeal-crusted croaker with succotash, which was bland compared to the other dishes. It is no longer on the menu, as the restaurant has changed its offerings with the seasons.
Salads provide fresh balance to the meat and seafood heavy entrees. A Harvard beet salad comes with a mix of deeply red beets, half roasted and half shredded. The Waldorf salad is tasty, although takes the modernism a bit far by compressing apples with "celery essence" rather than just including celery. I'm not even sure what compressing an apple would involve, for that matter.
The bread basket, easily skipped at other restaurants, is worth getting here, heaped with fresh hot buttermilk biscuits served with a mixture of butter and blackberry jam. And then there's those hush puppies. Mmmm. They come with a special butter too, this one blended with sorghum for added sweetness.
America Eats was never meant to be permanent, but in the last 7 months, it has distinguished itself as the most creative of Andres' four moderately price downtown establishments. Already extended from its originally planned closing this month, America Eats is due to go dark on July 4, 2012, at which time the space will be renovated to expand his restaurant-within-a-restaurant Minibar from 6 seats to 18 and use the rest of the space as the corporate offices of his business, Think Food Group. When Cafe Atlantico was first closed, there was talk it would reappear elsewhere (it has not). I hope there's talk of keeping this around somehow. I'd love to see a continuing revolving menu of modern takes on historic dishes--seems like an endless supply of inspiration meets innovation.
Posted by Cook In / Dine Out at 7:58 AM