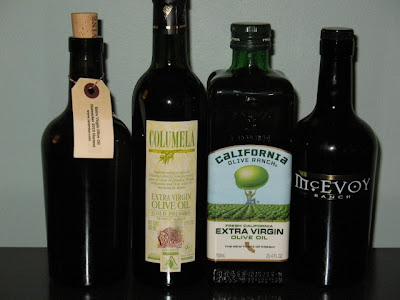 Reading about extra-virgin olive oil lately has given me a greater appreciation for its flavor. I hadn't really thought about the fact that different oils are made with different types of olives and that different blends could yield dramatically different flavors.
Good extra-virgin olive oil presents a balance of three flavors: fruity, bitter and peppery, with the last being expressed mostly at the finish. Yet the specific character of the oil's flavor can vary depending on the year and the type of olive (or olives) it contains. In that, it's not dissimilar from wine. Perhaps it's not a coincidence that olives grow well in many of the same areas where grapes do.
Serious tasters sample olive oil in tulip glasses tinted blue to remove any prejudice from oil's color. Very fresh olive oil will be green, but just because it's turned its usual golden color doesn't mean it's spoiled. Of course, I just used a teaspoon, so I saw what color they were, which was mostly golden with a slight green hue except for the grocery store brand, which was browner.
The Contenders
I decided I needed to conduct my own tasting. On hand were two olive oils:
California Olive Ranch (everyday oil). This is what I've been using as my everyday go-to oil. I started buying it after reading the UC Davis study comparing California oils to European imports. California Olive Ranch produces high quality extra-virgin olive oil at a fraction of the price you'd pay for other brands, due to their high-density planting technique and mechanical harvesting. In fact, my local grocery store recently started selling their 750 ml bottle for $9, which makes them competitive with the major Italian brands. In addition to this product, which I assume is a blend, the company sells higher-priced specialty olive oils, including single-varietal offerings of Arbequina (which I use for salads at work) and Arbosana. In a recent test of California oils, America's Test Kitchen rated their Arbequina just below their favorite oil, Columela from Spain.
Lava Vine. Lava Vine is a small winery near Calistoga in Napa Valley. Some other time I'll tell you about the wonderful time I had tasting wines there. One of the coolest things about having this oil on hand is that Lava Vine is a small operation, so my tasting there was done by the guy who makes it. He poured it over a piece of dark chocolate with a sprinkle of salt. So good.
To round out a good test, I decided to add three more oils:
McEvoy Ranch. The idea that California could one day produce enough olive oil to replace many imports in grocery stores is very appealing. Much has been written about the benefits of buying food produced closer to home--it's cheaper, better for the environment and fresher, so it tastes better too. There's no reason not to extend this thinking to olive oil. I came across McEvoy Ranch by luck. One morning after I'd reviewed the UC Davis oil study (which features McEvoy Ranch), I just happened to go into Cowgirl Creamery, which sells McEvoy Ranch oil from a large vat to protect its freshness. Score! Their oil is a blend of six Italian olive varietals: Frantoio, Leccino, Pendolino, Maurino, Leccio del Corno and Coratina.
Columela. This Spanish oil remains America's Test Kitchen's favorite. It is a blend of Hojiblanca, Picual, Arbequina and Ocal olives. It is distributed by Anfora Quality Products and I found it in my local grocery store.
Grocery Store Brand. To have a "control" so to speak against all these supposedly high-class oils, I decided to ground the study by getting what for most consumers would be the most basic extra-virgin oil available: the store brand. Having read Extra Virginity, right away I'm suspicious. Since I know my grocery store doesn't make olive oil, they've certainly had to purchase this from a supplier of some sort. It claims to be a product of Italy, Spain, Tunisia, Turkey and Argentina, although I wonder if that means it could be from any of them, rather than a blend of all of them. Also, unlike all the other choices, it comes in a clear bottle, and since light damages olive oil, this is also suspect.
The Results
Although I wanted to pick a favorite, I find I cannot, because four of them are really good and all a bit different.
Least favorite - Grocery store brand. This one's easy: the grocery store brand. It really is inferior. Compared to the others, it has noticeably less flavor with just slight bitter and peppery flavors. I can't say it's at all fruity.
Boldest - McEvoy Ranch. This oil really packs a punch, with assertive flavors, dominated by bitterness and a big peppery finish. This is an olive oil lover's olive oil.
Most unique - Lava Vine. This has a nice fruity slightly bitter flavor that's markedly different from the Columela, which is also pretty fruity. This is the only one that made my cough (not a bad thing--a good peppery finish should produce a little cough).
Most well-rounded - Columela. This one has a very fruity flavor and is pretty smooth with the least bitterness. Little bit peppery on the finish.
Best value - California Olive Ranch. This one is nicely balanced between being fruity and peppery with a slight bitterness. It holds its own against these other brands and at a fraction of their cost, makes it an excellent buy.
Posted by Cook In / Dine Out at 4:00 PM