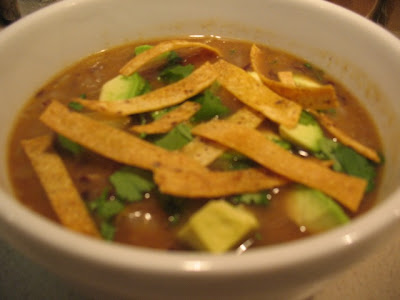 Cleaning out the freezer recently I came across this package of cubed butternut squash. I vaguely remember buying it in the fall for something I ended up not making so I tossed it in the fridge of in hopes of bringing it back for some future purpose. I didn't intend for it to remain there for 3-4 months. Would it still be good? 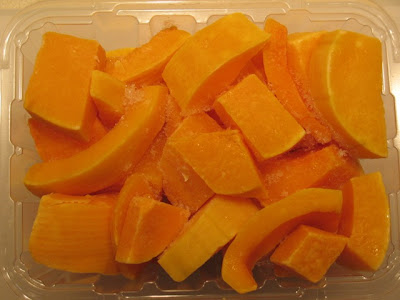 I figured that if its flavor was at all impaired, that serving it as the main flavor might be a bad idea, but what if it was one of several key flavors? I decided the Black Bean + Butternut Soup recipe from Sprouted Kitchen could be the perfect test.

This is the first recipe I've tried from Sprouted Kitchen, a cooking blog with particularly beautiful food photography. This soup actually doesn't look like much when it's done, but Sprouted Kitchen managed to make it look quite beautiful anyway. 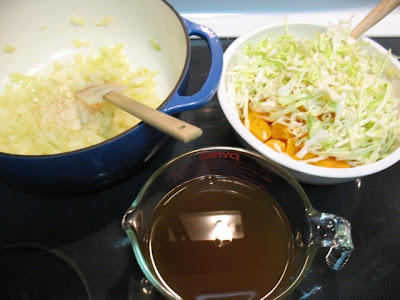 The suggested toppings for this soup are all delicious, particularly the avocado, although I also love the oven-crisped tortilla strips. 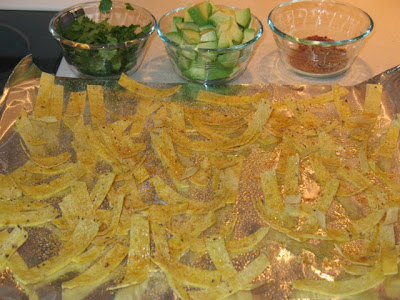 The recipe calls for pureeing the soup with an immersion blender just a bit to thicken it. I did it perhaps a little longer than the recipe called for but still had nice chunks of squash. 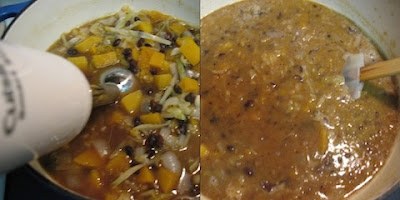 1. Make tortillas crisps. Preheat oven to 375 F. Stack tortillas and slice into 1/2-inch wide strips. Spread strips on a baking sheet, spray with olive oil and season with seasoned salt. Bake for about 10-15 minutes until lightly browned, stirring about halfway through.

2. Heat olive oil over medium heat in a 6 qt. dutch oven. Saute onion until soft and just starting to brown, about 8 minutes. Add garlic, cabbage, squash and broth. Reduce heat to low/medium-low to simmer, cover pot and cook for about 20 minutes.

3. Add cumin, cocoa powder and seasoned salt. Continue simmering another 10 minutes. Pulse with immersion blender a few times to thicken soup as desired. Serve topped with avocado, cilantro and tortilla crisps.
Posted by Cook In / Dine Out at 4:00 PM