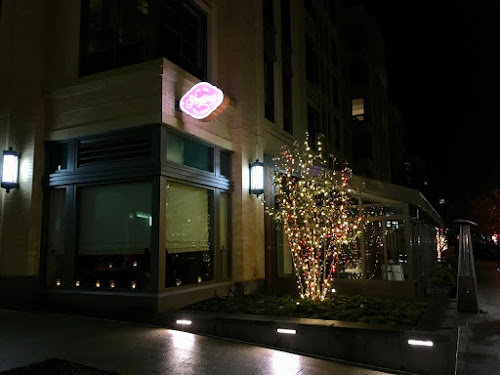 When I moved to the Van Ness neighborhood 10 years ago, about the best thing people said about its restaurant options was that there were a lot of sandwiches: Subway, Quiznos, Jerry's, Schlotsky's and Potbelly. Otherwise, there was a pretty grim selection of rather mediocre options, including a couple of subpar Chinese restaurants, an Indian restaurant I heard was not good, a combination Taco Bell/KFC and Tesoro, an Italian restaurant catering to the Days Inn guests and Tim Russert that failed to impress us enough to warrant a second visit. 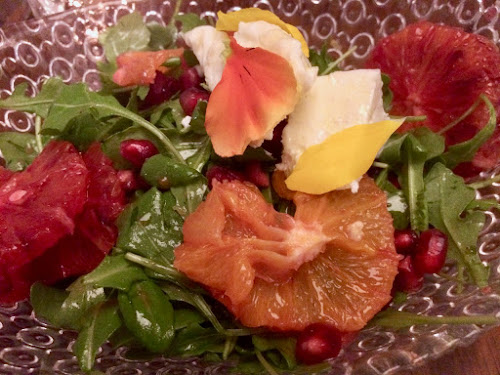 Since then, this little enclave of businesses around the University of the District of Columbia has finally started attracting some decent to pretty remarkable places to eat. All of the aforementioned places except Subway, Potbelly and Tesoro are now gone. Today, Van Ness boasts a decent pho outlet, a pretty good Thai restaurant, an attractive restaurant/wine bar, a promising market and a James Beard award-nominated bakery.

With Sfoglina, Van Ness finally gets a full-service restaurant with A-list credibility. It's the fourth D.C. restaurant from the city's reigning duo of top-quality Italian cuisine: Chef Fabio Trabocchi and his wife/business partner Maria. First came Fiola, the downtown establishment known for its amazing lobster ravioli that recently was awarded a Michelin star, then Casa Luca, another downtown outlet that's more causal and less expensive (but just as tasty), and then Fiola Mare, the seafood-focused restaurant in Georgetown. 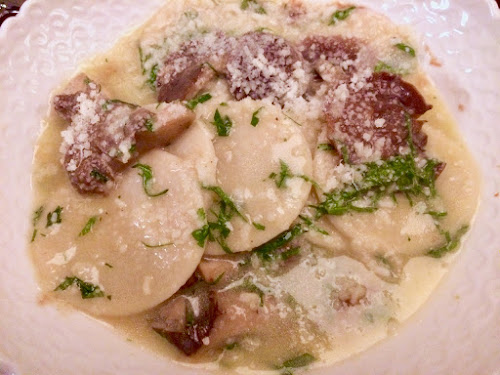 The Trabocchis' other restaurants have always been known for their pastas, which take center-stage at Sfoglina, which literally means "pasta maker." At present, the menu offers three classic pasta dishes and four seasonal choices, plus daily specials. Both of the pastas we ordered were absolute stunners. I had corzetti with mushrooms, a wonderfully woodsy flavor match for the perfectly al dente pasta coins served with a just-buttery-enough sauce offset with fresh herbs. My husband got the meaty Agnolotti del Plin, ravioli-like pasta stuffed with beef short ribs and served with a parmesan and rosemary sauce, a wonderfully wintery pasta. A side of roasted cauliflower was a great way to add some additional vegetables to the meal.

Our pastas went down easy with the restaurant's interesting selection of Italian wines, which includes about a dozen by-the-glass options like the bold Tolaini Valdisanti, a blend of cabernet sauvignon, sangiovese and cabernet franc. Want something stronger? There's also a short cocktail menu that includes a sensational "Van Ness" Manhattan made with byrrh quinquina and orange bitters. 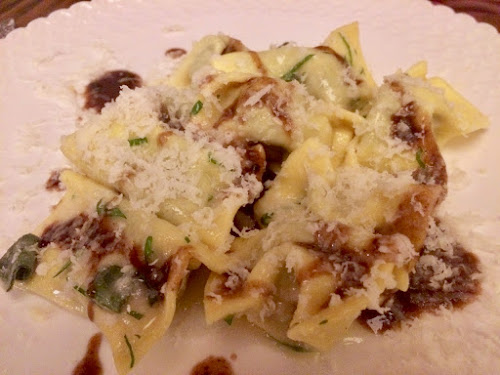 The run-up to our main course was good, although not nearly as stellar. A salad of arugula, citrus, soft cheese and pomegranate arils is a good way to get some greens into the meal. Sfoglina's house bread, a crisp, crackery affair that arrives in a bag, is more interesting for its story (printed on the bag) than its flavor. Perhaps some spreads would make this initial offering more interesting. Caramelized vanilla pudding with chocolate provided a satisfying sweet end.

Service at Sfoglina was friendly and prompt. There was a bit of unevenness, but I think that's probably because the restaurant hasn't even been open to the public for a week. One of our servers butchered a few descriptions of the menu items and another was kinda pushy with the dessert menu when we'd said we wanted to sit a bit and finish our wine. These are pretty minor issues among a team that's otherwise polite and professional.

I love the design of the restaurant, which is warm and cozy. It's a fairly small space--not nearly as expansive as Fiola or Casa Luca--fitting with its status as a neighborhood restaurant. I also really appreciate that it's not nearly as noisy as most new restaurants these days. I'd read that smart design choices help dampen the noise at Sfoglina, which I really appreciate. 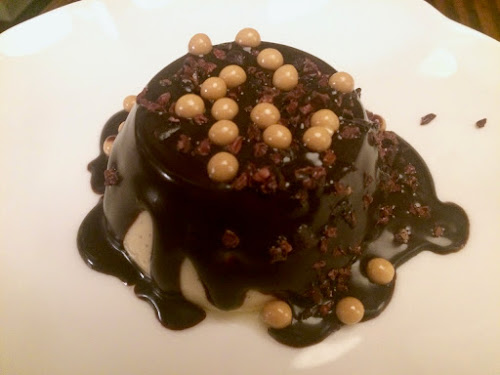 Sfoglina does face a few challenges, and it will be interesting to see how it handles them. For starters, the restaurant is sort of "out of the way," in comparison to the Trabocchis' other establishments. Van Ness, while on the up-and-up, is not a "hot" food zone like Shaw nor as highly trafficked an area as downtown or Georgetown. Sfoglina is also fairly expensive for the area--priced about the same as Casa Luca--probably about the most expensive restaurant north of Cleveland Park. As well heeled as the neighborhood is, this puts Sfoglina in a category of nearby restaurants we might enjoy for special occasions, but it's too heavy a hit on the wallet for us to warrant becoming regulars. For this reason, I doubt it will actually steal much of the tourist traffic away from Tesoro across the street.

Despite these challenges, I have high hopes that Sfoglina will succeed. It's nice to have an option like this in Van Ness, a neighborhood that has long been in need of a top-quality restaurant. Sfoglina's warm atmosphere and top-shelf pastas are an exciting draw in a corner of the city that's becoming tastier all the time.