Scared, But Not Scared Off: How a Gunman Interrupted Our Lunch and a Community Stands With Comet 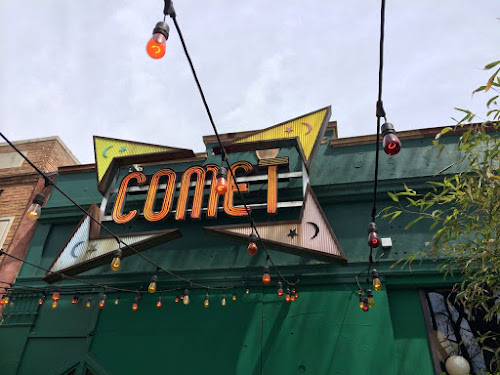 Where I grew up, I could walk half a mile to the closest main street. However, all it offered were car dealerships, and the sole business of potential interest to foot traffic, a record store, was bulldozed in the mid-80s to make way for...another car dealership. We lived in a nice neighborhood: it just didn't have good commercial amenities we could walk to.

I'm very luck that where I live now provides easy access to many amenities within short walking distance, particularly the one-block commercial strip along Connecticut Avenue just south of Nebraska Avenue that's just a few blocks away from me. It's a little too far north to be Van Ness and a little too far south to be Chevy Chase. Although technically it straddles two neighborhoods, I've taken calling it Forest Hills, which is both bigger and better known locally than the other option (Wakefield).

The area is home to a CVS, two dry cleaners, three gas stations, a nail salon, a chiropractor, a bank, a liquor store, a kitchen remodeler, a paint store, an art gallery/framing shop, some law offices, a small market/cafe, five full-service restaurants, and the strip's best-known business, Politics & Prose, a popular independent bookstore that survives and thrives in the Amazon era. It's a wonderfully varied collection of mostly independent businesses providing a sort of "small town within the big city" feel for the local inhabitants and any Connecticut Avenue commuters on their way in or out of town.

My husband and I have lived nearby for more than 10 years. We eat out in the neighborhood restaurants almost every weekend. I've met Michael Chabon, Elizabeth Strout and countless other famous authors at Politics & Prose. This is our neighborhood and we love it.

And it's under attack.

For the past month, the neighborhood's pizza restaurant, Comet Ping Pong, has been the target of a an outlandish conspiracy theory claiming the restaurant is a front for child trafficking and pedophilia. The basis of this is some stolen emails between Hillary Clinton's campaign manager and Comet's owner discussing pizza. Convinced this must be a coded message, conspiracy theorists dove into the social media accounts of the restaurant, its owner and its staff (and their friends), looking for photos to convert into nasty memes and anything else they could use to attack the restaurant. Not content to just attack Comet, they decided the whole neighborhood must be in on it, and spread their attacks to the block's other businesses.

Last Sunday, the story evolved from online harassment into something dangerous. As unbelievable as the so-called "pizzagate" story sounds, it was enough to convince Edgar Maddison Welch that children were being held captive in the restaurant. Claiming he intended to free these kids, Welch armed himself and drove 350 miles from his home in Salisbury, North Carolina, to Comet Ping Pong to "self-investigate."

That afternoon, we were sitting in Comet Ping Pong ready to enjoy a laid back pizza lunch in our favorite neighborhood pizzeria. We'd ordered our beers--Firestone IPA on tap--and pizza. Although I usually get a Stanley (sausage and roasted pepper) or a Jimmy (meatball), that day I decided to try the Momma'zu, a white pizza with sausage, fontina, ricotta and a side of meat sauce. Our beers arrived, but I never even took a sip.

A young man (who we later learned was Welch) entered the front of the restaurant and walked quickly through the main dining room, the bar area, and the ping-pong room in the back. He didn't stop or talk anyone. It wouldn't have been so odd except for the fact that he was toting a giant black assault rifle. As he walked by our table, my husband and I looked at each other in surprise. Did that just happen? Was that supposed to happen? Is that a prop for a forthcoming concert? We looked around. It happened so fast that not everyone noticed. A lot of people were happily still eating their pizza. But a few had noticed. And we noticed each other noticing, and so did the staff. And that's when the realization crystallized: We were in danger.

A few people got up and then moments later everyone did. We quickly exited the restaurant, followed by the staff. Not wanting to stick around to see if the gunman would come around from the back or out the front to shoot us, we quickly vacated the area. Soon after, the police arrived in droves. Welch, having searched the place and found nothing (of course), surrendered. He'd fired some shots during his search, but thankfully not at any of us customers. We were rattled for the rest of the day, ashamed we hadn't reacted faster, scared of what could have happened (or what might happen next) and angry, intensely angry, that one of our favorite neighborhood hangouts was (and still is) subject to an unending onslaught of baseless defamation. The next day, it all became national news.

We felt powerless and frustrated. Social media platforms have done little to nothing to stem the tide of harassment against the neighborhood. Despite having terms of use and a community standard against bullying and harassment, Facebook does not consider many of the attacks against Comet to be a violation of this policy. I've reported many of these nasty comments to Facebook, but so far, the company has found that only one of them violates its community standards. Facebook claims they "don’t tolerate bullying or harassment," but clearly the company tolerates it just fine. Having a policy it doesn't enforce may give Facebook users a false sense of security, which is a problem.

And we were concerned for Comet. Surely this would hurt business. Would the staff quit? Would Comet close? Would the attackers then turn to the next neighborhood business and continue their assault until it closed too?

Then something remarkable happened: the community came together. I wasn't the only one who was angry. Scores of people turned out to support Comet. They left flowers and messages by the restaurant when it was closed Monday. They showed their support online. And when Comet reopened Tuesday, they ate pizza. The restaurant has been busy as ever, and during the weekend, a concerted effort to encourage people to visit Comet and the surrounding businesses, known as #StandWithComet, meant Comet was so packed they erected a tent to cover the front porch as a waiting area. It was completely full when we walked to the block around 6:45 on Friday.

Yesterday, we went back to Comet. Although it's usually kind of slow on Sunday afternoons, we had to wait 40 minutes for a table. The place was packed! I ordered the same pizza I ordered last Sunday, but didn't get to eat, the Momma'zu, and it was fantastic. We also got two rounds of Firestone IPAs, our usual and favorite tap selection. We talked about TV, our jobs and the amazing response from the community. I thought I might be apprehensive about being in Comet again, but it actually felt totally normal (except for the bigger than usual crowd, but that's a good thing). We've spent so much time in Comet, that we feel right at home there--the only time we haven't felt that way was last weekend when we got chased away. It was nice to have our normal Sunday afternoon back again.

After witnessing the conspiracy theory against Comet and the neighborhood unfold, and having been at Comet when it turned really ugly, it has been nice to see the neighborhood rally behind these businesses with such an outpouring of support. In a time when people can act so bitterly against one another, it made us hopeful to be reminded that they can also be caring. The attacks against our neighborhood businesses aren't just felt by their owners and employees--us residents feel it too, and we're not going to put up with it. Our neighborhood is a special place, and we're going to fight to keep it that way. We #StandWithComet and all the local businesses that contribute to making our neighborhood a great place to live.

Want to #StandWithComet too? There are many ways to do so. Of course, the most obvious way is to visit the restaurant and enjoy its great pizza. Don't forget to support the neighborhood's other businesses too: grab a burger at Buck's Fishing and Camping, order a pizza from Besta Pizza, pick up a delicious sandwich from Little Red Fox, take in a warm bowl of Beef Bourguignon from Terasol, or enjoy a pint and a game at Jake's American Grille. And be sure to peruse Politics & Prose afterwards; maybe you'll meet a famous author or find a book you've been meaning to read. There's also a Go Fund Me effort to help Comet defray expenses from the days it was closed and the extra security the restaurant has hired. You can also show your support online, such as on Comet's Facebook page. And finally, importantly, be a critical thinker. There are so many sources for information these days, which means we must evaluate if what we're hearing and reading is sensible, factual and fair. Actions always have consequences and each of us must be responsible for our own actions.
Posted by Cook In / Dine Out at 12:00 AM