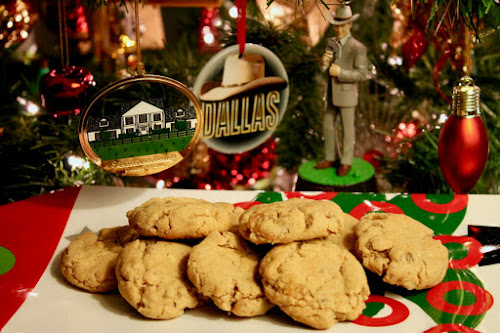 This Year's Dallas Holiday Bakeoff is a contest between the Shepard sisters. Click here for Sue Ellen's entry.

J.R. and Bobby may be the famous sibling rivals on Dallas, but they fundamentally loved each other. I'm not sure you can say that about the shows most famous female sibling rivalry: the eternal contest between Sue Ellen and her younger sister Kristin. Whenever Sue Ellen gets what she wants, Kristin seems to want it too. And if she can't have it? Well, there's a reason "Kristin" is the answer to Dallas's most famous question.

Imagine if the Shepard girls' rivalry extended to the kitchen. What would they bake to show up the other? Being the spicier (and generally nuttier) of the two, these zippy Peanut Butter Ginger cookies are perfect for Kristin. Want to up the heat? Add a little cayenne pepper. Don't be shy...Kristin certainly wasn't. Just don't eat these from a balcony overlooking a swimming pool. 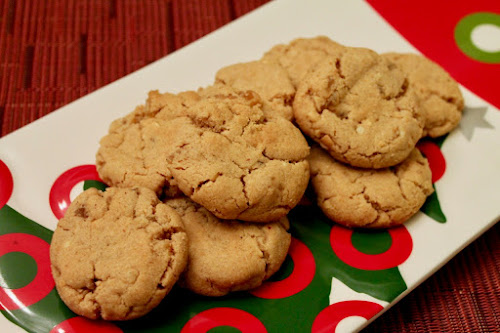 (Note: I made some changes from the original recipe, which includes an extra step of rolling the formed cookie dough in a mixture of "raw" sugar and fresh ginger, and more specificity about the ingredients. I also added a pinch of cayenne pepper for just a little more kick.)

2. Line two baking sheets with parchment or silicon liners. In a medium bowl, add the flour, baking soda, baking powder and salt and whisk together.

3. In the bowl of a stand mixer (or alternatively a large bowl if using a hand mixer), combine the butter and sugar and beat on medium-high until creamy, about 5 minutes. Add the sugar and brown sugar and beat until well mixed, then add the egg and vanilla paste (and cayenne pepper, if using) and beat until mixed in. On low speed, add the mixed dried ingredients and the chopped crystallized ginger and beat until the dough is just evenly mixed.

4. Form the dough into 1-inch balls and place on the lined baking sheets about two inches apart. Flatten the balls slightly with the bottom of a glass or a fork (the latter will make fork-grooves). Bake for 9 to 11 minutes until the cookies have spread slightly and are lightly browned around the edges. Remove from the oven, allow to cool about 5 minutes on the baking sheet, then transfer to a cooling rack to cool completely. Store in the refrigerator.